48 players descended upon the UCI esports arena for a chance to qualify for our official LoL collegiate finals at IGEC. With special guest MadLife and Shy in attendance (and an exhibition match between the two pros and lucky fans in the audience) our "Stars of the Rift" tournament marks the first of many collegiate tournaments sponsored and by Inven Global.

With and the two qualifying teams competing for the lions share of $2,750, the UCI students still in contention are taking their love of game and competition to the next level.

UCI tournament organizers and Inven Global were there at the tournament to ask participants their thoughts on the competition and what it felt like to qualify: 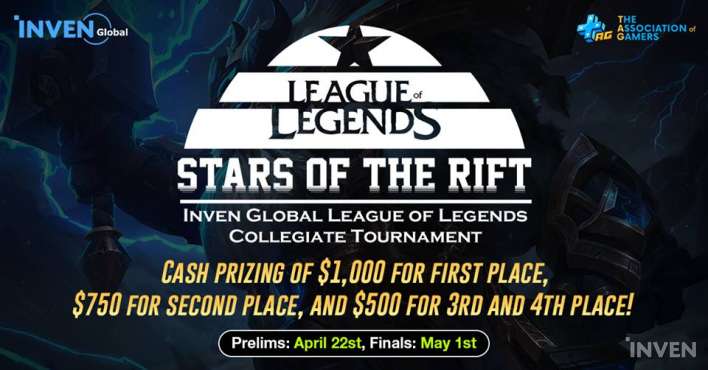 Why are you competing?  Why do you want to win?

● We’re a pretty veteran group of friends. We’ve been playing for like, the past four years, we’ve won several tournaments at UCI. We love playing in tournaments here and the tournament came up and we wanted to play. $1000 grand prize too, so it’s really exciting.
- Gurjot “Broly5001” Lambsar | Rush Hour

● We just joined for fun mostly, but we thought that - we’ve never done something like this, we always just play in our apartment. We thought it’d be a fun experience for us to have.
- Khurram “KHtheSLAYER” Hussain | Pakola Boiiis

● I’m competing because I like being active in UCI’s League community. I think it’s a fun tournament to participate in, and there’s also prizing.
- Jimmy “Multitasker” Bi | Blue Toon Link

● Eddie - our friend who’s not here yet - wanted to play in a competitive competition and thought it was an interesting opportunity to test out his skills.
- Benjamin “Litenex” Nolpho | Right Click

● We competed last year at Zotcade and this year I saw it and I was like, alright it’s time to bring the team back together. We don’t have the entire old team but last time we didn’t do so hot, so this is our redemption run with a couple of new faces. We’re hoping to make it to the top.
- Aditya “SoulwingXD” Koppula | Purple Fire Chickens

How does it feel to qualify? Have you competed before?

● It feels good but it doesn’t feel great yet because we haven’t won the finals. I have competed, I played for my high school League team.
- Ricardo “zmotionz” Martinez | Team O

● It felt pretty good. I’ve competed in high school league before, but this is my first time doing a college league. I think it’s a lot more fun as a team compared to solo queue because you have all the coordination. I really enjoy that part about it.
- Christian “DreadXaeon” Hoy | Blue Toon Link

● It feels good. I competed in the JV collegiate team and we also did BeachCon last weekend.
- Tyler “NotBaka” Li | Blue Toon Link

At every collegiate tournament, is a student who, instead of playing themselves, decides to help coordinate and run the event instead. We spoke with one such student, Hillary Phan, who currently serves as a UCI esports intern and Camp Coordinator for a girls esports summer camp. We asked her a few questions about her work with UCI esports:


How did you first get involved in esports at UCI?

I wasn't involved in any of the gaming clubs or knew anything about the new esports program at UCI. So I asked Mark Deppe (UCI esports director)  what he was planning on doing to get more women into gaming and he mentioned these summer camps for women and maybe at-risk youth. I asked him about it more after his presentation and he told me nothing actually existed yet, but if I was interested I could take on that project.

I gradually helped start the camp and got involved with the program, applied to be an intern and got it, and have really enjoyed the work and the community and everything about it.


How has the program grown since you joined?

The program has definitely grown since I've joined - and what's really cool is that I helped make it happen. The interns do a little bit for almost all the program projects and of course, we're super invested in our teams and stuff so it's been a lot of fun, making all these ideas happen and being there for all our wins and losses and figuring out how a program like ours works.

UCI is a hotbed of collegiate esports activity and, on May 1st, Inven Globals first esports conference kicks off. For our two qualifying collegiate LoL teams, it serves as an opportunity to meet legendary professional players and compete for hundreds of dollars.

MadLife and Shy will speak about the realities of their pro-life for the first time.