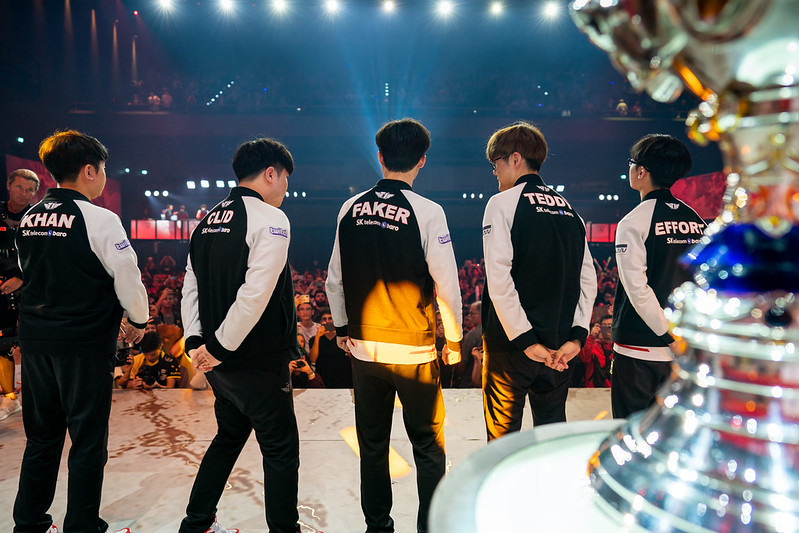 The three time World Champions, SKT - led by the only member present for all three, Lee "Faker" Sang-hyeok - press forward to the Semifinals, after taking down the European third seed. Goliath proved to be too strong today. David threw a bunch of stones, and even took a game, but it was not enough.

Additionally, Faker hit 100 international wins, the first to break that milestone. With the second place being in the 50s, Faker has quite the legacy beyond just his title being the "Unkillable Demon King."

However, Faker didn't have a signature Faker series. In fact, if anyone was the playmaker, it would be Park "Teddy" Jin-seong or Kim "Khan" Dong-ha. It was Khan on Lucian in the first game with the 8/1/4 KDA. Khan in the second on Fiora keeping the side pressure and nullifying Tamás "Vizicsacsi" Kiss's signature pick, Poppy.

Teddy had several standout teamfight performances. No matter how much pressure the Splyce unit sent down bot, Teddy always found ways to keep his damage high and target priority Splyce members to take the victory.

SKT were beatable - which may be a worrying sign for their fourth title hopes - but if Faker returns near his ceiling like we know he is capable of, and if the other members continue how they are, then they're still a top team that will look to go all the way to Paris.

G2 Esports and Damwon Gaming are the last teams to play their Quarterfinal match, and SKT will play the winner next week in Madrid.