These Hearthstone players have the best shot at becoming a Grandmaster 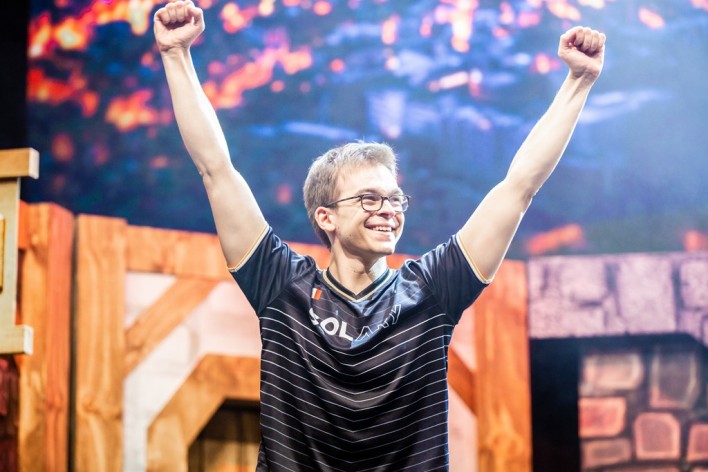 Hearthstone's Masters format is well past its first half now. The first season of Grandmasters concluded last month and last weekend the second of three Masters Tours crowned a winner. All that remains before this year's climax at BlizzCon is Grandmasters' second season, which will begin this weekend, and the final Masters Tour which is held in Bucharest this October.

In the triple-layered competition system Blizzard implemented this year, Grandmasters is the highet achievable competition. The league, comprised of some of the most well-known Hearthstone players of all time, provides a ton of exposure and, most importantly for those desiring to make Hearthstone esports their profession, it provides a good income.

To get into Grandmasters, players need to do well in Masters Tours. So with two of the three Masters Tours wrapped up, let's take a look at the promotion process, and at who might become the next Grandmasters.

How promotion to Grandmasters works

Before we get into the lists of players, some explanation needs to be done on how exactly players are promoted to the Grandmasters status. At the end of season 2 of this year's Grandmasters, the two worst-performing players per region are kicked out of the league. Their spots are taken by the two players who, over the course of three Master Tours events, earned the most prize money from said events.

However, there are some important notes to make. Firstly, as most Hearthstone fans are probably aware of, an in-game esports bundle was available for a limited amount of time.

By buying this bundle players helped the prize pool of all Masters Tours events to be raised—within days, the cap was reached. But it's important to note that, for Grandmasters invites, Blizzard will not be considering this extra money. They will be using the following table with 'Base Prizes', the prizes set by Blizzard from the start, to base their Grandmaster invite on:

So, if you head over to Liquipedia and find that players earned much more money from Masters Tours than is shown in this article, that is a correct notion but besides the point of this article.

There are two other important notes to make. Firstly, in case a Grandmaster is one of the two highest earning players from Masters Tours in their respective region, the invite passes on to the next eligible player in line. The exception is—and this is the second note—if the Grandmaster is being relegated. In that case, the invite and the relegation cancel each other out, and the Grandmaster stays in the league.

The race for the two Grandmasters invites is wide open. Well at least one is. In theory, David "dog" Caero, the winner of Masters Tour Las Vegas, is in prime position to be invited to Grandmasters next season again. It's unlikely he'll accept the invite, however, as he already was in Grandmasters Season 1 this year, but dediced to quit. At #2 we find Gallon, the player who took dog's spot for Grandmasters Season 2. So unless Gallon relegates, which is pretty unlikely both statistically and based on his incredible level of play, his spot is up for grabs as well.

The winningest players in Masters Tours from the Americas region.

Given the "Base Prize" table shown earlier in the article, with its top-heavy prize money distribution, and provided the aforementioned info about the current top 2 prize money earners, it would be a miracle if the highest-finishing Americas player at Masters Tour Bucharest would not become a Grandmaster.

The fight for a Grandmasters spot in the Americas is going to be a skirmish. With the two top players likely not being competition, the Masters Tour event in Bucharest is a now-or-never tournament. Not just for the players in the table above, but for everyone who qualifies.

It's even closer in Asia Pacific. The region will arguably be the most exciting region to follow heading into Masters Tour Bucharest, given how undecided the standings seem. The current leader, tom60229, already is in Grandmasters, so unless he's relegated he won't be receiving an invite.

Japanese player posesi may be in second place now, but he'll have to put his money where his mouth is in Bucharest nonetheless. A top 3 finish from a different Asia Pacific player likely sends posesi to the second place, which would be safe, if it weren't for the fact that Sooni already surpasses him if the Korean gets 9 wins in the Swiss stage of Bucharest.

The winningest players in Masters Tours from the Asia Pacific region.

To stay safe, posessi must perform, but it'll be a butt-clenching affair for him. There are many players who can pass him just by one high finish and if two Asia Pacific players manage to do so, posesi will still be left without a Grandmasters invite.

There's one player, across all the regions, who is 99,99% sure of his invite to Grandmasters: the Frenchman Felkeine, winner of the Masters Tour in Seoul last weekend. The only reason something might go wrong is if Zhym, the #2 at the moment, finishes second in Bucharest as well, and another European wins that event. It would result in a draw, which is a situation the rulebook doesn't shed any light on. The players will probably play a match between each other to determine who get the invite. But as said: it's incredibly unlikely.

The winningest players in Masters Tours from the Europe region.

But who will grab the second invite to Grandmasters Europe? Zhym will have to hope no European makes it to the top 2 of Bucharest. Moreover, Zhym hopes that Magoho doesn't finish third, which would place both players at $25,000 earned from Masters Tour events, in case Zhym himself doesn't manage to get seven win s in Bucharest's Swiss stage.

Of course, the players mentioned in the tables above are not the only players who have earned money from Masters Tour events; a cut off had to be made somewhere for everything to fit in this article. A full overview, adhering to the same rules laid out in the beginning of this article, can be found in this Google spreadsheet.

Besides, as has been mentioned, for very few players who already have made some profit from Masters Tour events the current standings will matter. The prize pool is incredibly top heavy. If you win, you're in. And even if a player doesn't win, not all is lost. In many cases even a top 8 finish in Masters Tours Bucharest could kick them up in the standings, right into Grandmasters' next year.

Running on Empty: Discussing how esports organizations can make the most of their funds [IGEC 2020]