Warcraft 3 marches on with its slow but steady resurgence.

A jump start 7 years in the making


In February, Blizzard released a new balance patch to Warcraft 3 -- the first one in over 7 years. The changes in patch 1.29 buffed the weakest Heroes, nerfed the strongest ones, granted wide-screen support and were followed up with yet another round of balance changes in March. Now, Blizzard developers have confirmed there will be more patches in the future, each aimed at meticulously combing through the game, changing units, tech trees, and items in the process. 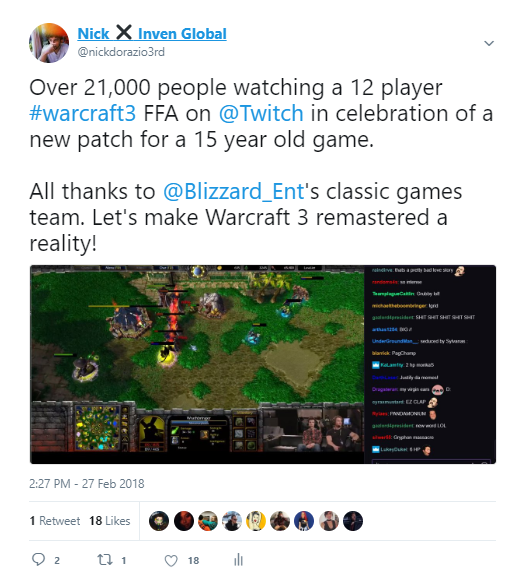 Then, Blizzard announced the Warcraft 3 Invitational tournament. Its viewership broke records for Warcraft 3 on Twitch with a peak of 22,478 U.S. viewers during its massive FFA exhibition match. If you include Chinese viewers, the stream rockets to 50,740 peak viewers during a match between Happy and Lyn.

A resurgence of players

On top of all of this, Blizzard's own Warcraft 3 servers are, finally, in a playable state. Gone is the oppressive mandatory delay that forced competitive players to community servers like Netease or W3Arena. These servers, while a much-appreciated resource, were difficult to join and frequently made playing the game a complicated technical headache for your average player wanting to join an active Warcraft community.

Now, every nostalgic gamer or curious newcomer can purchase and install the game straight from Battle.net. As if that wasn't good enough, Blizzard has also rolled out matchmaking improvements, demonstrating a consistent and reliable message to players: Warcraft 3 is getting better and better.

As a result, Warcraft 3 streams featuring ex-pros (FollowGrubby, ToD, Sjow are great examples) and current competitors (Foggy, Lucifer, a1.sok, Hawk to name a few) are more popular than ever. With a resilient competitive scene (Back2Warcraft streamed fully casted matches of professional Warcraft 3 six days in a row this week) the 15-year-old RTS is attracting a considerable number of spectators and returning players every day.

And there is a good chance Blizzard is prepared for them.

Rumors of a Warcraft 3 remastered have evolved from speculation and wishful thinking to a solid explanation for all of the maintenance and balance attention the game has received lately. It's not completely out of the question either -- the very existence of Starcraft remastered vindicates the idea. 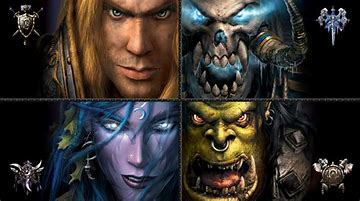 And while Starcraft remastered didn't usher in a new age of classic RTS greatness like many hoped, perhaps Warcraft 3 can. Warcraft 3 in China is still thriving -- last years Gold Championship series finals peaked at 1,416,594 viewers with an average concurrent viewership of 575,284. While China has a history of inflated viewership, it's still an important reminder of Warcraft's enduring legacy there.

After all, The World of Warcraft movie (largely panned by U.S. audiences) was an incredible financial success almost completely off the back of China's adoration of it.

At last years Blizzcon, Blizzard announced the confirmation of official vanilla World of Warcraft servers.  Before this shocking announcement, Blizzard unofficial stance on all things Warcraft was future-oriented -- they didn't want to look back

Then, the infamous "you think you want [vanilla wow], but you don't" moment by WoW production director, J. Allen Brack, happened and the backlash was immediate, loud, and enduring. In all my years of Blizzard fanboy'ing, I've never quite seen the online community so angry with the company as a whole.

Blizzard has learned from that PR blunder and now classic WoW is very much a real thing.  Perhaps Warcraft 3 fans have angry vanilla WoW players to thank for patch 1.29 and the numerous QoL improvements it brought. Blizzard's eventual concession to their anger could have very well have been the start of the developer's classic games revival.

And, If a remastered Warcraft 3  is revealed around the same time classic World of Warcraft is released, it's easy to imagine the overlap among nostalgic Warcraft fans.  Ignoring the time-tested esport and rich multiplayer custom maps, Warcraft 3 still has one of the best RTS campaigns ever made and the story told is a direct lead up to the events in World of Warcraft.

Warcraft 3, with its razor sharp gameplay and legendary custom map editor, isn't a competitive FPS or a streamable Battle Royale game. It doesn't have microtransactions, collectible cards, or flashy skins to entice whale spenders.  It offers no open world mode, would be impossible to convert to mobile and is extremely difficult to play at a competitive level.

And yet, I can't shake the feeling that this classic is the ideal candidate for a successful remaster. Warcraft 3 has always struck the perfect balance that appealed to both hard-core and casual players. Its custom games are, quite literally, the gold standard of any PC game ever and its micro intensive gameplay at the competitive level still allows room for strategy, flexibility, and even a dash of RNG to make every game feel different.

Do gamers in 2018 want the challenge of an RTS? Maybe they do and they just don't know it yet.