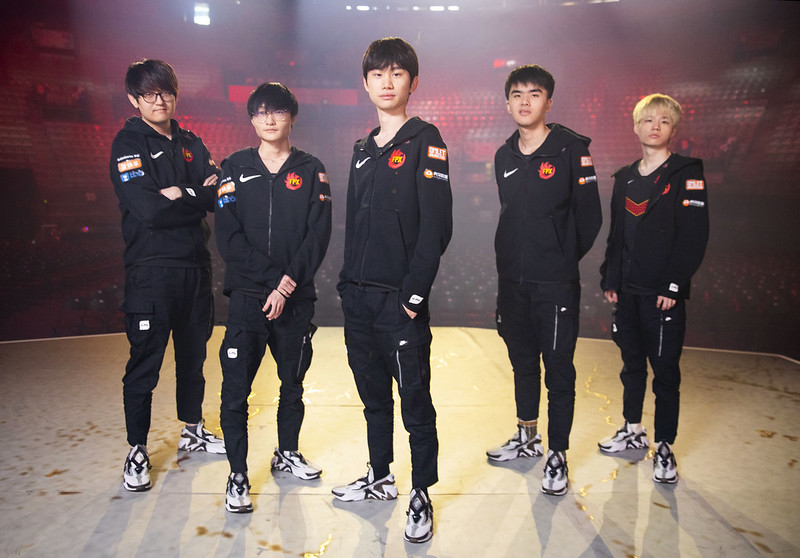 Everyone's said it, these are quite possibly the best Semifinals in Worlds history, and the first unites two LPL giants: FPX, the LPL first seed who tied the best ever record in LPL Summer, and IG, the defending World champions. To put icing on the cake, IG was the only team to give FPX a series loss this summer. If anything was sure, it was just that this would be a close series.

While it ended in a 3-1, it was one of the closest 3-1 series you could imagine. They broke the recent kill record in one of their games, went back and forth throwing and counter throwing each game they played. FPX showed up when it counted, taking out three IG nexuses, but they truly lived up to their names.

Right off the bat, FPX came alive with a Rumble mid for Super Carry Kim "Doinb" Tae-sang. Using the Clutch Gaming classic, Rumble + Qiyana combo, Gao "Tian" Tian-Liang and Doinb joined with the rest of FPX to teamfight their way to a victory.

The second game brought more of the fun, FPX picking a triple hook comp with Nautilus mid, one of Doinb's signature picks. However, Song "Rookie" Eui-jin and IG thwarted them in one of the most hectic, back-and-forth games in Worlds history. This series brought the same hype and intensity of last year's IG - KT Quarterfinal, and Game 2 is definitely one to watch if you enjoy high octane gameplay.

IG managed to tie up the series, but that would be the last game they took. Game 3 started well for them though, with Kang "TheShy" Seung-lok freezing and pressuring Kim "GimGoon" Han-saem so hard, GimGoon didn't get a single minion for a straight three minutes and fourteen seconds. That's six minions waves he never even touched. At 10 minutes, TheShy was up 40 cs and looked poised to carry the game!

Unfortunately for IG, TheShy was on a champion with an abysmal win rate at Worlds 2019, and for good reason. Once the skirmishing and heavy FPX rotation came up in the mid game, FPX snuffed out TheShy's fire, and used advantages gained elsewhere on the map - as well as more hooks from both mid and bot - to take control and close out the game.

Then at match point, IG drafted full scaling, noting that each game was bloody and lasted to the late game, they picked up Kayle for that sweet late game win condition. As expected, three winning lanes and a winning jungle - thanks to a poor level one from IG - put FPX in the lead throughout the early and mid game, but a Quadra for TheShy slungshot them ahead.

A few minutes later, in what seemed like a guaranteed silver scrapes series, TheShy and Yu "JackeyLove" Wen-Bo made a crucial mistake, pushing into the fog-of-war, both taken out in an instant giving FPX some control.

In the final teamfight, FPX managed to find TheShy again, popping him before he could use his Divine Judgement to stay alive, and with the fed Kayle dead in an instant, IG had no answer for the rest of FPX plowing into them, and the series was decided.

It was grueling, it was gory, it was what you might expect just days after Halloween, and FPX came out on top this time around. They will advance to the Finals in Paris next week, meeting the victor of SKT vs G2 that takes place tomorrow.

Important note! If you're in the States, and you have Daylight Savings, don't forget to set those clocks, that Semifinals series starts at 3am PST. Check out more news on Worlds 2019 on our Twitter.