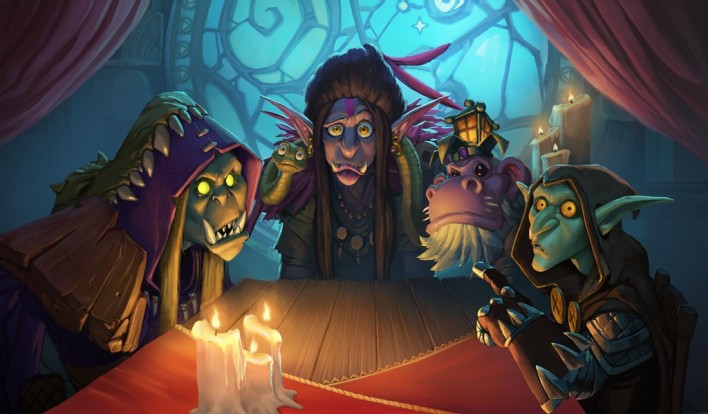 The last few days Hearthstone players across all levels of play have been rating the Rise of Shadows cards, trying to predict the cards’ power level and how they’ll affect the meta after April 9. Those reviews tend to be made fun of a few months after an expansion’s release, as there are always a handful of cards which turn out to be far more - or far less - powerful than anyone could have foreseen. That’s why this article is not going to rate cards based on their cost and effect.

In fact, this article is letting loose of all those conventions. These are the five cards that would inspire the most fear in your opponents if you slammed the card down on the table in a physical card game. In the dramatic Yu-Gi-Oh! style you hold up these cards showing the artwork, shout out the card name, and even though the opponent has no idea what the heck is going on, they know that it’s game over for them. Off to the Twisting Nether with you.

Enough talking, let's see which 5 cards will be totally OP based on everything but their stats and effects.

By now, Hearthstone players are well aware of imps's existence. We’ve seen Flame Imp, Blood Imp, Imp Gang Boss, Street Trickster, Tiny Knight of Evil… Warlocks just love using imps, even if that means an abusive, one-sided relationship is the result of it. But Warlocks will have to think twice before trying to summon Jumbo Imp, vengeful father of all hellspawns.

We’re used to imps’ high squeaky voices, moaning about the tasks assigned to them. Not Jumbo Imp though. A thunderous laugh rolls across the battlefield. A foul stench fills everyone’s nose. And then it lands, seeing eye to eye with freaking Nozdormu. It doesn’t even notice that sword you stuck in its thigh, in your measly attempt to hurt it. It sees  minions as just one thing: food.

(Jumbo Imp is a 10 Mana 8/8 Warlock minion that reads: 'Costs (1) less whenever a friendly Demon dies while this is in your hand.')

People can resort to doing the craziest things when under pressure. The adrenaline rushes, a decision needs to be made stat. How many sports players have we seen resort to performance enhancing drugs, just to make sure they’ll grab another victory? Now imagine you’re playing your regular Orcs, Goblins and Trolls, beating down your opponent’s life total. When all of a sudden they whip out… a book. And not just any book: the enemy starts glowing, their eyes burning as they read it. Move over Miss Rowling, this is a book about magic.

We don’t quite know yet what Rafaam, Dr. Boom, Madame Lazul, King Togwaggle and Hagatha are up to. Their schemes and plans are hidden as of now. What we do know though, is that they’re gonna have a rough time getting past this big fellow. Imagine the following: You and your co-terrorists are casually wreaking havoc on a peaceful, magical, floating city (not too hard to imagine, right?), and you find a big safe laying around somewhere. “MONEY!”, you think, because as one of the baddies of course you wouldn’t mind taking a couple of gold bars with you before your grand escape.

But then it happens. That safe you’re trying to crack grumbles. IT OPENS ITS FREAKING PURPLE-GLOWING EYES. Slowly it stands up and readjusts its handle-moustache. Then it takes some sort of vault-specific jiu jitsu stance. I know what I’d do. I’d run for my life. (Bonus points for the 8/10 pun name)

(Safeguard is a 6 Mana 4/5 Neutral minion that reads: 'Taunt. Deathrattle: Summon a 0/5 Vault Safe with Taunt.')

Remember how in Lord of the Rings - The Two Towers there was an orc carrying a torch to blow up the wall of Helm’s Deep? EVIL Miscreant takes that up a notch. This absolute mad lad sits inside a %#$^!?! barrel filled with dynamite and swings his torch around like he’s throwing out a line to catch some trouts on the other side of the Atlantic Ocean.

There’s little as scary as someone who fears nothing. And by the looks of it, this Kobold’s only fear is having something to fear. He’s got nothing to lose, and will take you down with him.

If you’ve been to a comedy show that had an unwanted heckler (sometimes comedians do ask for some crowd interaction, after all), you’ll be familiar with the cringes that follow said heckler’s dumb comment. If you don’t know this feeling, just take a look at the people seated behind Hecklebot - it accurately portrays the agony. As for Hecklebot itself: just look at that face. That’s a face that knows no limits. It has never heard the word ‘no’. It moves for no-one.

If anything, this well-oiled trouble seeker will be good at making your opponent ragequit - a power not to be underestimated. A philosophical love child of Annoy-o-Tron and Evil Heckler, Hecklebot has a whopping 19 ways to insult the opponent.

“Ok,” I hear you say, “but is ‘Hecklebot’ really that powerful of a name?” Well to you, you jabbering junkheap, I will happily present the German name for Hecklebot: Spottbot. And it's ready to take over Dalaran.

(Hecklebot is a 4 Mana 3/8 Minion that reads: 'Taunt. Battlecry: Your opponent summons a minion from their deck.')