The USC Game Expo represents everything a college game design program should be doing.

It can be difficult for institutions to realistically prepare college students for success outside of the safe, structured environment of academic life. This is especially true when a program attempts to ready its students for a career in video games development -- a business that seems to transform every year (let alone every four ).

In my experience, making a career out of making video games is very similar to finding a job in the film and TV industry; most employers care very little about grade point averages and degrees. The newly graduated creative quickly learns that the degree they hoped was a key for locked doors is ceremonial at best. Instead, job seekers in the creative field must arm themselves with polished portfolios and as much real-world experience as possible.

There is a reason that entry-level jobs in creative fields (to the bewilderment of outsiders) often require years of experience. It is expected that, by the time you are finally getting paid to work on video game or film, it isn't your first time doing so. This is a reality every student faces eventually.

Maybe my personal understanding and experience with these realities is why I so thoroughly enjoyed my time at the USC Game Expo.  A joint effort between the schools Interactive Media and Games Division and the School of Engineering, the expo showcased the best of student work, including the work of alumni students who are out in the real world creating video games.

It was a packed event attended by hundreds of passionate young people looking to forge their way into the video game industry. I had a chance to tour the in-class work environment of these students months before the expo and I was impressed then to how closely it resembled a real production studio. So I suppose it is only natural that the event devoted towards showing off all this work was just as impressive.

There was an aura of competence surrounding the entire event that took me by surprise.  I was, after all, expecting a showcase of student-made games. On the contrary, the offerings at the USC Game Expo (ranging from all platforms including virtual reality and table-top games) rivaled and, in many cases, surpassed games you might find at an Indie games expo or equivalent showcase.

And for this, I thank whomever it was who decided to make this expo a big deal for the students participating in it. Amanda Fan, a student studying in video game Illustration, explained the real world stakes at play for students whos games were on display:

"All the games you see here were handpicked: people have to apply and get a seal of approval...there are a bunch of industry people here asking questions and playing the games. Our professors have even made students submit their resumes for the industry people attending."

I learned that students enrolled in the Advanced Game Project (AGP) are taught about the importance of marketing and monetization during the year-long period in which they create a game with a group of their peers. This, of course, makes absolute sense and crucially avoids a common pitfall of young creatives find themselves in after pourings their heart into a creative project: if it doesn't make money you still need a day job.

A huge part of why the USC Game Expo delivered on feeling significant to both students and attendees alike is the partnership with the LA-based mobile game developer, Jam City. Instead of a handful of games showcased, the expo utilized the entirety of the School of Cinematic art building to demo over 80 games. There was a DJ, food, and drinks -- more than most attendees get at events you have to pay for.

Jam City had a booth of their own, but its main purpose was to strategically advertise open positions within the company, a win-win for all involved. After all, many attendees were students looking for work post-graduation and Jam City weren't the only local developers scouting for talent.

Talent like Ryan Zubery, Lead Director of "A Numbers Game"  Alongside game designer and artist, Quiana Dang, he was showcasing a game they made from a unique assignment. He was tasked with creating a game based on a single emotion from his life -- he chose regret:

"When one gets rejected four times in a row, you start feeling regret -- that is the emotion this game was based on. It's changed since then... it was a little too cynical. Now, it's about how absurd online dating is if you really think about it. A couple swipes and you find someone better just like that."

Zubery describes it as a "competitive dating game" and says it is a great way to get to know someone. Satirical in nature, the game will resonate with the Cards Against Humanities fans while offering more strategic depth than just picking something funny.

Or, as Quiana Dang puts it "polyamory is a top-level strat, actually"

And then there were designers like Steven Harmon. He is either a shining example of the type of video game developer USC Games creates or an endorsement of the type of students its programs attract. Self-taught for four years making "games for the soul", Harmon has published 50 games and was showcasing one of them: Ultra Dance Murder.

"Everything about this game is mine, except the music. I've made a lot of walking sims -- artistic and philosophical games -- and this is the complete opposite of that. It's simple and addicting... one kid sat down and played for three hours once."

I sat down to play Ultra Dance Murder and, sure enough, it was pretty addicting. I was playing against a stranger, but at the end maybe 20 matches, I was already beginning to get into his head: the calling card of any PvP game worth their salt. With a dash button and an interesting mechanic that makes the screen shake every time your character fires, the "dance inspired combat" moniker of the game began to reveal itself. Over it's 80's synthwave soundtrack and glitchy visuals, the game commands the attention of those who play it.

I had the feeling that Harmon would be making video games regardless of whether or not he was enrolled in USC Games. So I asked him about his experience so far with the school:

"It's a lot of hard work. I came in already making games so I was used to that. However, the most valuable part is your peers and working with so many other creative and talented people. That is really important"

The USC Games Expo will, no doubt, be even bigger next year. More industry folk will show up, more journalist will be invited but its student feel and heart will, hopefully, not change.

The games themselves are, after all, mirrors of the students who made them. I saw games about the difficulties of balancing life,  the aforementioned card game about the absurdity of online dating and, of course, it wouldn't have been a visit to a college campus if someone didn't try to get me to think more about the planet. 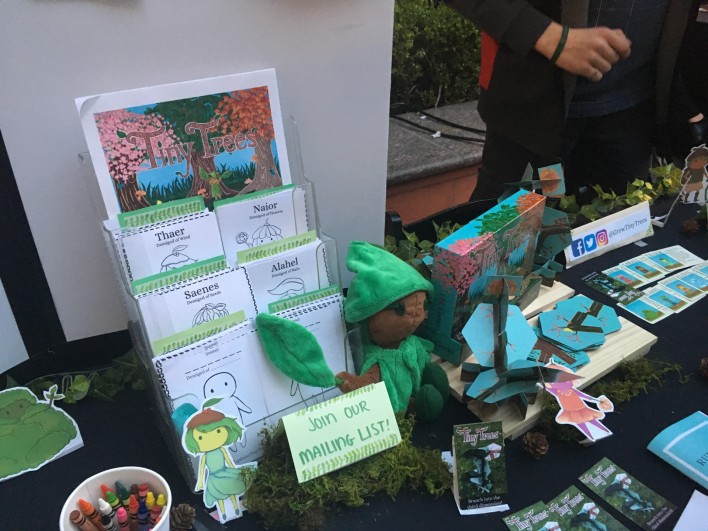 Such was the case with the game Tiny Trees, a Competitive tree-growing board game designed by Michael Perce and Joanna Y. As gleaned from Twitter,  Perce really, really appreciates plant life and the unique creation at the USC Games Expo reflects that.

If you, like many, are easily made cynical about the future of the video game industry, look out for the USC Games Expo next year. Surround your self with the creations of those who are truly looking to change the industry and, who knows, maybe you can join them. 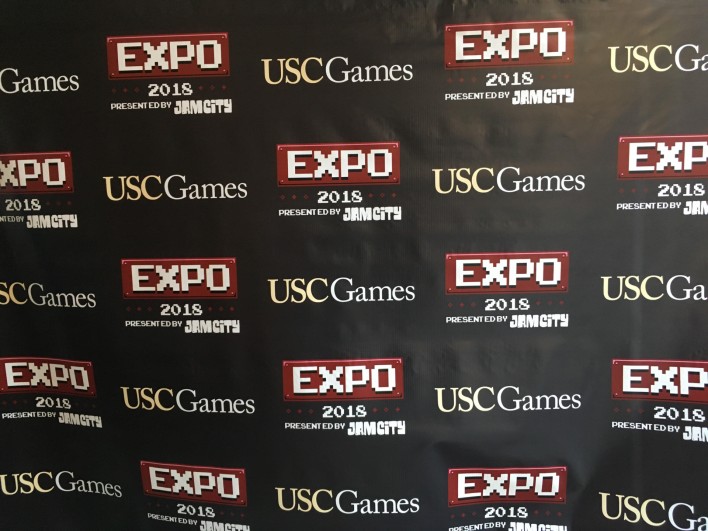