Last year, Elijah “Elk” Gallagher did at 17 what most people would never do at 30 or even 40: the native New Yorker packed up his belongings and relocated to Thailand for four months. Although daunting and scary for the average person, his move was a rare opportunity to compete in the Overwatch Pacific Championship (now Pacific Contenders) alongside team MEGA Thunder and a logical, necessary step in the furthering of his gaming career.


From there, Elk would go on to place first in the Overwatch Heroes Rumble, a showmatch held in Taipei last December, where his performance caught the eye of Yann “Kirby” Luu, the head coach of the Philadelphia Fusion who, at the time, was scouting for the organization’s Academy team.


Now 18, Elk has joined the exodus of pro Overwatch players to Burbank, California, the main hub of Overwatch esports and home to the Overwatch League. “…with the Overwatch League being here in Burbank and Contenders teams getting team houses here, it really seemed like a good move on my path to pro and me getting into Overwatch League in the future,” he explained in an interview with the Philadelphia Fusion.

Since February, he has served as the main support and in-game leader for the thus-far undefeated Fusion University, playing alongside the likes of Seung-jun “WhoRU” Lee, Kyung-bo “Alarm” Kim, and his former Rumble teammate Zachary “ZachaREEE” Lombardo. And like most up-and-coming Overwatch talent, his eyes are on the Overwatch League – but not at any cost.

“I had tryouts for Overwatch League teams in mid-season, regardless of how they went, and my mindset is ‘am I playing to get into Overwatch League right now or am I playing to improve as a player?’ And I decided I’m playing to improve as a player,” he said. “Something you can see in the Overwatch League right now is … there is not that much time for individual improvement because you’re always worried about the result the next day and that makes sense in such a competitive league. … [P]eople aren’t necessarily worried about short-term or long-term improvement [because] they just need to have that win that week.”

For now, Elk has preferred the supportive learning environment that the Tier 2 scene offers and has helped cultivate said environment. The teen has a self-professed love for mathematics – “statistical analysis is one of my favorite things, as well as just advanced mathematics and physics,” he explained – and his passion for analysis is clearly expressed in his VOD review streams. There, chat is frequently populated by analysts, coaches, and Contenders players, in addition to the average viewer, who discuss recent Contenders matches and try to improve their performances and understanding of the game.

“It’s really important to not lose track of the sense where you want somebody to be able to come from high ranked on the competitive ladder to a scrim environment and a team environment in Contenders and Overwatch League,” he said. “And I think to do that, you really need more access to information as far as how teams function in the lower ranks. I think it’s really important for the game’s health [that Contenders remains a learning environment], both in the short- and long-term sense.”

Individually, Elk says he has probably learned the most this Contenders season from fellow teammate Alarm. The 16-year-old flex support is widely regarded as one of the best Overwatch players in the world but is ineligible for the Overwatch League for another two years.

“I hadn’t [ever] really played with any Zenyattas who I would consider Tier 1 flex supports, … so being able to play with [Alarm] and ask him what I can do to support him better has really helped me grow as a teammate, I think, and a main support,” he said. “There’s definitely some pressure, right? Like, you’re on a team with WhoRU and Alarm, they’ve both proven themselves at a very high level in Overwatch, but in some ways, I think that pressure’s good … because it gives us something to prove.”

ZachaREEE, Elk pointed out, is regularly named Player of the Match despite his DPS duo, WhoRU, being a legendary pro, and being able to compete at that level builds ZachaREEE’s confidence as a player. For ZachaREEE, this Contenders season has been a massive improvement from the last when his team Renegades was unable to win even one of their seven series.

Although WhoRU and Alarm can easily soak up the spotlight, it is Elk who leads the team in-game. Aside from the expected responsibilities of ultimate tracking and shot-calling, being an in-game leader for the Fusion University requires facilitating effective communication with and between two players who are not fluent in English.

“[WhoRU and Alarm] are still in Korea, they’re young, [and] they’re not fluent in English, so it can be hard in-game for them to voice their opinions and communicate,” he said. “[I try] to figure out simple terms I can use with them and [find] general ways to keep team atmosphere up, especially when sometimes they can get frustrated and not know how to explain it.”

Other than that, Elk says that much of his job is to act as a counterweight for whatever the team is feeling. “If the team’s being negative at the moment, I try to be very positive. If everyone’s super hyped up in a match, I try to bring everybody down and [refocus] on the game.”

Fusion University has been unequivocally successful this season. They did not drop a single series in the group stage (despite several close calls) and are the favorites heading into playoffs this weekend. Unfortunately, the team will be without their head coach, Aaron “Aero” Atkins, who Elk praised as “the best coach I’ve been with, especially for player development.” 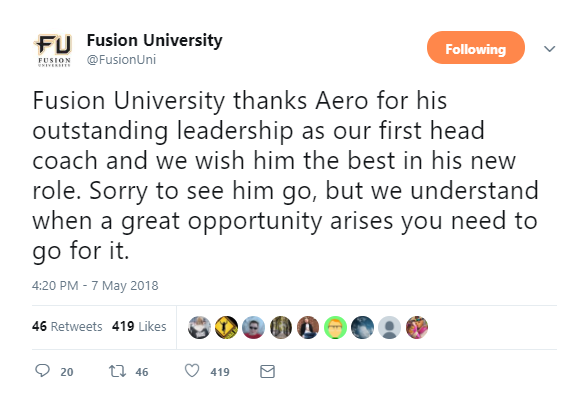 But the team is still confident. Fusion’s first match will be against OpTic Academy, a team they narrowly beat 3-2 in week two, but for once, WhoRU and Alarm will be competing on LAN without high ping. Still, Elk said, “OpTic are probably our hardest match out of all of the teams we could play. I think [they] are the second best team in Contenders right now.”

Fusion has looked dominant and resilient thus far, and its players, although young, recognize the future that lies before them in competitive gaming. None are to be overlooked in the coming seasons of the Overwatch League, least of all Elk whose skill, dedication, and leadership now has the team poised to take an undefeated season.