Player quotes from the HGC Western Clash: "Breez has really stepped it up this tournament."

The following are transcribed interviews with players from the winning Heroes of the Storm teams after their Day 2 matches. All players replies will be italicized and the questions not.

Congratulations on your win, your next matchup will be against Tempo Storm or Team Dignitas, do you have a preference as to who’d you’d prefer to play?

Snitch: I believe for us it is not a huge difference. I think Fnatic would be preferred for the sense of comfort since we’ve played them throughout the beginning of the year already but, at the same time, they’re playing with a new player. We haven't scrimmed against them with SonicLeBeast playing on that roster so it’s a bit of unfamiliarity there. I don’t think there’s a difference between each team. Both teams are very good, both teams play different styles so we have to prepare for each and play our best against them.

In Game 1 the decision was made to use a Divine Shield to secure the Dragon Knight. What’s the decision making process between using that on an objective or saving it for a team fight?

Zaelia: I was the one on the Uther who used the Divine Shield but this was something that was already talked about before the game and in-game when we were rotating around the map. In the moment we saw a good opportunity to use it and it was a team decision and team effort to make it work. 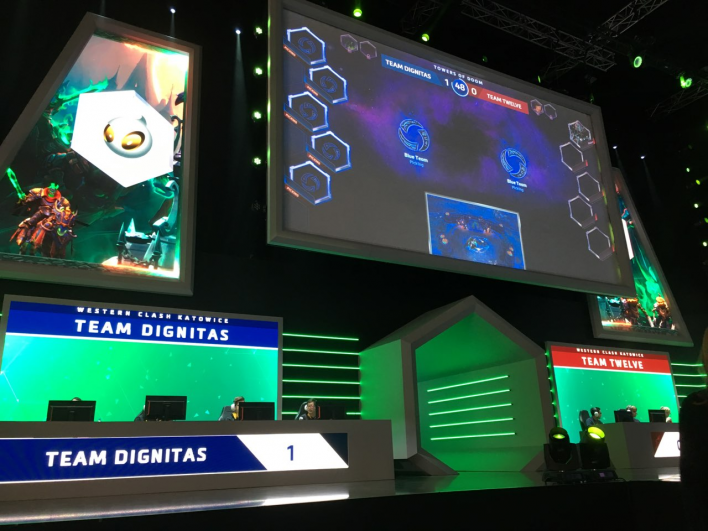 You guys were the favorite going into the tournament. Who do you think is your biggest competition here and why?

JayPL: When you are the favorite, every map you drop adds pressure but for this tournament, Tempo Storm or Fnatic. I thought Team Freedom would be a threat because of how they looked in scrimmages but they’re out. We feel confident against every team so we don’t expect too much resistance from other teams.

Throughout the first six league play matches you dropped one map but in the last five maps you’ve dropped five. Is there a concern you have been figured out by your opposition?

Snitch: I think it’s natural that when we’re on the top that it’s difficult to maintain that top status. It’s a lot harder to consistency innovate and re-inventing our play to stay on top of our opponents. We’re not too pressured if we drop a map here or there as it happens from time to time.


For quite some time NA has proven inferior to EU when it comes to LAN tournaments but thus far in Western Clash they’ve had some success, what do you attribute that to?

Snitch: I think it’s very clear that the changes that North America made throughout 2018 HGC have benefitted them amazingly. The new lineups are very dedicated. We have had series scrim practice against Team Freedom when they came to Europe for a boot camp which, I get, is a big step for a NA team that they’re putting resources into boot camping, especially in Europe. It’s a big change in the mindset. The lineups look better, they seem more synergized and have more talented players in general.

Observing your team over the last day or two, Jun seems to be a very relaxed individual as he calmly celebrated post-game while the rest of you were hyped and fired up. In the promo video for your team he was making snow angels, is he just a lose and relaxed guy normally on the team?

Fan: I think at that point Jun already forgot we won the match

Jun: I don’t really get excited too much but it might be different if we win the whole tournament. I’ll be popping off.


Throughout the match, Fnatic had a few opportunities to capitalize on your mistakes and they were able to take Game 3 as a result. What did they do right in those situations?

Cattlepillar: I think it was slight communication issues on our part. We were a little stressed and needed to calm down and play our game. We got all of our throws out of the way early so no more throws going forward.

Fan: That was there only opportunity to win those games and they got desperate. It had less to do with them doing something right and more to do with us making mistakes and letting them get back in it. 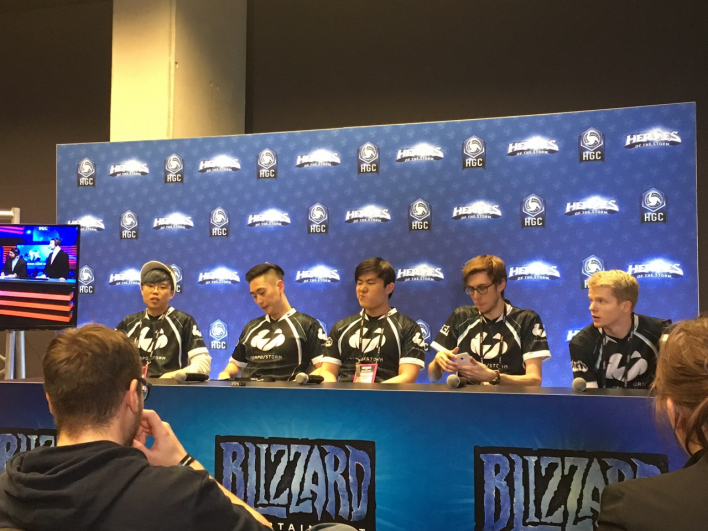 This wasn’t your typical Fnatic team as Quackniix was out and SonicLeBeast was in for them who you’ve never really seen before. How do you prepare for an unknown opponent such as the substitute player?

Cattlepillar: We have a general idea of the heroes he would play and that the team would try to work him into their game with what he was comfortable with. Our predictions were pretty accurate. He did a ridiculously amazing job. This was a first LAN for him and stepping up and playing that well was impressive.

Glaurung: Prodigy. For him to come to a LAN and play as well as he did, prodigy.

You’ve shown the potential to beat teams like Dignitas and Fnatic but drop matches to lesser opponents such as Liquid and Tricked. Where does this inconsistency stem from?

Adrd: I think a lot of what you talked about was the first couple weeks of HGC. We did not have much practice and are a pretty new team. We are inconsistent because of the fact that we are a new team and face a lot of challenges because we essentially changed three players on the roster and will get more consistent in time. 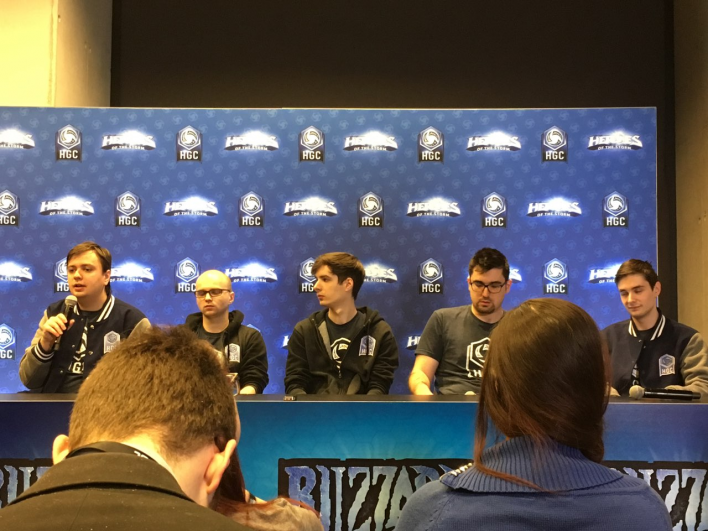 Tyrael is a hero who has been drafted a lot in Western Clash and HGC League Play but his win rate is exceptionally low. Why do you think teams continue to draft a hero who the wins don’t follow?

Mopsio: The Tyrael win rate is pretty low in League Play because we have a lot of practice against each other and know which hero plays well on which map against which opponent. He is a very safe hero to pick right now and at this tournament, we are trying to play the easier stuff than we do at the league.

Cris: I don’t think win percentage matters too much at competitive unless it is a hero with a 90% win rate on 20 games or so. Greymane’s win rate is atrocious but that’s not going to stop us from picking him.

Shad: Because he’s drafted earlier in drafts, teams have the ability to counter pick against him a lot compared to if we saw him picked later the win rate might be higher.


In a couple of the games, you had Cris as the hyper carry where he was the sole source of damage as Tracer and Greymane. Is that a lot of pressure to put on a player?

Mopsio: I think with a good tank, an assassin player can feel confident. We all try to play around Cris and his playstyle and our communication with each other if he needs help. If it didn’t work we wouldn’t play it.

Cris: The only pressure you might face is if you pick a Tracer against a composition where picks are hard to get and you can’t kill anything. Other than that, there’s no real pressure.

Does Breez have some pent-up anger inside him based off his Diablo play in Game 2? He was wrecking people. What was the discussion mid-game as he was going to town?

Badbenny: Breez has really stepped it up this tournament, especially with Diablo. He played well with Diablo in the two games against Tempo Storm earlier. He wants revenge for his fallen former teammate schWimpi.

Can you please explain how you ended up finding a sub? Did you just go the Heroes’ ladder and find someone?

BadBenny: During the boot camp in London, that’s when Quack got sick first, so we had to cancel the practice or find a sub. We practiced some games with Makke from Tricked and we asked if Sonic wanted to try and he did and then we had that option in the back of the head in case Quack could not play.

SmX: We went on the grandmaster leaderboard and looked on the top 50 and picked a few who were not on an HGC roster. We asked Sonic and he said sure.

Sonic: When they scrimmed with me, I didn’t know anything. I guess they had this plan in the back of their mind but it was a way for me to practice with some HGC talent. When BadBenny hit me up and asked me to come to Katowice, I was, of course, shocked. It was one day and it was the next day where I would play on the grand stage where I never played before. I’ve never been to a tournament before, I wasn’t even a spectator ever. I still have a little bit of trouble to grasp it fully. 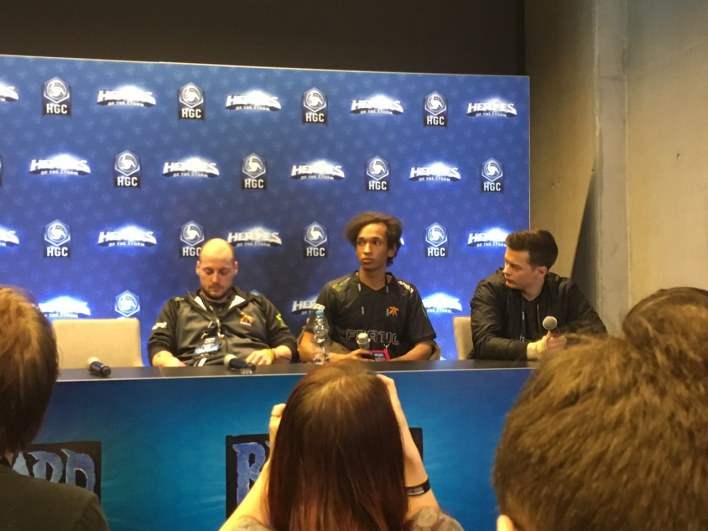 How has the team fit your style since the team during drafts will look over to you for advice?

Sonic: What’s known about me is that I have a very small hero pool but I am a specialist and carry Hero League games. I know my hero pool will be a little bit of a burden for the team but I think the heroes I play right now suits the meta and the playstyle of the team. I synergize well with Mene and we have a lot of potential.


Do you feel that once you found out that Quack wasn’t going to be in the tournament your expectations went down a little bit?