Blizzard gathered 113 of the best Overwatch players in a single room -- here is what they talked about.

As the Overwatch League gets closer every day, Blizzard is taking every step to ensure it's premier esports league lives up to the immense expectations the entirety of esports has placed on it. With baited breath, industry experts, prospective investors, and esports fans all over the world have been waiting to see if Blizzard's global league will flourish during its first year or topple under the weight of its own ambition.

While the millions upon millions of dollars are being spent building the foundation for a prestigious esport league, there still remains an unpredictable factor that, if managed poorly, could spell disaster for the leagues future. At the end of the day, the OWL's success lies in the hands of its players and their ability to represent the highest caliber of Overwatch player.

That means toxicity, poor sportsmanship, cheating, or any other unbecoming behavior becomes a real liability for the league. This international group of professional Overwatch players, with a collective average birth year of 1995, will have to play nice for the cameras and for the public at large. For many, this will be the first time in their life their actions and words will face the scrutiny of a public audience who expects maturity and professionalism at all times.

Not something the average 17 or 20-year-old is used to facing. Thankfully for these players, Blizzard is more than willing to offer guidance. This week, OWL players flew all around the world to participate in a player summit hosted by Blizzard in an attempt to educate the league on some of the social pressures they will face in the upcoming year.

While hours of social media finger-wagging may not be the most interesting thing in the world to a room filled with competitive gamers, it is an important message on the type of clean league Blizzard is committed to running. Supposedly, the average OWL player salary is between $80,000 to $120,000 a year, so behaving on Twitter and Twitch shouldn't be too hard.

This summit and its guidelines isn't the first example of Blizzard no-nonsense OWL policies. Just recently, Sado of the Philadelphia fusion was punished with a 30 match suspension for account boosting, immediately costing his team multiple match losses in 1st and 2nd stages of the league. In the same month, Dallas Fuel's xQc was banned from playing Overwatch for 3 days for abusing the reporting system.

The message is clear moving forward: if you set a bad example as an OWL player, you will be punished.

One of the most valuable parts of any player summit is when the pro community gets to interact directly with the development team. During the OWL player summit, players were given the opportunity to provide feedback on everything Overwatch, including game balance and design decisions that may directly influence the future of Overwatch. 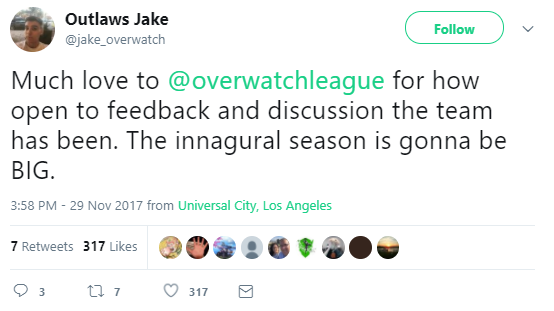 Pro player interaction between developers isn't always guaranteed to prove useful, so the glowing review from JAKE provides some relevant insight that confirms the Overwatch teams already positive reputation for listening to player feedback. Only the players know for sure what was being discussed (and a lot of feedback happens in settings more casual than most would expect), but you can bet the issue of one-tricking and its effect on the game was discussed at length during the summit.

With what appears to be a successful player summit in the bag and the recently announced "Path to Pro" that gives unknown players a clear path towards entering the OWL, competitive Overwatch is running with a lot of positive momentum leading into the December 6th start of the preseason. 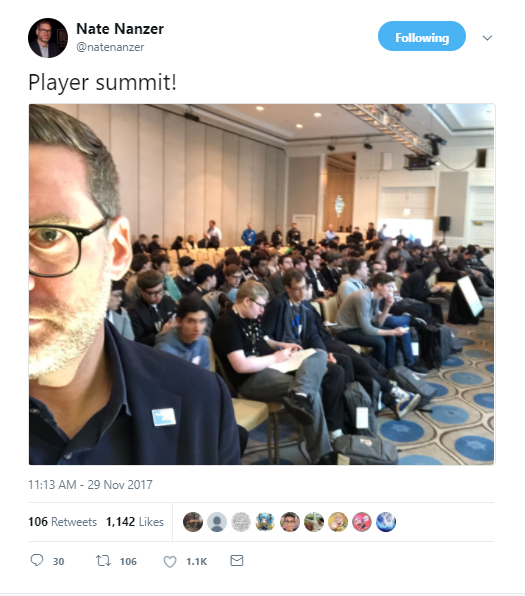 Cheer up, Nate! Things are looking good for the league.