During the live stream reveal for assault on Volskaya Foundry, Kent-Erik Hagman, lead hero designer, answered a few questions about the competitive nature of Heroes of the Storm. He explained how his team has been looking at ways to "remove RNG" from battlegrounds that show a lot of competitive popularity:


"If we standardize these things, it allows a meta to develop...If we always know that blue sides angel is going to be on top, we can go 4-1 split and a 1-4 split-- and now, suddenly, a metagame or strategy can develop around that. Which can then develop counter strategies. If those take root, counter, counter strategies! But then, if the original strategy... you know! *laughs*

You can start to develop these cool things just by us giving the players more information. And that is really what this about. We are exploring ways to do that for the battlegrounds that have elements of randomness to them. We think that they are good, but we think they can be better.


Examples including telegraphing the exact location that Cursed Hollow tributes will spawn, or introducing a set order for Immortal spawn locations on Battlefield of Eternity. If implemented, these type of changes will remove the arbitrary luck associated with these maps and, no doubt, make the competitive crowd happy.

These type of announcements are important for the Heroes communities, as the last battleground release, Hanamura, was almost universally loathed. Un-fun mechanics, imbalanced merc camps, and an emphasis on pushing lanes were just some of the battlegrounds problems, but that is the risk you run when your goal is to push to envelop.

However, the newest announced battleground seems to have benefited from the painful lessons Hanamura taught. For starters, the objective on Volskaya Foundry is easy to understand and brings teams together in 5 vs. 5 combat. These centralized objective maps tend to lean towards massive team fights, something that is at the core of Heroes of the Storm's appeal.


A show match between Gale Force esports and Team Freedom will take place on September 21st and feature the new battleground. This will be the first look at how the battleground operates in a competitive setting, complete with conveyor belts and two-player controlled mechs. 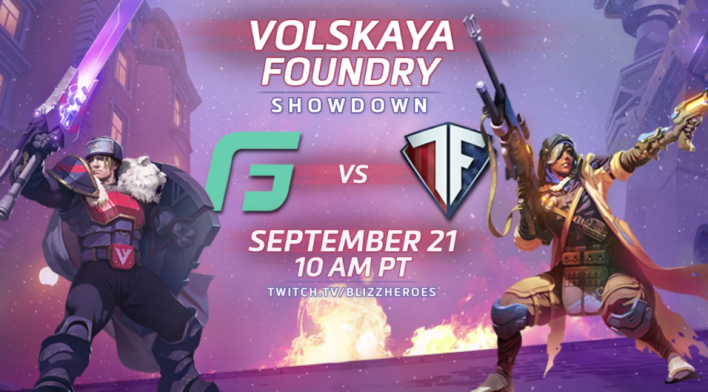