Junkrat and Ana join Heroes of the Storm along with a new battleground!

Heroes of the Storm fans were treated to huge news this morning, as it was revealed on the HGC stream that Junkrat and Ana will join the Nexus roster. In addition to these reveals, a new battleground and a swarm of new skins, sprays, and portraits were announced.

No details on Junkrat have been shared, but we were able to ask Kent-Erik Hagman, Lead Hero Designer about Ana and what her role will be in Heroes of the Storm. A new support hero is particularly rare when it comes to Heroes of the Storm, but Hagman assured us things are changing for the better:

“Ana will not be the last healer you will see in years. Going forward, we want to be much more conscious about how many healers and how many true-solo tanks we are releasing this year. It is something we haven't been doing the best on,  but we are on course to do much better. Ana is just the latest result of that.”

When asked about the type of healing we should expect from Ana, Hagman assured us that she would be capable of solo-healing for a team. However, he went into detail explaining why her healing numbers might look different from other supports:


" Some of our healers have what we call white healing. It’s healing, but not always impactful. Someone like Lucio always has tons of healing because it’s passive and always happening. It's like Gul'dan and Lunara always having tons of damage because of their periodic effects, we call that white damage as well-- it’s all Inflated numbers.

"Ana doesn’t have white healing because each skill shot is impactful and in the moment. Each heal has a target for a reason, assuming she can line up her shots. When it comes to in game, she can solo heal with the rest of them. Just like an Uther or a Rehgar."

More information on Ana, including abilities and developer insights will be available soon.

Ana will be released alongside her Shrike skin from Overwatch, while D.Va and Varian also enjoy two new skins. Destroyer D.Va and Commandant Varian offer a fresh change from their cute / fantasy aesthetic.


Perhaps players will pair them with the two new mounts, the Celestial Raptor (it's best not to think about why this exists) and The Invisible Horse (same thing).

EDIT: The trailer video released after this article was written featured quick shots of the following new skins and tints. Below are the updated images. 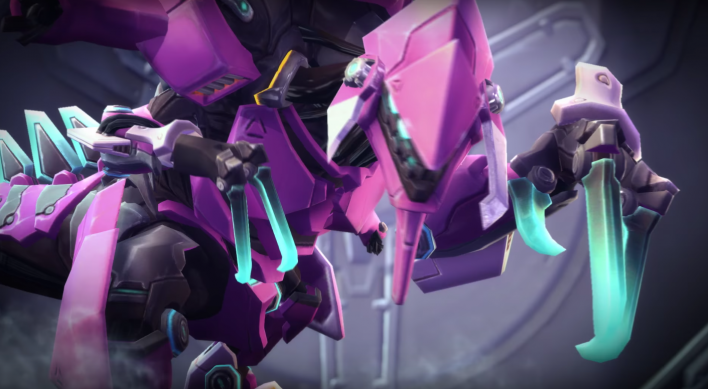 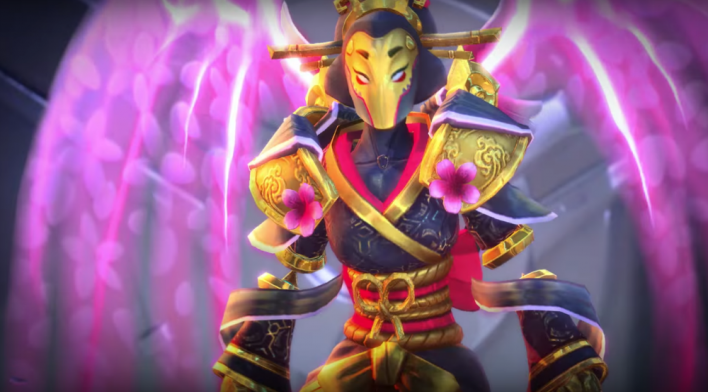 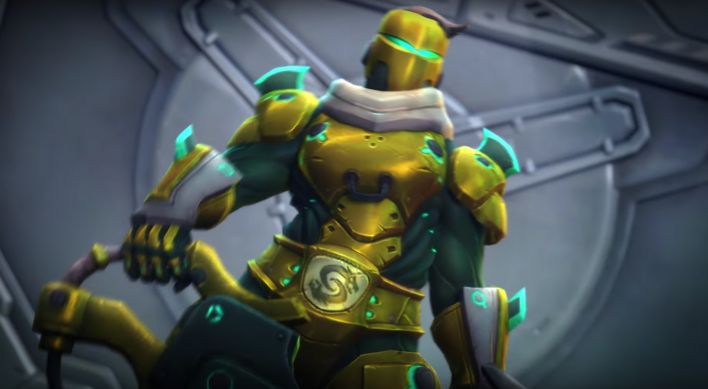 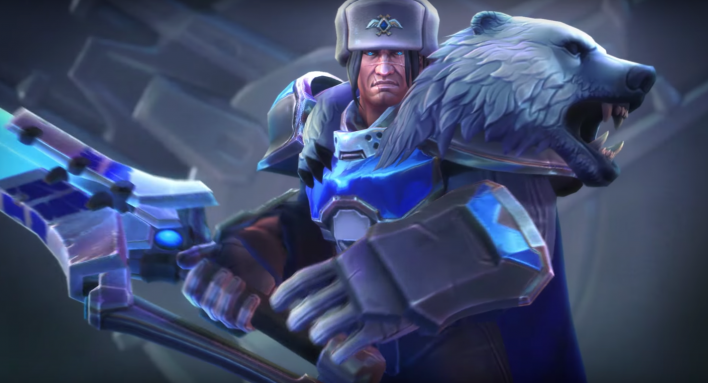 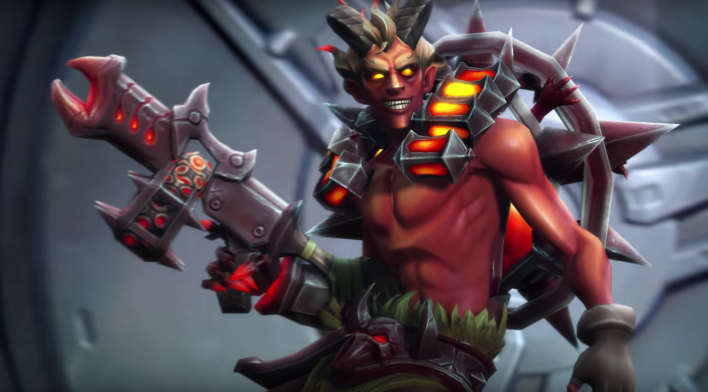 
Volskaya Foundry is an Overwatch themed battleground with three lanes. The unique objective of this battleground is three individual Overwatch-style capture points that take turns spawning. Once captured, players can summon a Triglav Protector, which is essentially a giant Cho’Gall!

Two players control this objective with one pilot handling the positioning, movement, and a charge ability that can deal tons of damage. Another player, the gunner, is in control of the offensive capabilities using three different abilities.

We had a chance to ask John DeShazer, Lead Battleground Designer about the new battleground, and he was excited to share details. It's no secret that Hanamura was the worst received Battleground in Heroes of the Storm history and a big part of that had to do with the often unclear objective and exhausting game states it left players.

This time around, DeShazer assured us that a "clear understanding" of the objective is the secret to this battlegrounds success:


"When everyone understands the objective, everyone can have a good time and the game becomes more strategic"

He went on to explain how the battleground is best compared to Infernal Shrines, as there are 3 different objectives points, but only one spawns at a time. This fact alone should rest any concerns of another Hanamura style battleground where there isn't a clear objective to fight over.

The Triglav Protector will spawn once the capture point reaches 100%. The mech is only able to be channeled by the team that won the objective.The first person that channels onto the mech is the pilot, the second is the gunner.


One interesting part of this objective is that damage will NOT prevent players from entering the mech, only hard CC like a stun or a fear. It is also worth noting that the first player to enter the mech can switch to the gunner position if they choose.

According to DeShazer, the main inspiration behind creating the battleground was how awesome mechs are:

" The core goal for us when we develop the battlegrounds is to really find that fantasy we can bring to Heroes of the Storm. So, with Overwatch, we really wanted to bring in a giant mech. It was the number one reason we wanted to create Volskaya Foundry! *Laughs*.

We thought the robot would be really fun to play in Heroes of the Storm."


True to Overwatch style capture points, this battleground will feature the overtime mechanic. Progress will not increase from 99% to 100% as long as one enemy player is contesting the point. However, unlike Overwatch, at least one player needs to stay on the capture point to maintain control over it.

- A Rocket Fist that shoots at enemy heroes. This first roots an enemy hero or disables a structure.

- A Shield emitter that gives the mech 25 armor. This also gives an AoE shield to all allies hero and, according to developers, makes the mech a fantastic team fighter.

- A particle cannon that, after channeling with a range that constantly grows (think Gazlowe laser), it eventually fires a ball of energy at the location, doing AoE damage. This allows the mech to target fleeing heroes with ease.

- A Gattling cannon that, when activated, fire projectiles at the cursor location. Like Gall's Shadow Bolt Volley, players can drag your cursor to whatever they want to shoot. The shots do double damage to enemy heroes and normal damage to enemy structures

- The last ability fires a giant laser down a line, doing little damage. However, a second later, it does a devastating amount of explosion on an identical path. This shot gives players time to avoid, but if they don't, it does tons of damage.

There is also a new map mechanic, conveyor belts.

These conveyor belts work just as they do in any other video game-- when you stand on them they move you in a certain direction. The existence of these belts makes each part of the battleground different from each other. Because the conveyors move in different directions, players will have to approach each capture point differently, as some belts move you closer towards enemies, while others can help you easily retreat. 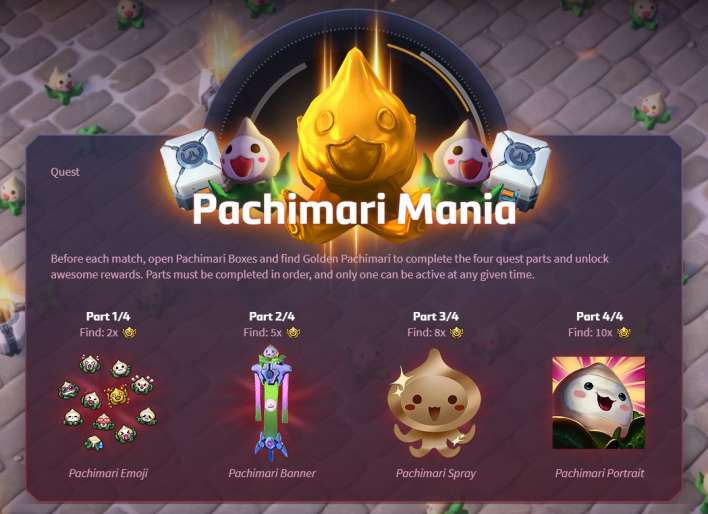 At the beginning of each round during this event, players will have to search for the Golden Pachimari among a sea of loot boxes. As each player opens a loot box, your teams movement speed increases! Things get chaotic quick, but don't forget the goal! When you collect the Golden Pachmari, you earn new portraits, emojis, banners, and sprays. You collect each one of these rewards once you find 2, 5, 8, and 10 golden Pachimaris as a team.


Played on a special S shaped one lane Industrial District battleground, this new brawl pits two teams against each other, each starting with a mech that will continually spawn for the team. This mode allows for a fun, no pressure way to learn how to control and best utilize the new battlegrounds objective!

According to Blizzard, Ana will be released first with Junkrat following. At this time, no information on these specific dates has been given to us, but a new post will be made with updates when the time comes.

Overwatch fans once lamented Widowmaker's inclusion in Heroes as just a Nova skin, but I think most can agree that Ana more than makes up the loss. 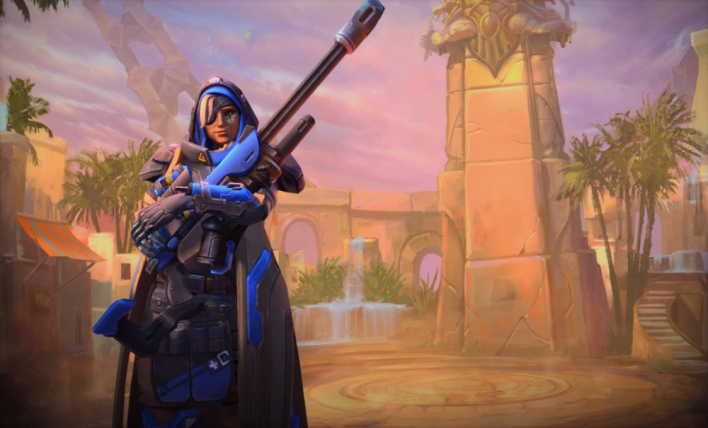