In the first game of Liiv SANDBOX vs. DWG KIA, top Fizz appeared. It was the first appearance of top Fizz in 1406 days. The top lane was the first battlefield as Kim "Canyon" Geon-bu's Pantheon ganked the top lane twice to kill Park "Summit" Woo-tae's Gnar. Kim "Croco" Dong-beom's Udyr responded with another gank to kill Kim "Khan" Dong-ha's Fizz. The game was rather balanced until the Rift Herald fight. With Cho "BeryL" Geon-hee's Rell initiated a fight fantastically, DWG KIA collected three kills. This created a big snowball and DWG KIA took the game.

First blood came at the 11-minute mark in the second game as Liiv SANDBOX cut off Canyon's Graves in a dragon fight. However, DWG KIA didn't back off easily. They dove into the bot lane and killed the bot duo. In this game, Heo "ShowMaker" Su's Ryze scaled amazingly well. Although Liiv SANDBOX collected a teamfight win around the 20-minute mark, Jang "Ghost" Yong-jun's Kai'Sa and ShowMaker stopped Liiv SANDBOX's Baron attempt. Moon "Route" Geom-su's Samira tried to turn the game with great positioning and fights, but it wasn't enough. After gaining the mountain dragon's soul, DWG KIA took their 6th win of the season. 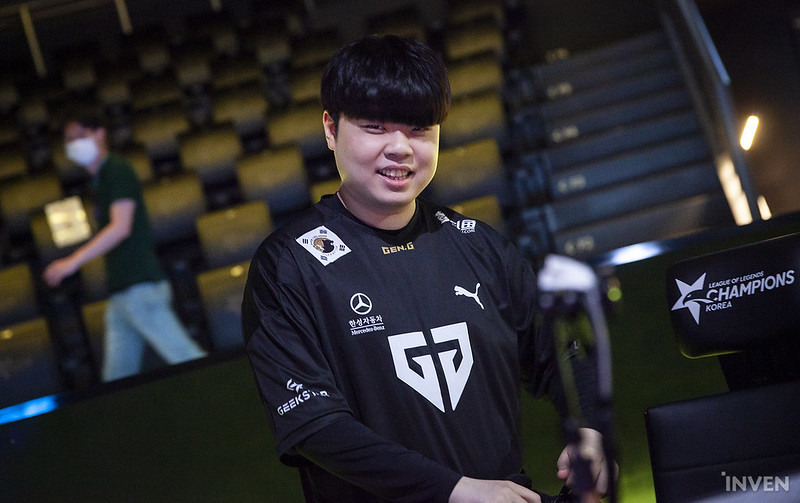 Gen.G’s first game against Nongshim RedForce was incredibly dominant. From the start, Gen.G showed their strength as they demolished the bot lane. Gwak "Bdd" Bo-seong's Syndra collected a solo kill as well. Nongshim RedForce collected two dragon stacks and a Rift Herald, but they gave up kills in that process. Park "Ruler" Jae-hyuk's Aphelios even picked up a solo kill against his counterpart. After this point, the gap was way to big to close. Fight after fight, Gen.G collected aces and Ruler got a quadra kill. With no trouble, Gen.G finished the game.

The second game was closer, but not too different. Han "Peanut" Wang-ho's Nidalee had a good start as he cut off Kim "Rascal" Kwang-hee's Pantheon with a gank, but Gen.G was ahead in CS in all lanes. Especially, the priority in mid and bot lanes were heavily in Gen.G's favor. After a big teamfight win at the Rift Herald, Gen.G snowballed througout the game. There was nothing that could stop Gen.G. Although there were a few accidents along the way, Gen.G destroyed Nongshim RedForce's Nexus in 32 minutes.