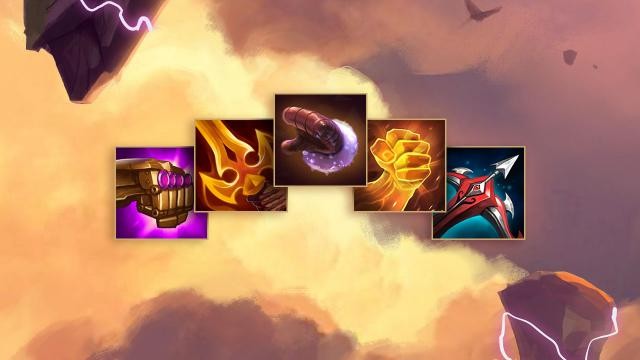 An exciting shake-up awaits Teamfight Tactics: for the first time since its release, new items will be introduced. One of those is the item component Sparring Gloves which, when combined with any of the other item components like B.F. Sword or Tear of the Godess, will turn into one of 9 items. Following some "crafting recipe rotation" two other items have been added as well, which are created from existing recipies. Finally, there's a brand new random drop.

The items are available in the Public Beta Environment servers at the moment, so they might be subject to change. If they do make it through, the items are slated to hit the live servers in patch 9.18, two weeks from now.

Punching away with Sparring Gloves

Like most other crafting components, the Sparring Gloves are pretty unimpactful by themselves. They provide the wearer with 10% more chance to dodge attacks and a 10% increase in striking a critical hit.

Developers' note: "We didn't want to disrupt the balance of offensive and defensive options, so we made Sparring Gloves capable of either: If the finished item is offensive in nature, the statline shifts to +20% Crit, if it is defensive, it shifts to +20% Dodge."

Giving Thief's Gloves to a champion will do something very interesting: it'll prevent that champion from wearing any other items. Why you'd do that? Well, on the start of a round, Thief's Gloves adds two random items to the champion's inventory. The only way to influence the RNG of the items is by levelling up, as the items scale with the player's level. At the end of the round, the two random items disappear.

Made from: Sparring Gloves + Tear of the Godess

The Hand of Justice also brings some RNG with it. The champion wearing it can be granted either one of two possible effects: a 40% increase in damage output, or they'll heal for 40 life points upon hitting an enemy. What's important here is that the dice will be rolled at the start of the planning phase, meaning you'll know what bonus effect the Hand of Justice provides once the combat ensues. This will allow you to strategically position your champion accordingly.

The effect of the Arcane Gauntlet is simple, but has the potential of single handedly swinging a round in your favor: Your abilities get a chance to deliver a critical strike. Although specific odds aren't provided, it's not hard to imagine which units this is powerful on. Ahri, Aurelion Sol, or would anyone like an even more powerful Karthus?

Made from: Sparring Gloves + Negatron Cloak

Quicksilver turns the champion it's given to into Neo from The Matrix: it allows for the next crowd-controlling ability to be dodged by its wearer. This is not a one time effect either, but will reset every 5 seconds in combat. It's a very defensive mechanism perfect for champions who do have powerful ultimate, but who take a while to charge those abilities.

Made from: Sparring Gloves + Chain Vest

Staying true to the effect other freezing items have in Teamfight Tactics (we're looking at you, Frozen Heart), the Iceborne Gauntlet reduces the attack speed of enemies. Once the champion wearing the item dodges an attack a zone is created, lowering enemies' attack speed by 30%.

Made from: Sparring Gloves + Giant's Belt

The Backhand provides an effect which can be used in multiple interesting strategies. Its effect grants the wearer a spell shield, rendering them immune to the first incoming damage. Once the shield is broken, the champion that dealt the final blow to the shield is stunned for a long time. Giving your frontliner a Backhand can take out your opponent's damage dealer for a siginificant amount of time. But it's not necessarily bad on your units standing in the back either: it gives them a defense mechanism against assassins and Blitzcrank.

Made from: Sparring Gloves + Recurve Bow

In an odd way, the Repeating Crossbow hopes your champions die. Well, at least the ones wearing it. Aside from the attack speed, dodge chance and chance to hit a critical strike that Repeating Crossbow wearers get from the item components it's made from, the crossbow has a neat feature: when the champion using it dies, it tosses the bow over to another ally. Said ally then gets an additional 20% dodge and 20% critical strike chance. And that's not a one time bonus either—the effect stacks infinitely per round as units wearing it die.

Made from: Sparring Gloves + Golden Spatula

As has become the norm for Spatula-related items, combining the Sparring Gloves with one turns champions into an additional class or synergy. With Mittens, you turn into a Yordle. A unique feat of the Mittens is that it not only changes which synergies the champion owning them can trigger. It also grants another 10% dodge and critical strike chance, on top of the bonus Sparring Gloves already bring with them.

If you've been paying close attention, you'll have noticed that one crafting recipe is missing: that of Sparring Gloves + B.F. Sword. That's because they're part of an item switchup Riot is experimenting with.

Made from: Sparring Gloves + B.F. Sword

That's right, you'll need different items to assemble an Infinity Edge once patch 9.18 leaves the PBE. The effect will remain the same, however.

So what takes its place? Well:

Like the Thief's Gloves, a champion can't wear Lord's Edge in combination with any other item. But fear not, Lord's Edge can get out of hand quickly. Upon taking an enemy champion down, the unit wearing Lord's Edge is granted a B.F. Sword for the remainder of that combat phase. It doesn't stop there: this goes on as long as the champion keeps taking down enemies. In the most ridiculous case you could, in theory end up with 3 Lord's Edges by the end of the round.

Sword of the Divine is removed completely. The crafting recipe it used has now been given to:

Made from: B.F. Sword + Recurve Bow

Last Whisper targets tanky units... and Yordles. It deals true damage to enemies, equal to 5% the maximum health of the targeted opponent. If you think you can easily maneuver your way around Last Whisper by building dodge percentage you're wrong: attacks by a Last Whisper-wearing champion cannot be dodged.

Neeko offers her help, but not by fighting

The last item added on the PBE and set to join Teamfight Tactics with patch 9.18 is called "Neeko's Help". It's the first consumable added to the game mode and spawns a level 1 version of any champion it's given to. This is the perfect tool to help players create higher levels of champions without the need to spend gold. If Neeko's Help is given to a champion but there's no space on the bench for the level 1 copy, Neeko's Help won't trigger and will jump back to the item inventory.