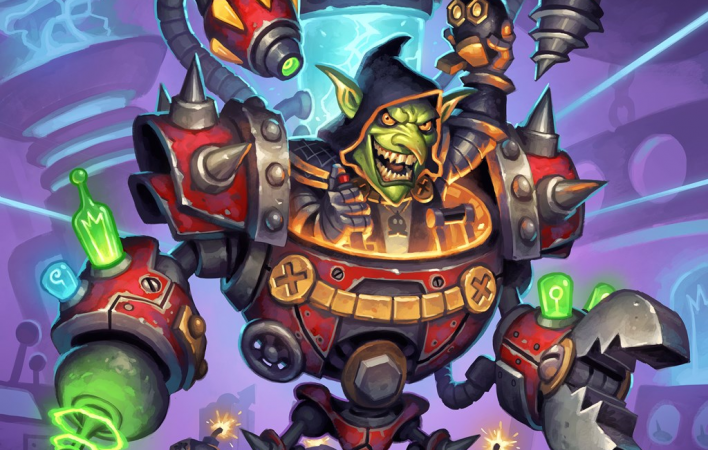 After the Hearthstone community begged and pleaded, Blizzard is finally implementing nerfs with Mage and Warrior as the main targets. The two classes have had the meta in an iron grip since April this year. By targeting those two classes the meta should be stirred again, and hopefully give way for more classes to see play.

Let's take a look at the nerfs Blizzard is implementing coming Monday, on August 26th.

Conjurer's Calling: Cost from 3 to 4 mana 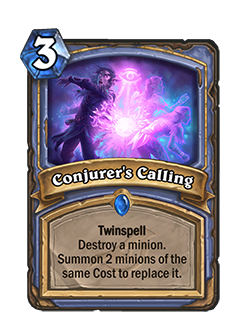 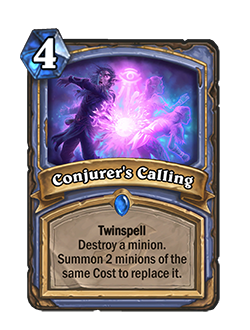 Mage's main strategy revolved around Conjurer's Calling targeting high-cost minions to generate immensely powerful boards in quick fashion. The exact list that was seen as the most powerful has changed quite a bit over the weeks, but two cards were always there: Conjurer's Calling and Mountain Giant. This synergy generated insurmountable board states, as only two 12-cost minions exist in Standard: Mountain Giant and Grave Horror, a 7/8 minion with Taunt.

By increasing the cost of Conjurer's Calling, more aggressive strategies should have more time to set up counter-boards before Mages pop off and summon a wall of leviathans. The developers add an important note: both copies of the Twinspell card will see their cost increased. 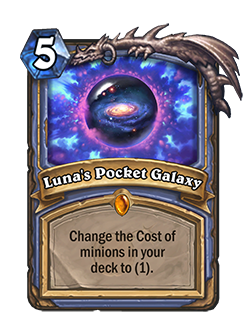 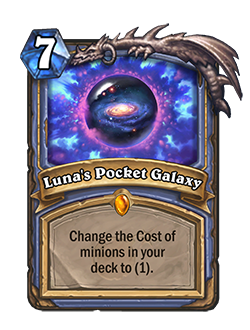 Luna's Pocket Galaxy actually received a massive buff earlier this year. During the Rise of the Mechs event 18 Boomsday Project cards were increased in power level. For Luna's Pocket Galaxy this meant a cost reduction: From 7 mana down to only 5, as we know it today. But the developers acknowledge their mistake: "Buffing cards during the Rise of the Mech event was a big change in philosophy for us. While we are happy with the overall outcome of the changes, has proven to be an exception."

After the cost of Luna's Pocket Galaxy was reduced, it quickly found its way in the aforementioned Conjurer's Calling lists. It turns out that playing a 1-cost Alexstrasza or Archmage Antonidas is pretty good. It'll be interesting to see if the legendary spell will disappear completely from Mage lists now, or if it'll still see play now that players have tasted its power. 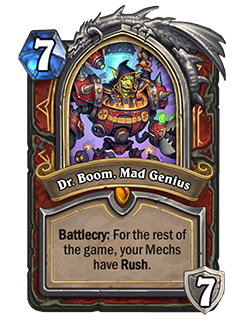 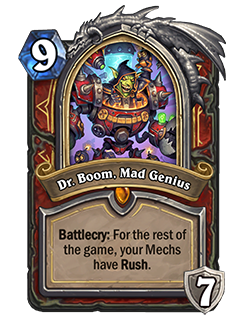 While many would argue that Mage has been the best class as of late, there is no card as universally disliked as Dr. Boom, Mad Genius is at the moment. The hero card is so powerful that it single-handedly turns around games with its instant 7 armor, roulette-style hero power and its permanent buff to summoned Mechs. It's the ultimate card for control over the game, and many will be glad to see it's being nerfed.

The cost increase should not be underestimated. Yes, in Control Warrior mirrors the cost increase is probably not going to matter a whole lot. But those set aside, costing 9 mana is a pretty huge deal. As the developers state: "Increasing the mana cost to 9 should make it more difficult to find a good turn to play Dr. Boom, giving opponents time to make powerful plays as well." In the best case scenario the player who plays Dr. Boom, Mad Genius will only have 1 mana left to spend to... summon an Eternium Rover, maybe? 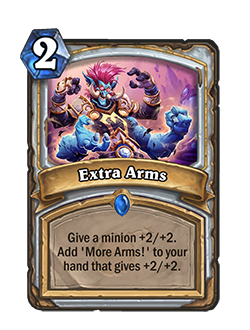 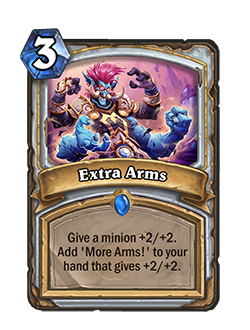 The final nerf to cards in Standard strikes as proactive rather than reactive. Another card that initially was buffed during the Rise of the Mechs event, Extra Arms fit in Priest decks that arose after the latest expansion, Saviors of Uldum. "With the release of Saviors of Uldum, Priest has access to many more powerful early game minionsand has seen a large jump in popularity and winrate. Between all of Priests’ buff spells and heal effects, it can be hard to fight for the board against them early in the game."

The Divine Spirit and Inner Fire combo decks received powerful support in Saviors of Uldum with Psychopump and High Priest Amet, sending the class to at least the top of tier 2 decks, if not into the tier 1 slot. With its main competitors being nerfed the danger of Priest going uncontested did exist, hence a slight tweak to the class.

Some love for Wild: Barnes up to 5 mana 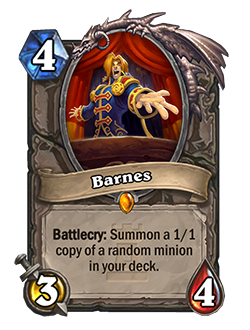 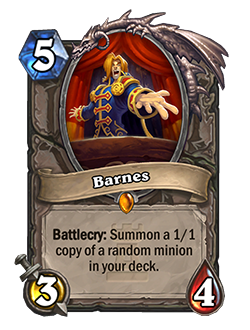 Some readers might not even recognize Barnes—the card is over three years old now. But this musical menace left a bad taste in Standard during the time it was around, and continued to do so in Wild. The recipe is simple. You play Barnes as Priest. It summons a 1/1 copy of, for example, Ragnaros. Your opponent kills the 1/1, but then you resurrect an endless stream of 8/8 Ragnaroses for as little as 2 mana.

After literal years of complaining, Wild players finally see the card addressed. Given the overal power level in Wild a cost increase to 5 mana might be even more significant than a similar change would be in Standard, as there are more alternatives to choose from.