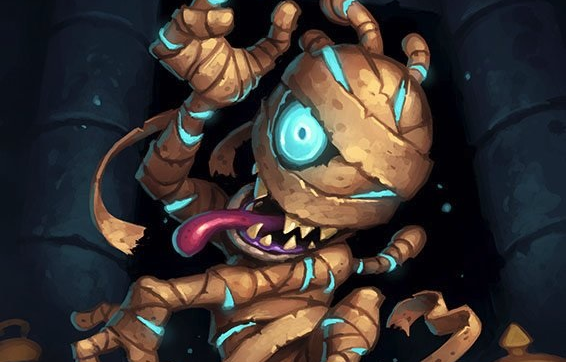 On August 6th the Hearthstone meta will be shaken up again. After a rollercoaster ride following the Rise of Shadows expansion which included nerfs, buffs and all kinds of other events the most fun part about card games is upon us once more: a new expansion. Saviors of Uldum calls in the beloved League of Explorers' help to defeat the villains introduced a couple of months ago, and over 130 new cards accompany them.

But with so many new cards, some with unprecedented effects, what should you play? We've called in the help of three players competing in Hearthstone's Grandmasters league to help you out: Jon "Orange" Westberg, Lucas "Rase" Guerra and Pathra Cadness have shared the lists they will testing as soon as the new cards hit the server.

Let's check the lists out!

Talking about shaking up the meta: if this list by Orange does indeed end up seeing play, that would be a wild shift for the Hunter class. Even in the previous era of Highlander decks, Rexxar and his animal companions stayed true to their nature. But that time may have come to an end, according to the Swede: "This is a first, rough sketch of where I want to start out with Highlander Hunter. While Brann might not look like the flashiest payoff, I think that Hunter might be the class that suffers the least from building Highlander-style since the class card quality is really high to begin with."

But if the class card quality is that high, why not run the new card "Hunter's Pack" which gives you a class secret, weapon and beast? "I'm just not convinced the card is very good. The range of both secrets and beasts is very wide and it is quite easy to lowroll both. Additionally, none of the weapons really excite me. Just looks like to much of a tempo loss in my book."

"You're running a small deathrattle/mech package and Zul'jin as winconditions. Subject 9, secrets and super efficent removal spells makes sure you cycle through your deck quickly and don't die." Of course, the deck also utilizes the brand new Highlander card Zephrys the Great: "If your opponent ever overextends the board you can always just go Unleash the Hounds into Zephrys and discover Bloodlust for lethal."

Rase re-evaluates a deck that has been around since the earliest days of Hearthstone: Zoolock. While the Warlock's specific list has changes a lot over the years the idea has remained the same: fill the board with small minions, buff them, and win. "Zoo is always 'fine', and has potential," Rase says, "Murmy, the new 1-drop, has a better synergy with the deck than Argent Squire had."

The most important addition to the list, however, are the new cards that synergize with Warlock's ability to inflict damage upon itself: Diseased Vulture and Neferset Thrasher. "I think it can be pretty powerful. You also have some other options to deal self damage, like Crystallizer, Flame Imp, Life Tap..."

Warlock also received more cards that work well with Lackeys, but not all of them fit well in this strategy, according to the Brazillian: "I don't think you can fit it all together. Maybe another version with Evil Cable Rat and Evil Recruiter, but I'm not sure if they are that powerful. You don't have that many Lackey generators."

In her enthusiasm, Pathra submitted not one but two lists. The first one doesn't have that many Saviors of Uldum cards: exactly 1. Once on board High Priest Amet sets newly played friendly minions' health to the same amount of health Amet himself has (Amet has 7 health). It's this powerful effect that is key in Pathra's OTK Priest, which is based off Nomi Priest lists: "Amet + Power Word: Shield, 2 Divine Spirits, play Stonetusk Boar and then Topsy Turvy the Boar and go face for 36 damage."

It sounds easy enough, but Pathra acknowledges that it's a tricky list. "Sometimes pulling off the combo can be tricky because we need to use the spells in order to draw more. Saving one Topsy Turvy is necessary to pull the OTK combo with Boar. If the opponent has a minion with taunt in the way, then holding onto one Silence would also be nice but quite difficult. It depends how many taunts there are in the meta. However, currently in this meta its mainly only Zilliax as the taunt. Against Mage you may encounter a few more."

The second deck she submitted is a Quest Rogue, Burgle style. The Quest, completed once 4 non-Rogue cards have been added to your hand by effects like Blink Fox's or Pilfer's, rewards players with a hero power that equips a 3/2 weapon which provides immunity when attacking. But completing the Quest shouldn't be that hard: "I think the original Rogue list of the current meta already kind of does that, with 2 Blink Foxes + 2 Hench Clan Burglars. (...) With this new list you can run 2 Pharaoh Cats and a Pilfer to help get a couple more."

An odd addition in the list might be Siamat, but Pathra strongly feels the card may be the surprise of the entire Saviors of Uldum set: "I think that Siamat is the new Zilliax of this expansion, and will be auto-included in most decks."

Which of these decks will you pay on August 6th? Let us know in the comments below!

FLY PowerOfEvil on Game 2: "There was no reason to chrono-break, it was a fairly handled situation."