Developed by Skeinglobe for LINE Games, First Summoner declares a departure from auto battles with pride. When it comes to mobile games, a lot of them claim to be about tactics and strategy but any fan of the platform knows this often results in grindy gameplay that is less about decision making and more about watching pretty battles unfold.

First Summoner is changing things up. The game is built around manual controls and mechanics and calls upon the player to strategically summon different monsters in order to combat hordes of enemies. The monsters you summon are represented by cards and every enemy you defeat grants resources that allow you to craft more cards, bolstering your legion of monster allies.

Like most card games, the most important part of playing well is balancing your deck with monsters and spells. Spells play an important role and are manually cast by the player -- they do all sorts of things like slow down enemies in an area or deal huge burst of damage, so casting them at the right time is key.

- The whole game plays vertically, no need to hold your phone horizontally to play it. Nice addition. UI is responsive and the aesthetic is what you would expect from a Korean RPG.

- However, the dark aesthetic is unique and makes recruiting monsters feel satisfying in an evil way.

- Simply drag your finger on the screen to make a path for your character to move.

- Players tap on enemies to target them and tap on interactable items and chests on the map to use them.

- While the player character does some damage on their own, most of the damage dealt will be coming from summoned monsters and spells, so crafting the right team is essential.

- Each unit has its own mana cost (from 1-20), creating a resource management aspect to the game. The player starts each encounter with a set amount of mana and must decide how they want to spend it to summon units

- Each unit has its own unique abilities and attack styles; melee and ranged units plus healers, specialists, and other creatures that work towards synergizing your team

- First Summoner has a nice feedback loop and there's plenty of incentive to go back to previous levels, complete trials, and try out new decks to find your preferred play style.

- There so many ways to craft a deck and build a team that creative players will enjoy finding new ways to utilize seemingly weak monsters that other players may miss.

- In addition, the ability to ramp up the difficulty in Endless Chaos mode is about as endless as it sounds. A great way to test new teams and rewards mastery of the game.

First Summoner has the tropes of many RPG games. There are sidequests and achievements that net you additional spending resources, primary missions to obtain gold, and plenty of items and upgrades available to strengthen any aspect of your character. To best describe the game, it is a little like if Hearthstone mixed together with a classic action RPG and an Auto Chess game.

However, the games dark aesthetic style and dedication to vertical gameplay are the most unique factors that will win over players interested in mobile RPG gaming.  All manner of demons, zombies, undead, and otherwise morbid looking creatures fill the game world and players both defeat and recruit them along their journey.

And, thankfully, that journey can be completed while holding your phone completely vertical. It is easier to hold your phone and at times you can even play the game with one hand -- an appreciated detail that results in more convenient playing on the go or in transit. It sounds like a small detail, but the many games are simply impossible to play unless both hands are free to hold the phone horizontally, causing a lot of downtime and reducing the mobile convenience the genre provides.

The game works perfectly with the vertical interface; you can tell the developers built the game around this interface as opposed to just being an afterthought. 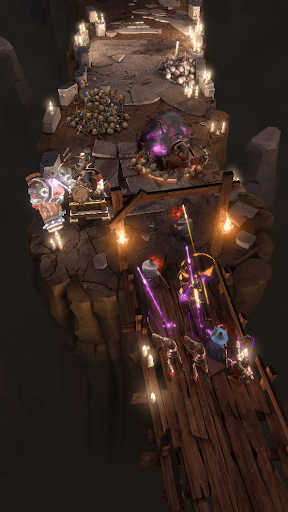 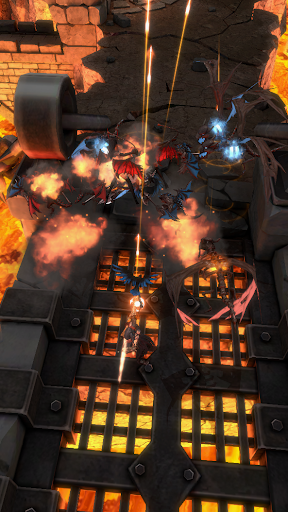 Leveling up your core characters is challenge-based and, as you move through the story, you can "awaken" your character by completing trials. These trials put you up against a shadow version of yourself and, if you can win, your playable character gets a boost to their stats and a new costume. After you have powered up your character (and dressed them to your liking) you can even engage with other players in PvP combat.

This game is easy to learn but hard to master. Challenge modes like "infinite Chaos" ramp the difficulty of the game to the very maximum, so don't even try to enter this mode unless you have spent significant time creating a team and building a strategy that can defeat perseverant enemies.

First Summoner has been going through a closed Beta test since February 25th, 2019 that ended on  March 4th of the same year. So far the game has received positive acclaim from South Korean users, which is to be expected considering the popularity of the mobile RPG genre in the East.

It's international release on July 18th, 2019 across 140 countries simultaneously around the world is ambitious, but the team at Skeinglobe are confident that unique design choices like manual controls and vertical gameplay will be enough to entice users new to the mobile RPG genre.

Inven Global will be covering the release of First Summoner, providing strategy guides, tips, and all sorts of other insights to help players dive into the unique mobile RPG.