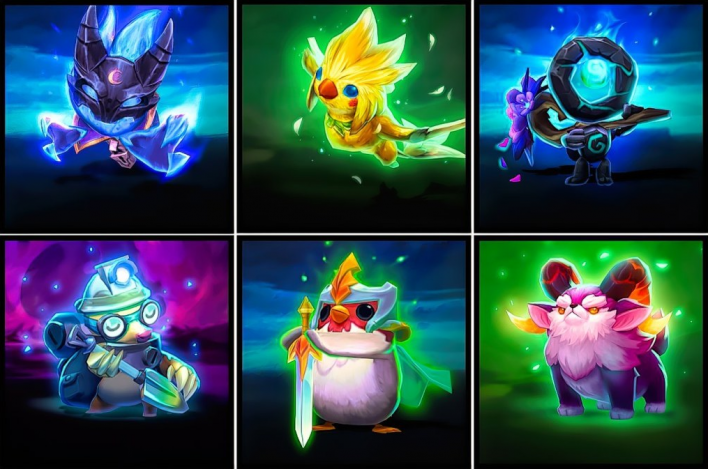 Teamfight Tactics is hot. The new game mode in League of Legends, based on the immensely popular Dota 2 mod Auto Chess, has only just hit the Public Beta Environment servers, but already sits at the top of Twitch's broadcasted games. Although in very early beta thus subject to changes, one thing that's been a hit is sure to stay: the Little Legends.

What are Little Legends?

If you're unfamiliar with Dota Auto Chess, you may scratch your head when seeing the Little Legends. The cute critters actually represent you during a game of Teamfight Tactics: you control them, can emote with them and, in Teamfight Tactics' carousel rounds, they pick up a champion for you. There's also a sadder side to them though: they tank the damage in rounds you lose against opponents.

How do you get them?

There are six types of Little Legends currently available in the PBE. By playing games you can obtain one "Little Legend egg" for free, and then choose one Little Legend out of the three presented options. From there on, the only way to obtain more eggs (currently) is by buying them with Riot Points.  You can see all prices in the table below:

Little Legends come in three rarity tiers. With each tier they level, their appearance is upgraded to look fancier with more props and sprites. Your Little Legend is levelled up after you obtain it multiple times from the random Little Legend eggs. Thankfully, once your Little Legend has reached the third tier, you won't be able to receive another copy through random eggs again.

So, which Little Legends are there?

As said earlier, there are six types of Little Legends at the moment. However, each type has six uniquely themed skins. Combine that with the three tiers each skin can have and you find that there are 108 different ways to customize your Little Legend experience.

The six Little Legends are called Featherknight, Furyhorn, Hauntling, Molediver, Silverwing and Runespirit. Below you can view all of their skins across the three tiers.