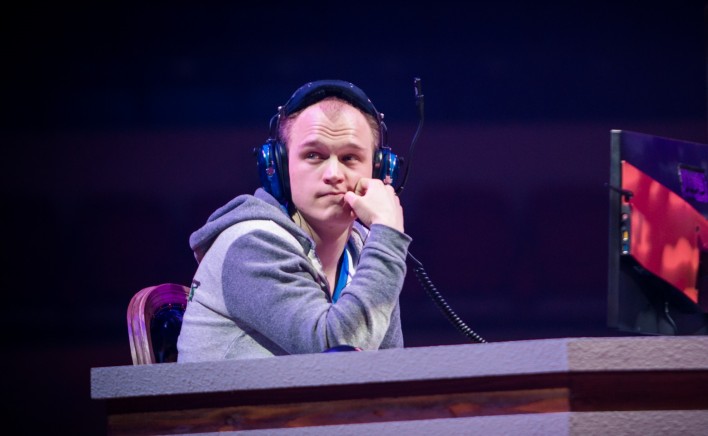 The Hearthstone World Championships are in full swing. Yesterday, fan favorite Raphael "Bunnyhoppor" Peltzer already made it out of his groups in a 2-0 sweep, securing his ticket to the top 8. One step closer to the coveted title of Hearthstone World Champion, he sat down with our on-site reported Nick D'Orazio to look back at his preparation for the tournament, and reflected on his performance so far.

After Rise of Shadows came out, you only had 8 days to complete your lineup for this tournament. Could you walk us through that process?

It was completely insane. The first three days I just played stuff which I wanted to play on ladder. Then I asked some friend who are specialized in certain classes what they had been testing. I also looked on Twitter, because people just post their decklists there. Decks also pop up on HSreplay.net. Then you just test everything you think could be good, you talk with friends and friends' friends trying to get as many decks that are at least viable. That's when you start testing in practice groups.

I don't think [Blizzard] has ever done anything like this before. We got the full Standard rotation, half of the old archetypes were eliminated because Genn and Baku rotated to the Hall of Fame... Usually when Standard rotation happens you discard half of all the old decks, but this time all of them were gone. The Quests, Death Knights, every powerhouse card were gone.

Are you in favor of that much of a shake-up?

It makes some sense, but the eight days that we had to prepare was just not enough. I think we should have been given an extra week. We went on a 16-hour schedule of playing Hearthstone. It was playing Hearthstone, then catch some sleep. That's just not healthy for anybody. So for the physical aspect, I don't think that was great.

During the deckbuilding process, were you trying to shield off any secret decks you had found?

I played some decks on ladder, but when I queued against a big streamer I just conceded immediately. Not because I wanted to conceal information - I just thought "whatever". Everybody has their own practice groups, and you trust the people in it not to tell other people that are preparing for Worlds what you have in store. So it wasn't really an issue.

In previous HCT tournaments you were successful by bringing more unusual decks in an established meta, like when you brought Big Spell Mage. Do you feel like you're at a disadvantage now that you can't leverage that skill?

I don't think I've ever brought a deck that was too crazy. I've made some meta reads that worked out. I brought Big Spell Mage because the meta read was: people are going to bring Taunt Druid. Big Spell Mage destroys that stuff. Then everybody brought Evenlock as well, and that just made it better. It lined up perfectly against the field. In my eyes that's not super wack, that's just a good read.

Blizzard is dropping the Conquest format, and will switch to Specialist going forward. Will you miss Conquest?

Probably. There will be points in Specialist where we are all going to hate the format and say: "This sucks, I wish I had Conquest back." Then again, there's also going to be times where you hate Conquest. When you're preparing and find three decks that work well together, but you can't find a fourth to make a good full lineup, that is when you hate Conquest. I've never been a hater of Conquest though, honestly.

I haven't played much Specialist either. I played it a little bit and it worked quite well for me, but now there's a different meta and I haven't tried it at all. So I can't honestly give you a statement on what I think about Specialist in this meta.

I thought: "what the fuck dude, missing lethal in Worlds, nice."

Let's talk a bit about your World Championships performances so far, and of course I have to ask you about the missed lethal. How quickly did you realize that?

I think you saw from my demeanor that I realized it immediately. I thought: "what the fuck dude, missing lethal in Worlds, nice." [Chuckles]

How do you recover from that?

You win the game. That's the thing: that specific game was so incredibly won for me, that I didn't have to think about it too much anymore. I feel like you're way more likely to miss lethal in spots when you've technically already won the game. You just sling your cards and you don't think about everything anymore. Your mind just switches off a little bit.

Of the decks that you've been playing, which one do you feel most confident about?

I mean, that answer has to be Hunter. It's still Midrange Hunter. Over the last three months, six months or maybe even a year, I've played a few thousand games of that deck. I think it's realistic to say that I haven't gotten in a thousand games of any post-expansion deck yet. Midrange Hunter plays a bit differently now, but the playstyle, mulligans etc. is still very similar.

Alright now looking forward to the top 8: purely based on decks, who would you like to face off against?

I haven't practiced enough yet to be able to tell you that. Today and tomorrow I'll practice, so I can't really answer that.

No problem. Based not on decks then, do you have any players you really want to defeat?

I respect everybody in the tournament, but there are a couple of players who I think are just 'up there'. Justsaiyan, muzzy, hunterace and XiaoT. I see Justsaiyan and muzzy prove themselves over and over again on ladder, in tournaments... They've always been big names as far as I can recall. Hunterace had a great performance this year, as well as XiaoT, so that's why I want to face those players.

Is there anything you want to say to the people who chose you as their champion?

I think I've given them three packs now. I don't know how many you can get now, whether it's different from the other championships, but I'm pretty happy that I got people packs again. Thanks to everyone for believing in me and cheering me on. I appreciate that a lot. The positive feedback that I get on Twitter, after the games, does really make me happy. I'm happy that I get to deliver, so far.