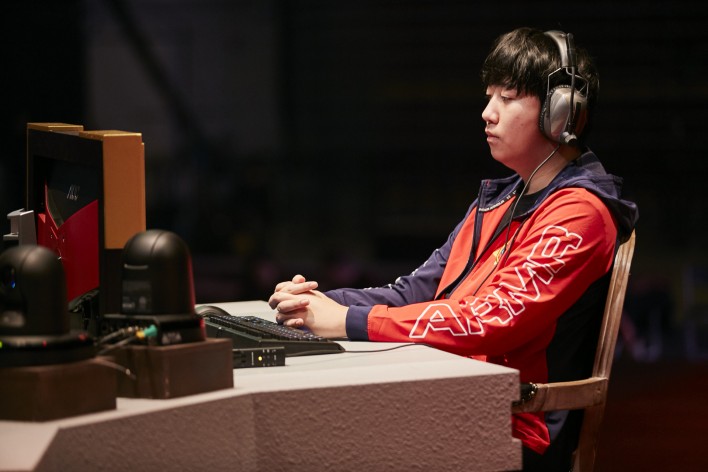 With over 12 million inhabitants, Xi’an is one of the most populous cities in Western China. The megacity has a rich history. The famous Silk Road began in Xi’an, providing continents with new tradeware across the ages. Buried deep inside tombs, Xi’an kept emperor Qin Shi Huang’s Terracotta Army safe, granting the statesman an army for conquests in the afterlife. Where skyscrapers meet ancient shrines, the newest stores mix with tasteful street food, that is where Xi’an hits a sweet spot.

And to Wu “XiaoT” Juwei, China's most respected Hearthstone player at the moment, Xi’an means home.

Son to a high school teacher and a railway worker, XiaoT grew up in a loving family with supportive parents. “In high school, they supported me to learn for math competitions, meaning I had a lot of time to prepare. People usually think university exams are the most important thing. But my parents gave me so much support, that I had many opportunities to learn outside of school.” It’s not a huge surprise that someone this good at Hearthstone has an affinity for numbers. It’s always been that way. “I’m good at mathematics, chemistry and physics. I like sinking into the puzzles, and enjoy the moment when I finally figure them out.”  Writing and studying the Chinese language, however, is a struggle for him.

More of a curveball in XiaoT’s youth is the love for something that seems completely unrelated to his ascension in Hearthstone esports: basketball. A young XiaoT could often be found on the courts of Xi’an.
“It was just a hobby, but it’s the favorite memory of my childhood: playing basketball together with many friends. It started at around the age of 10.”

However unrelated it may appear, it was basketball that paved the way towards XiaoT’s digital successes. The very first video game he fell in love with was an adaptation of the sport he so often played with his friends. In FreeStyle - Street Basketball, a comic-style online multiplayer game, XiaoT paraded his basketball insights to people all across the world. From there, he tried various titles. But the best memory he has of exploring the digital universe links back to his parents once more: “I enjoyed the moments playing Monopoly on pc with my parents when I was a little kid.”

Pull up a chair by the hearth

The love XiaoT had found for games combined with his love for maths and solving puzzles in card games. After having played Yu-Gi-Oh! for a while, XiaoT’s friends introduced him to the first card game he had ever seen on the computer: Hearthstone. It was his first introduction to the exceptional production quality of Blizzard games too: “I love card games, so I thought it was really cool.”  Over time, XiaoT came to love Hearthstone more than the friends who introduced him to it. That’s when, in 2017, he decided to visit a Hearthstone tournament to see what all this esports fuzz was about.

It may be the most impactful tournament he never played in.

In Shanghai, some of the greatest names Hearthstone has ever known gathered to compete in the 2017 Spring Championships for a coveted ticket to the World Championships. Hoej, Rdu, muzzy, JasonZhou, Kranich… the roster of competitors ranks among the most prestigious any seasonal championships in the history of Hearthstone.

There, in the audience, XiaoT made up is mind. “I thought about how much I loved this game, and how cool it would be to play in tournaments like this one. I wanted to play in HCT, against players this good.”

Setting out for the stars

Whereas it would take most aspiring Hearthstone pros at least a year, if not several, to get a shot at global recognition, XiaoT defied normal convention. He participated in some smaller tournaments, learning how to build lineups by watching others play, but it was through grinding on ladder that he accumulated enough points for his first ever Playoffs.

Which Playoffs? The 2017 Fall Playoffs, half a year after he decided to go pro.

It didn’t take much longer for the whispers of a new Chinese Hearthstone king to reach Western ears either. In May 2018, XiaoT was invited to one of China’s most prestigious LAN tournaments, the Titanar Elite Invitational. To XiaoT, this felt like his true breakthrough: “It was my first time playing against Western players in a tournament. I was excited because they were these ‘big names’. But I didn’t quite know how to communicate with them.” If there were any nerves at all, they didn’t hinder him. He defeated XHope, OmegaZero and Pavel, leaving two players that had inspired him to compete at the 2017 Spring Championships - Rdu and Mage - behind him. Swedish powerhouse Orange awaited in the Titanar finals. It didn’t go in XiaoT’s favor, but he had won the respect of many in the scene.

For XiaoT’s parents, his ascension came as somewhat of a surprise. Not because they didn’t believe in their son’s abilities, mind you - they simply didn’t know the extent to which his success went. It thus was a very pleasant surprise when they learned that their son had not only risen to prominence but was maintaining it as well. In under year after he was inspired to compete, XiaoT managed to qualify for yet another Playoffs, and this time for its corresponding Championships too: the 2018 Summer Championships, in Los Angeles. “My parents were surprised and proud of me. My friends, they thought I was a master.”

The start of the Summer Championships looked promising. XiaoT dominantly defeated Tansoku and Viper in the group stage, granting him a pass to the single-elimination top 8. However, just 1 win shy of securing a ticket to the World Championships then and there, XiaoT was stopped in his tracks by his Polish opponent A83650. “I felt upset at first, but I know I had a long way to go to still qualify for the World Championships. My parents and friends supported me a lot, so after the Summer Championships, I went back to playing. I was determined to get back.”

Although he didn’t manage to qualify for another seasonal championship, the rest of XiaoT’s year kept confirming his strength. In October’s China vs. Europe tournament he grabbed yet another silver medal. When XiaoT was invited to the Taiwan Inn-vitational, he felt proud for being acknowledged by Blizzard. At the end of it all, he received the notification that he would officially represent China at the World Championships. It was a dream come true. “I was in the lead with points for a long time, and I always desired to win the Last Call.” Once more, he could rely on encouraging words of the ones close to him: “They all thought it’s what I deserved.”

In a few days, XiaoT will walk up the largest stage there is in competitive Hearthstone, in under two years after deciding to become a pro player. With his girlfriend by his side, and his family and friends watching from home, he hopes to become the first World Champion from China. In a short amount of time, XiaoT has gone from being inspired to being the inspirer. And his story is far from over.