It looks like Hearthstone's next expansion will be about some kind of... suicide squad 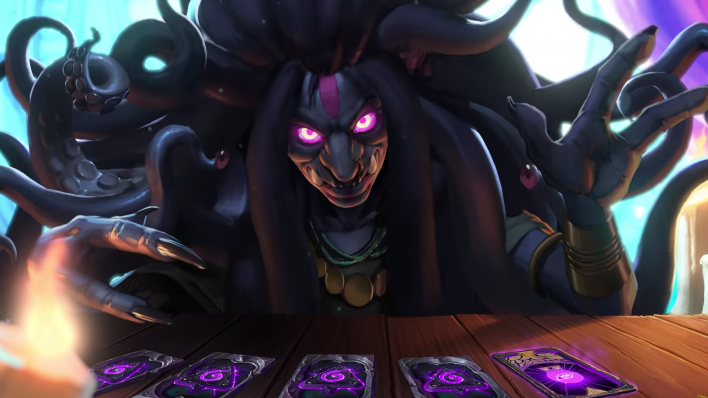 If you're a fan of antagonists, you're probably in for a treat with Hearthstone's first expansion of 2019. While it's only been a handful of teasers that the community is basing its assumptions on, it seems to tie together slowly but surely.

The first teaser re-introduced the Fortune Teller, who guided players to the announcement of Whispers of the Old Gods three years ago. This time she foretold the return of "the masters of plotting and scheming", casually mentioning she'd be part of them too (what a plug).


Today, she continued to flip over her shiny cards, now adding Kobolds and Catacombs' very own King Togwaggle to the roster of mean fighting machines.

With two of the five enemies revealed, one can only wonder which villain will join Blizzard's rendition of Suicide Squad next, as popular streamer Disguised Toast titled it in his deduction video.
In said video, he explains how the expansion could center around be some kind of attack on or around a prison-escape- theme. If it turns out to be such a prison escape, maybe Illidan can receive an alternative card, but this time as a decent card? One can only dream.

The third team member seems to be all but confirmed. In the latest teaser a dark skull-totem is displayed, which Redditors quickly linked to Magatha Grimtotem. She'd fit right in with the other psycho's, given that the shaman killed a beloved leader when she couldn't claim the throne through the Tauren's well-established democracy.