The Best Overwatch Contenders Match and Player of the Mid-Season.

We are already halfway into Season 2 of Overwatch Contenders, and it has been an amazing three weeks of constant battles in the world of Overwatch. However, one match and one player, in particular, have stood out from the rest.

Here are my picks for the best match and player of the mid-season.

From Pacific to Europe, there have been many interesting and exciting games in Season 2. Most of the teams in each region run similar compositions and strategies with the occasional unique variation. However, EU is completely different. It is a region that runs tank heavy compositions to great affect. The popularity might be explained by the dominance of a couple of teams that tend to excel in tank compositions ultimately forcing other teams to follow suit.

Nonetheless, EU is an entertaining region to watch and the battle between Team Gigantti and Eagle Gaming is a great example of that. Don’t be fooled by the 3 – 1 score. It was a close match throughout the whole series. Be on the lookout for their last map in Rialto where the last few fights are nail-bitingly close and intense.

You can check out the match here.

Our “Player of the Mid-Season” hails from the land of esports, South Korea. He is currently a flex player from GC Busan Wave (formerly known as Intro Wave or Fat Cat) that have changed their team name after being sponsored by the City of Busan, much like the original GC Busan.

GCB is a fantastic team. They cruised through Open Division, and to some extent Contenders Trials after failing to qualify for the Trials in Season 1.  They are a very entertaining team to watch that is willing to try risky compositions - like their old school Nano Genji composition on King’s Row against the Foxes - and still manage to secure wins in style. Everyone on the team is noteworthy. However, no one stands out as much as Edison. He has a very deep hero pool and has the potential to single-handedly carry his team.

Check out his highlights from his match against MVP Space:

Note: All times are in PST 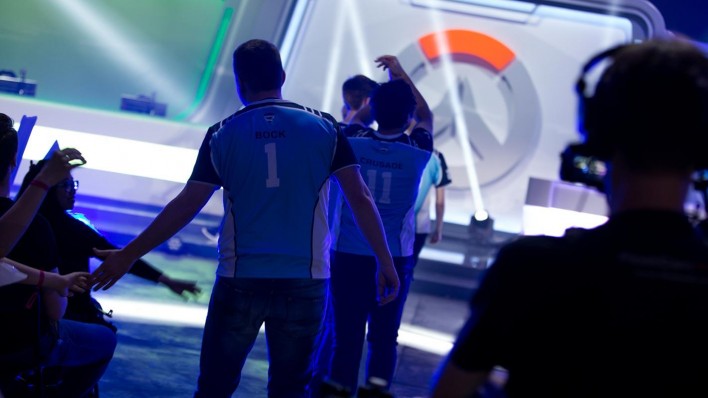 The British Hurricane is in peril. They have two matches left and they have yet to face their toughest opponents, Angry Titans. Not only do they have a match against Group A leaders, but they still have to face Orgless and Hungry, which at the moment seem like a stronger opponent than the Hurricane. They would have to shape up and catch up with the rest of the group in order to be on equal footing against these two teams, and even then, they would have to hope that Young & Beautiful don’t perform as well.

Young & Beautiful also have two matches left. However, one of their matches are against one of the easiest teams in the group, Bazooka Puppies, and they should be able to beat them. Their match against 6nakes should be pretty even. If Young & Beautiful can perform equally well or even better than the Hurricane, then they should have no problems making it to the quarterfinals.

Last Night’s Leftovers’ surprising victory against the Gladiators Legion puts them at a great spot in making the quarterfinals. Their chances are dependent on how their direct competition, Mayhem Academy, fares compared to them. However, LNL has a slight edge. Mayhem Academy’s next match is against GGEA while LNL’s next match is against Second Wind. Currently, Second Wind has not won a single match and their chances of beating LNL seems slim. On the other hand, GGEA is not a team that will go down easily.

After this, their remaining matches will be against each other. Last Night’s Leftovers will face off against Mayhem Academy on the 31st and the winner of this match should be the one that makes it into quarterfinals (assuming both teams beat their other matchups). This should be an epic and intense battle as both teams will have to play like their playoffs chances, literally, depend on it.

Here are some other amazing matches to come in Week 4 and Week 5: