4 traits enduring esports all have in common. 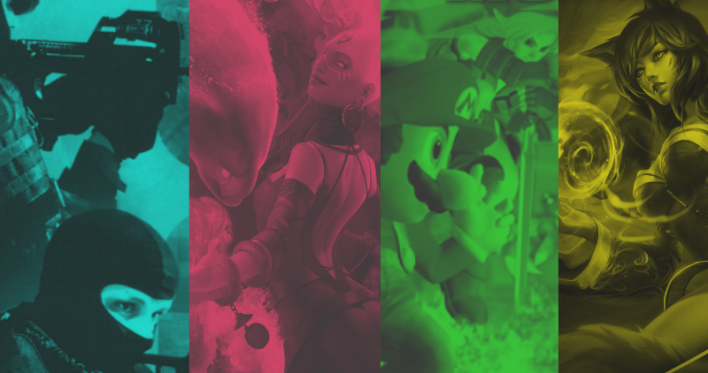 If someone knew how to ensure a video game would make for a thriving esport, they would  be the most in-demand individual in all of gaming.

I am not that person, but I love esports and have spent the majority of my life watching them, studying them, and playing them. I've seen a lot of esports come and go and, in recent years, the existence of an esports scene has become an indicator of a multiplayer game's quality and relevance.

As a result, everyone wants their game to be an esport and who can blame them? The stadium filled crowds, iconic players, highly bankable streamers and passionate communities all centered around one game or IP:  the allure must be impossible for game developers to resist.

Esports isn't for every game though. Remember when Infinite Crisis joined MLG as an official esport while the game was still in its closed beta? That may have been years ago, but the critical failure of recent trainwrecks like LawBreakers serve as a reminder that the rush to become an esport is still a very real trap to avoid falling into.

The most iconic esports of our time had the luxury to grow patiently and authentically overtime while the mainstream video game industry ignored them completely.  In basements, arcades, bars, and convention centers all over the world, these esports communities learned everything there was to know about their game. The result were players, commentators, and tournament organizers that traveled the world like a circus -- each tournament becoming bigger and better.

Some had the help of their games developer (some did not) but the resulting love of game and fierce competition created a lot of amazing esports moments.

Number of tournaments (either sanctioned, sponsored, or with significant prize pool)

The games listed above are, in my opinion, the esports that either defined or (continue to define) the authentic "lighting in a bottle" aspect that every new esport is trying to recreate. While esports like Street Fighter shouldn't be ignored, their player base is urged to migrate to the newest game in the series every couple years and I think this ultimately hurts the games ability to dominate esports culture.

Street Fighter V, the newest game in the series, doesn't benefit from the legacy appeal of other esports that have been grinding the same game for decades. In other words, the Daigo Parry happened because of Street Fighter: Third Strike -- its magic and appeal stays with it and doesn't move on to Street Fighter V.


So how does a game become an enduring esport?

Sure, developers can throw millions of dollars at a game and players will flock to its competition for a chance at winning it, but consistent viewership and die-hard fans aren't so easily bought. Instead, the esports that manage to stay relevant way past their release date have these four things in common:


1. They allow incredible feats of skill to, sometimes, trump everything else.

This play from the CS:GO 2018 World Championship in Katowice is nothing short of miraculous. It doesn't matter whether you follow CS: GO religiously or are tuning in for the first time: moments like this are simply electrifying.

Professional gamers look the part when their game allows them to pull off things like this.

The reason feats like this are possible is that CS:GO is, at its core, a game that rewards skill and precision above everything else. Teamwork is important, strategy is important, keeping calm is important, but all of that doesn't matter if one player plays perfectly, capitalizing on every mistake their opponents make.

These moments don't need to be common, they just need to be possible. When they inevitably happen, these moments are immortalized, enticing new fans and players every time they are shared. They are the stories that keep fans watching, talking, and enamored with an esport.

An esport needs to have its 79-yard-hail-mary-touchdown-pass moments. If not, why are we watching?


2. They have a viewing experience that mirrors gameplay.

One of the most underrated aspects of Super Smash Brothers: Melee as an esport is how easy it is for even the most novice of fans to appreciate the skill of the games professional elite. A lot of this is because of how widespread the Smash series is in North America. Among NA gamers, finding someone who hasn't played a round of Smash Brothers is as difficult as finding a gamer who has never played Mario Kart.

When you watch competitive Smash Brothers, what you see is what you get. There aren't multiple camera angles or extra information added to a spectator view -- it's just the same screen and simple "stay on the stage" gameplay that Smash Brothers fans are intimately familiar with.

4:08 - an incredible read from Mango: "The rest heard round the world"

Unlike Melee, many esports struggle to catch all the action of their own game. Battle Royale games are currently trying to figure out how the simplicity of the genre isn't ruined by the complexity of observing its tournaments. Even the Overwatch League, who relies on an entire team of observers and live broadcast mixers, still struggle to present the most intuitive version of a 6 vs. 6 FPS.

The esports with a long shelf life don't have this problem or have developed sufficiently creative ways of solving it. Starcraft 2, for example, powers through this problem with veteran caster and observer synergy made possible only through years and years of itteration and improvements.


3. They feature tension and suspense followed by explosive action.

Dota 2 matches are notoriously long compared to other esports. Games on average take around 35-40 minutes,  but one tournament match in 2015 lasted over 3 hours.  Then there was the infamous ladder match between 10 normal players that took over 5 hours!

On paper, it seems highly unlikely that Dota 2 would thrive as an esport with such long matches, but what the numbers don't tell you is the palpable tension that exists within every minute of a professional Dota 2 game.  This tension creates suspense that eventually...

So satisfying, so Dota 2.

In Dota 2, death is the most punishing thing that can happen to a player. As a result, competitive play is deliberate and methodical, with each player moving around the battlefield as cautiously as possible. A cold war over map vision, creep score, and rune spawns wages until, suddenly, an explosive team fight erupts.

And, make no mistake, Dota 2 is a successful esport because of how incredible its team fights are. Their charismatic  casting talent revels in these moments, bringing a level of excitement few  esports are capable of emulating. When a team fight ends, calm is restored and the cycle of suspense begins again.

Esports that can find a similar rhythm have stumbled onto something special.


4. They make you better at the game just by watching.

Esports are entertainment, but they are also a vital tool for gamers who want to get better at the featured video game. It's not enough for a tournament organizer to just promise action and high-level play; an esport broadcast should also reveal high-level insights and tactics the average viewer isn't aware of.

If esports viewers can walk away from a broadcast with a greater understanding of the game (that then helps them win games of their own), you can bet they will tune in again to watch more.

Take notes, Faker is about to do something amazing.

Sharing a Faker clip is practically cheating in an article about esports, but the level of mastery on display in this 1 vs. 1 is too good not to share. Like Dota 2, LoL esports is jam-packed with data, providing players wanting to up their win percentage multiple ways to do so.

The aspiring Ekko player, regardless of their skill level, can learn something about the champ from this Faker clip. Imagine how much they can learn by watching an entire commentated match? Enduring esports become invaluable to their games player base when watching a tournament is the most effective way of learning more about the game.

Not every successful esport has all of these traits, but the ones that manage to have all four are poised for memorable tournaments and long lasting fans.