"Inside Valiant" is the latest in esports' misplaced, harmful pursuit of transparency 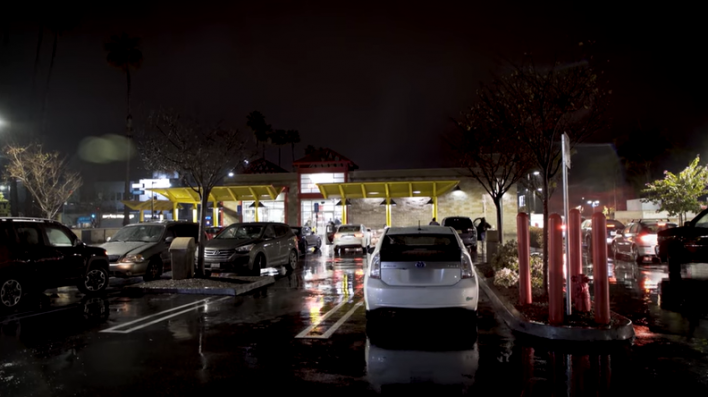 Pro gamers’ – and more specifically, pro Overwatch League players’ – lives are the subject of constant public spectacle, criticism, and adoration. Between streaming; personal and team Discords; casual social media usage; both Blizzard and independent media content; and, on-stage time, players live their lives within inches of their viewers. Death threats and fan-art, calls for their eviction from the League and promotion to the starting lineup, are at pro players’ fingertips 24 hours a day.


And yet, “Inside Valiant” manages to go a step further in stripping pro players of any semblance of privacy.


The episodic series on the Los Angeles Valiant’s YouTube channel watches like a classic reality show, more akin to MTV’s “Teen Mom” and E!’s “Keeping Up with the Kardashians” than the Dallas Fuel’s “On the Watch” or the Houston Outlaws’ “Focus.” Each 7-10 minute video opens with a brief update on the Valiant from its CEO Noah Whinston. Shots of the team practicing or watching matches from the dugout are interposed with clips of players sat in front of plain backdrops, their names and aliases scribbled across the screen as they lay bare the team’s intimate failures and frustrations for a faceless interviewer and, ultimately, thousands of viewers.

In episode two, it was coach Henry “Cuddles” Coxall who was voted out of the house. The next week, Brady “Agilities” Girardi, one of their projectile DPS players, became the villain as teammates, coaches, and CEOs blamed him for the team’s failures. In episode four, head coach Byung Chul “Moon” Moon is flown in by Whinston to save the day; Agilities is safe for another week.

Overwatch itself is notably absent from the series. “How can we improve our composition and strategies on King’s Row?” is not television material, but “who will win the right to the DPS position this week – Agilities, silkthread, or Kariv?” may very well be. 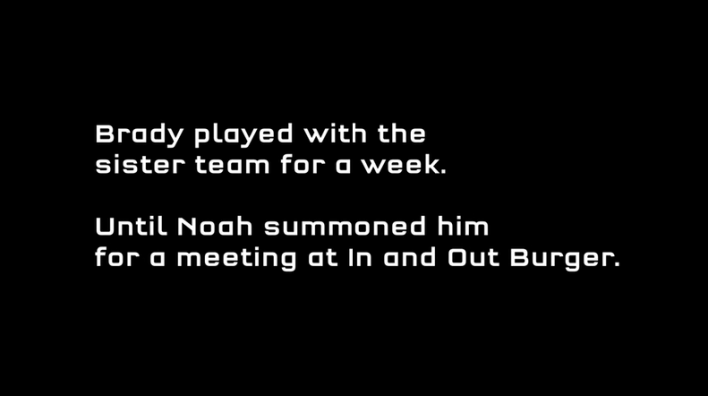 "Things aren’t all perfect in the Valiant,” the show seeks to tell us. “Our transparency with fans is a cut above the rest – and isn’t it great? Isn’t it brave? Cheer for our team; buy our merchandise; follow us through the Overwatch League,” the showrunners seem to say, “because we’ll show you the real stuff.”

Like any good reality show, the “real” stuff is overlaid with dramatization and intrigue. Agilties’ perceived failures at the beginning of Stage Two become a proper made-for-TV moment.

The setting? A car parked outside of an In N Out. The characters? Young, successful CEO Noah Whinston and his even younger employee, Agilities, who is desperate to prove himself and hold onto his dream of pro gaming. The stakes? Any further playtime in season one of the Overwatch League – “…you’re going to have a shot at the main roster again. But to be transparent with you, this is the shot,” Whinston tells him.

The desire to give fans such unprecedented levels of transparency extends from a rapidly antiquating idea that esports fans are entitled to know the inner-workings of organizations and the personal lives of pro players. Until recently, esports has enjoyed its status as a relatively tight-knit community, and Overwatch even more-so. As a result, pro players, coaches, and staff are accessible to their fans in a way that is inconceivable to any long-time sports fan. Interactions with one’s idols on streams, Twitter, Discord, or at an event are unbelievably common and easily acquired – but they cannot last.

Historically, pro gaming is not a career which has offered social and financial stability. Consequently, streaming and a strong, active social media presence have been (and in many ways still are) vital additives to a pro player’s resume and bank account. A popular pro player is a more attractive pro player to any organization, and that is why the smartest players have invested time into growing their personal brands via streams and social media. 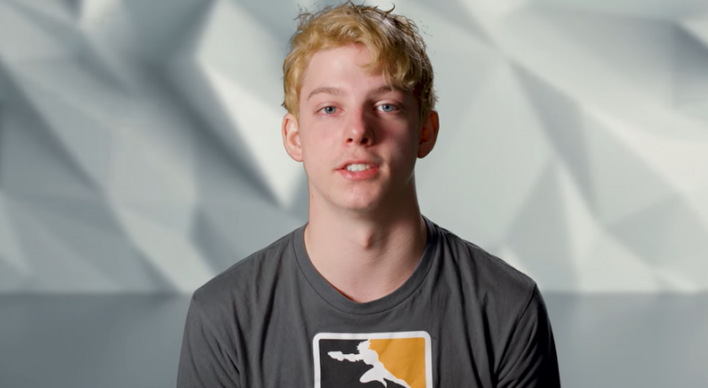 But now, esports is rapidly outgrowing the long-held expectation that pro players remain accessible to and transparent with fans. The recent establishment of pro esports leagues has and will continue to temper the necessity of pro players’ personal streams, which too often become fodder for conflict. As it stands, pro players are personal with and accessible to their fans in a way that is wholly unique to esports, and unparalleled in sports or even the film industry.

Soon, as audiences grow exponentially and the public becomes as hostile as it is adoring, pro players will find themselves retreating from social media as a means of self-preservation.

Valiant players are not unique in their complicated relationship with social media. Between the 2017 World Cup and the Overwatch League, Jake “JAKE” Lyon of the Houston Outlaws, for example, has experienced the best and the worst of the public’s attentions. On any given Monday he may be among the most popular players there are, but you can bet that by Thursday, the tide has turned and brought with it a deluge of hate mail.

Similar can be said for Dylan “aKm” Bignet of the Dallas Fuel. Once heralded as the solution to all of Fuel’s problems, he now faces his own backlash and is cracking under the pressure of a passionate, virulent fanbase. Public forums have become an outlet for the stress of the job, but only add fuel to the fire.

“We don't want to read hate messages on Twitter every day or that kind of thing,” aKm told InvenGlobal earlier this month. “We are human beings - who wants to experience that? Imagine dealing with that just because someone wanted to have fun or because their favorite team won or lost?”

Under the same organization, coach Kyle “KyKy” Souder has become one of the most vilified figures in the League, though he too was once a community favorite. Perhaps that is why, compared to most community figures, his social media usage remains limited. 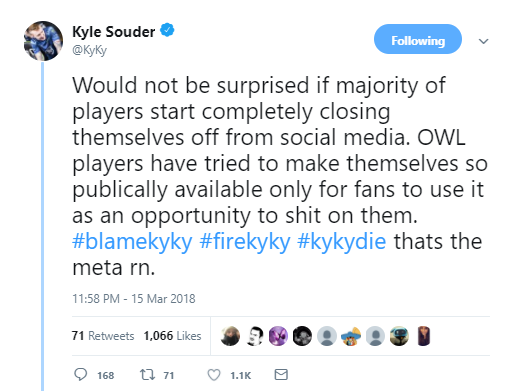 “I'm happy that the OWL offers transparency to fans, but taking those glimpses and concluding that you should browbeat teams/players/staff into accepting your vision of the game is at best delusional and at worst seriously harmful to the well-being [of] those who are being targeted,” wrote Jake on Twitter this month

“Inside Valiant” does not just offer glimpses into the team – it tears down the curtain between fans and players; exposes every piece of dirty laundry; and, encourages players to surrender to public consciousness any thoughts of envy or distrust of their teammates.

Then, the organization obligates (like so many others do) its players to stream, offering up yet another comment box for the masses to shout their opinions. After each episode goes live, Valiant players’ stream chats become inundated with questions and convictions from fans that they are made to endure.

Privacy, of course, is not a luxury pro players expect – life in the public eye is the cost of fame and a dream career. But the reality is that most Overwatch League players are kids who, despite whatever meager media training the League offered at the beginning of the season, are wholly unprepared for the onslaught they are currently experiencing. And in their stress, inexperience, and confusion, their organizations have a moral responsibility to act as allies in their conflicts, not to encourage and exploit said struggles for profit.

The negative effect that the dog-eat-dog, reality-TV-show mentality the Valiant is cultivating has had on their team is readily apparent in their performance and faltering camaraderie, but how the esports community chooses to react to this content will be telling for the future of the industry. Audiences can revel in the stripping of pro players of any modicum of privacy, or they can condemn the transformation of pro players into reality stars.