All good things come to an end, and so does Hearthstone’s Year of the Mammoth. After Journey to Un’Goro, Knights of the Frozen Throne and Kobolds and Catacombs expanded the game’s card collection by exploringLegendary Quests, Death Knights and newly forged weaponry, a new Hearthstone year is now upon us:
the Year of the Raven.


And with every new year, changes come. Whispers of the Old Golds, One Night in Karazhan and Mean Streets of Gadgetzan will no longer be available in Standard mode when the Year of the Raven initiates.  Say goodbye to powerhouse cards such as N’Zoth, the Corruptor, Firelands Portal and Jade Idol. But fear not, three new expansions have already been hinted at by Blizzard, and the community is actively dissecting the teaser image. 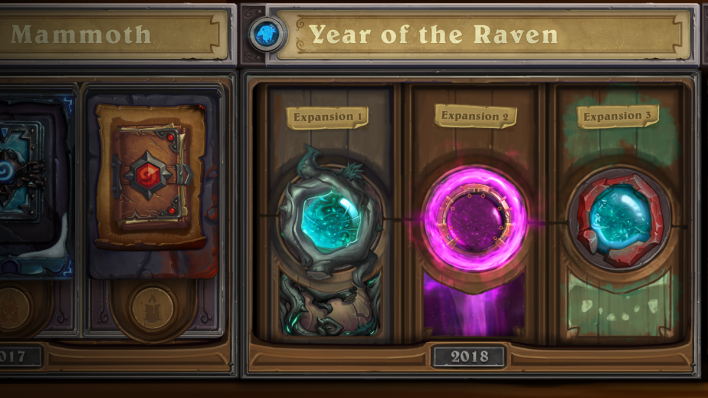 As neat as theme-guessing, revamped quests and a new Druid Hero are, two  announcements are bound to have a larger impact on the game itself in a more permanent manner.

Let’s dive into them!


Hall of Fame: The anticipated, the desired and the surprising

As expected, new cards were announced to rotate to the Hall of Fame. With the introduction of the graveyard for Basic and Classic cards last year, the Hall of Fame acts as an emergency break for cards that prove to be too dominant or prevent certain mechanics to be explored. These cards are sent to Wild mode and are no longer legal in the standard format.

First up is Ice Block, the card nearly everyone expected to be sent to the Hall of Fame. After last year’s Hall of Fame cards were announced it quickly became clear Team 5 had their eyes on Ice Block too, and as the year progressed several statements by the team enforced the idea of the card rotating.

With the Secret gone, Control-style Mages take a heavy hit by losing their most staple card. However, all is not lost, as prior to February’s balance patch, there was Big Spell Mage list going around without Ice Block in it. The Control deck relied on Arcane Artificer’s ability to generate armor alone to survive the opponent's aggression.

It’s hard to imagine that no other way of holding off damage will be printed in the future, let alone high-cost spells. So while some may shed a tear of nostalgia upon rotation, Ice Block’s rotation was as imminent as it is just.

A less-anticipated, but by many desired, addition to the Hall of Fame comes in the shape of Molten Giant. When the fiery behemoth was changed to cost 25 mana instead of its original 20, many feared the card iconic for Handlock decks would not see play anymore--justified fears, it turned out.

With Molten Giant now set to explore the vast landscape that is Wild, however, Blizzard is also reverting the change made to the card’s cost. Handlock aficionados now will be able to enjoy the deck to the fullest extent, albeit in a different game mode.

But of the cards destined for the Hall of Fame, one stands out as a big surprise. Even thoughColdlight Oracle has been a staple in Mill decks, it cannot be said those decks have been strong at all, ever.

It would appear that Blizzard’s reasoning for rotating the card to Wild comes from a combination of three factors, according to the blog:

“It offers unusually strong neutral card draw which can be detrimental to class identity. Its “downside” can destroy opponent's cards and prevent opponents from playing the deck they built—which in turn limits some designs related to Battlecry and effects that return a minion to hand.”

Whereas Coldlight Oracle sparked debates online for being included in this year’s Hall of Fame rotation, some cards play a role by surprisingly not being included in the Hall of Fame. Alexstrasza has been a powerful card since Hearthstone’s inception, being able to dish out up to 15 damage or healing up to 14 health in addition to a menacing 8/8 body. And while the card is not in any oppressive deck at the moment, it historically has been a card that enabled powerful comebacks and game-winning combos.

Contrary to Alexstrasza, Doomguard is a very prevalent card at the moment, playing a key role in Cube Warlock’s strategy. Using Skull of the Man’ari to cheat out the dreadful demon and ignore its battlecry, the deck can create huge amounts of burst to rush down the opponent. But, even if Cube Warlock is ignored, Doomguard would still make for a viable candidate. The downside of a 5 mana 5/7 with Charge has often proved to be ignorable, as the minion itself is simply too strong.

Not only were some suspect cards left out of this year’s Hall of Fame rotation, many community desired card changes did not make the cut either. Naga Sea Witch has resided in Wild for nearly a year and the card has been problematic, to say the least. After the order of cost reduction was changed players quickly found out that the card could be combined with Clockwork Giants, Mountain Giants, Molten Giants and Sea Giants to create a board filled with 8/8’s as soon as turn 5.

To prove how powerful the interaction is Tempo Storm coach Keaton “Chakki” Gill brought three decks stuffed with Giants and Naga Sea Witch to the 2018 Hearthstone Wild Open, and qualified for the next stage!

Yet the largest surprise was the announcement of a new game mode: in-game tournaments. For years, some kind of tournament mode has been topping the desired features of competitive players. However, as much as the players begged, it never came. Third-party websites such as Smash.gg and Battlefy stepped up to create brackets and easily host tournaments. It was something, but far from ideal. Websites can crash, don’t have all the necessary tools and can be more of a nuisance than a helpful tool at times.

Now the wait seems over.

Starting somewhere mid-summer the long-awaited feature enters what Game Director Ben Brode called a ‘beta’ stage, stating the mode will evolve over time as new features are added. From the image in the blog (see below) and an interview conducted by PC Gamer some information was provided of what to expect.

The only mode initially available within the tournament mode is Swiss. Generally used for large group stages at events like DreamHack, the Swiss system can go on theoretically endlessly, as long as players feel like playing. Though it’ll be a nice start and might help out in tournament qualifiers, it’s obvious a Single Elimination and Double Elimination option are a must-have to eventually run events entirely within the game client.

A hopeful sight is the chosen format on the image; Last Hero Standing. While Conquest has been the go-to for official Blizzard tournaments for years, including LHS could mean a more open-minded approach in the future. At the very least, it seems to ensure the aforementioned other tournament modes will eventually be added as well.

The number of decks a tournament requires can be changed, as seen in the above image detailing that, in that case, 3 decks are required to be brought. A big loss for the competitive scene is the fact that Tournament Mode, according to Brode, "won’t have things like bans at launch yet". This means the deck- banning phase so key to competitive Hearthstone will still have to happen verbally or through a third-party website"

In the end though, this is a major leap for the game’s competitive side. With deck checking happening in-client and the mode being able to host a significant amount of players in addition to all the aforementioned features,  a promising start will be made mid-Summer.

Do you agree with the Hall of Fame cards? What do you think about the Tournament Mode? Let us know in the comments below!

Disclaimer: The following article was written freely based on the author's opinion, and it may not necessarily represent Inven Global's editorial stance.