Since the launch of the Overwatch League, the important topic of female representation has been made a spectacle of by misinformed journalists who are uninterested in investigating the social norms which have resulted in a lack of diversity within esports. These authors and many of their readers see the lack of female players and broadcast talent in the Overwatch League as a problem Blizzard Entertainment is obligated to solve and, moreover, can easily do.

Both assumptions are incorrect.

In actuality, the absence of women from the League is not the result of institutionalized sexism on Blizzard’s part, but rather a testament to the pervasiveness of traditional gender roles in society as a whole which discourage young girls from gravitating to; enjoying; and, pursuing competitive gaming. This problem is generational and will not be solved overnight, nor in a year or even five.

"Girls simply do not have the luxury of playing online games for fun without first resigning themselves to the caveat of normalized sexism. "

Furthermore, its solution is not aided by the spread of misinformation; particularly, the assertion that developers, managers, and coaches have witnessed and subsequently dismissed (because they are evil misogynists) a thriving female pro Overwatch player demographic. Such demographic does not exist. This storyline is most commonly pushed by those who are not intimately involved in the Overwatch community but, instead, familiar with the most hyperbolic of headlines written about players like Geguri.

Geguri, by the way, is a female Overwatch player who was falsely accused of hacking in early release. She is probably a better Zarya than you. She is not, however, a better Zarya than those Zaryas in the Overwatch League, and besides, Zarya players have not been in high-demand for some time. Outside of her long dead, controversy-fueled notoriety, Geguri has done little to commend herself for the League. More importantly,  she has spoke out multiple times on not  wanting to be used as an example of League discrimination. Geguri has stated that when she was accused of hacking “no one even knew [her] gender.”

Yet, her name is peddled over and over again – as recently as January 2018, even – as an example of the rampant sexism and blatant dismissal of female talent within Overwatch.


Geguri aside, there are few noteworthy women who have strived to compete:

Team Venus, an all-female Overwatch team, was announced recently. Any of the six women included on this roster may go on to be one of the greats, or at the very least included in the League – but for now, they are relatively untested and must first grind their way through Open Division just like every other player who dreams of going pro.


177, a female Chinese pro on Lucky Future, is the one person journalists could conceivably galvanize around. She has seen the most amount of tournament success amongst women, and is one of the only women to have competed in major tournaments. But when compared to the majority of League pros – and in particular, other support players with whom she is in direct competition – she falls short.

Similarly, Kitty, a female Overwatch player who competed on France’s 2016 Overwatch World Cup team, has voiced her frustration with the current discourse regarding female representation. “Being used as a way to attack a ‘lack’ of diversity in the OWL is very frustrating. I’d rather be bad and nowhere to be seen than in the OWL because of my gender,” she wrote on Twitter.

And even similarly still, Malik and Goldenboy (both on-air talent for a variety of games, including Overwatch, and who are African-American and Puerto Rican, respectively) have expressed their frustration at having years of hard work and hustle diminished to something as generic as race. Repeatedly and in the name of blind, sensationalist activism, journalists are drowning out and disregarding the voices of those they would like to see employed.

This is not to say that the status quo is to be accepted. There is an unacceptable discrepancy between male and female players and broadcast talent in the League – but it is not a discrepancy of Blizzard’s making.

If you poll the average Overwatch League pro, then you will find that most came out of the womb with a mouse or controller in hand. They have been playing video games, and most typically FPS games, since they can remember – Halo and Half-Life, then maybe Call of Duty and Quake before Team Fortress 2 and Counter-Strike. They expressed an interest in gaming from a young age and their parents encouraged – or, at the very least, enabled – their hobby.

"A series of cultural roadblocks is extremely likely to divert women from a competitive gaming path."

Subsequently, whether initially intentionally or not, these players developed and honed for years the mechanical skill and game sense that is required to be able to pick up a new FPS and succeed in both a short timeframe and at a relatively young age.


Young daughters are not so lucky. As Ensue, a female Overwatch player, mused, “My mom didn’t bat an eye at my brother, but … tried to discourage me [from playing video games] because I’m a girl and it’s a little too violent.”

Traditionally, competitive gaming has been and is thought a masculine hobby, and games (again, particularly FPS games) are marketed towards boys. As it stands now, parents are simply less likely to introduce their young daughters to gaming than they are their young sons. Girls are also less likely to gravitate to the boy-friendly image-laden packaging (e.g. male characters, cars, weaponry, etc.) that decorates most games. These are images that boys, but not girls, are typically conditioned to like or identify with from a young age.

As such, Blizzard should be commended for their design and marketing of Overwatch. They have intentionally made the game’s cast of characters diverse, and their marketing relatively neutral. The representation of women and people of color in Overwatch is not necessarily vital for adults to enjoy the game, but it is key to enticing a more diverse future generation of players which will, in turn, diversify esports.

Furthermore, girls who do pick up and engage with typical competitive games are often dissuaded from pursuing them seriously or long-term because sexist behavior is rampant in gaming communities. Everything from the hero a woman picks to the mistakes a woman makes in-game is attributed to her gender. It is a bad look, to say the least, when girls do not feel comfortable speaking in voice chat because they know the sort of response and criticism that will arise from doing so.


Pokimane, a League of Legends player and streamer, was recently threatened with rape during a match. If an immensely popular personality and skilled player can be treated that way in-game, then imagine the response the average girl player receives.


Gaming at its core is for fun; that is where every pro’s passion began. However, girls simply do not have the luxury of playing online games for fun without first resigning themselves to the caveat of normalized sexism. As it becomes even less acceptable to behave this way in-game, more girls and women will feel comfortable competing; being active in the community; interacting with their teammates; and, building the sort of skills and connections that are necessary to become a pro.


"to decry the League as a misogynistic, racist, or otherwise overtly discriminatory institution is to insult the women and POC that have made the League so successful."

In essence, the issue remains not that women do not play games or that they are inherently bad at games or that their proven skill has been outright denied by prejudiced institutions, but that a series of cultural roadblocks is extremely likely to divert them from a competitive gaming path.

Next, regarding the lack of women as on-air talent: there are currently very few women pursuing such employment in Overwatch, but this will change within a year or two. This is where it becomes especially important to remember that Overwatch esports is very young, and its talent pool is still developing.


In other games, numerous women are employed as casters and analysts, such as Gilly in Heroes of the Storm; Pansy in PlayerUnknown’s Battlegrounds; and, Froskurinn in League of Legends. Even more women are employed as hosts or for supplemental content, including SeltzerPlease for a variety of titles; Smixity in Counter-Strike; and, currently Soe in Overwatch.

Crumbz, who currently sits on the desk, is Venezuelan, and Blizzard has previously employed a more diverse cast than we see today. Notably, the aforementioned Malik was offered a position within the Overwatch League, which he declined.

Men still outweigh women as broadcast talent, but the landscape is changing rapidly. As Overwatch grows as an esport, so too will its talent pool and the number of women (and POC) pursuing these positions. Currently, however, those who sit on the desk are those who have dedicated themselves to the esport since its release, or have otherwise proven their talent elsewhere and since jumped ship to Overwatch.

A league is more than its players

Finally, it is important to note that behind the scenes, Blizzard employs a ton of women to run Overwatch League. Women fill positions as player managers, observers, graphic designers, and much, much more. The director of esports for Blizzard is, for what it is worth, a woman named Kim Phan who earned her place in the industry after years of hard work in the Warcraft 3 competitive community.

On a similar note, diversity is not limited to male and female. Overwatch League players and their team management is far from being a homogenous body of white males, and the Houston Outlaws employ the League’s only openly gay player. Concisely, Overwatch esports is much more than its players and its broadcast talent, and to decry the League as a misogynistic, racist, or otherwise overtly discriminatory institution is to insult the women and POC that have made the League so successful. 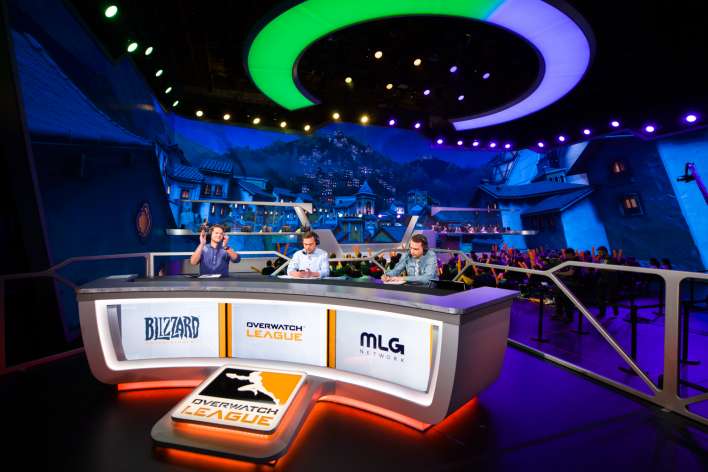 There is absolutely room for growth and improvement regarding diversity in esports. The reality that esports is a male-dominated industry is the result of complicated social norms that are rooted in the very fabric of our culture. It is not a problem unique to Overwatch, nor is it the result of any one person’s or institution’s intentional denial of diverse talent.


We can alter this reality in the coming years by doing our part to remove the stigma that gaming is “for the boys.” In being kinder and more considerate to our teammates and in stepping up when we see women – and especially young girls – being bullied out of gaming communities by brutish, sexist behavior, we can be the architects of meaningful long-term change.

EDITORS NOTE:  A small part of this article speculating on Geguri’s self-evaluation of her own skill has been edited to better reflect her quoted statements and not rumors about possible statements.

The following article was written freely based on the author's opinion, and it may not necessarily represent Inven Global's editorial stance.