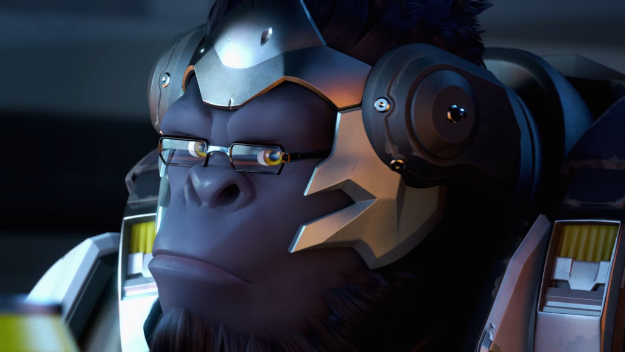 Jumping directly into any esport is a bit harrowing. You don’t know what’s going on, there’s lingo that you don’t understand, and there’s context for the player’s stories that you’ve missed. Overwatch is no different, and so for the longest time, I was terrified of diving in head first. After some gentle persuasion from a friend, I decided to bite the bullet and find out just how difficult competitive Overwatch is to follow for a new viewer.

I still don’t know if it’s called a match, a game, or what but this is the VoD I watched if you’d like to as well.

The introduction, the desk, and the context

For the first thirteen minutes, there’s a lot of explanation, informational graphics, and talking from the commenter desk, typical sports broadcast stuff. As I’m going to do with every section in this article, I’d like to break this up into its main components and see how they affect my enjoyment as someone who has never watch competitive Overwatch.

"If you have no idea who these people are, what they’re playing for, or why they’re even here, then it all eventually funnels back to ‘why should I care?"

Graphics are always a good way to present supplemental info.

Design-wise, everything here looks great. The fonts, color scheme, and overall look of the graphics are easy to read and, with one exception, get across the info they’re trying to while adding to what the casters are saying. The only thing that confused me here was this graphic in particular: 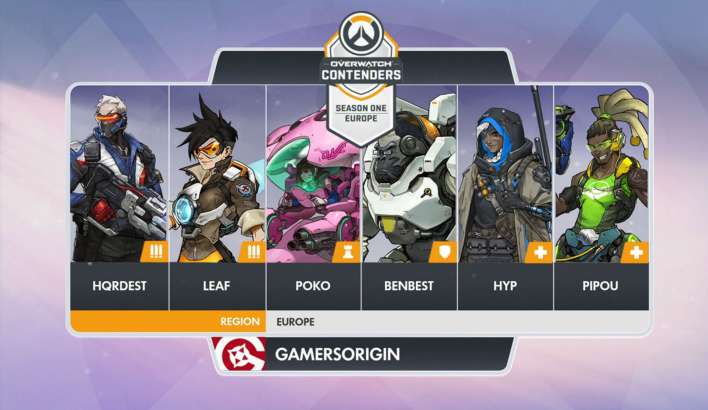 It’s possible, and let's face it very likely, I missed something here, but I’m still not 100% sure what this one is trying to tell me. I’m pretty sure they don’t draft characters, so is this a favorite hero screen or what each player is starting on? Please send me an email or leave a comment to let me know because these questions haunt me still.

Now if you want to see a graphic that really does its job, here you go: 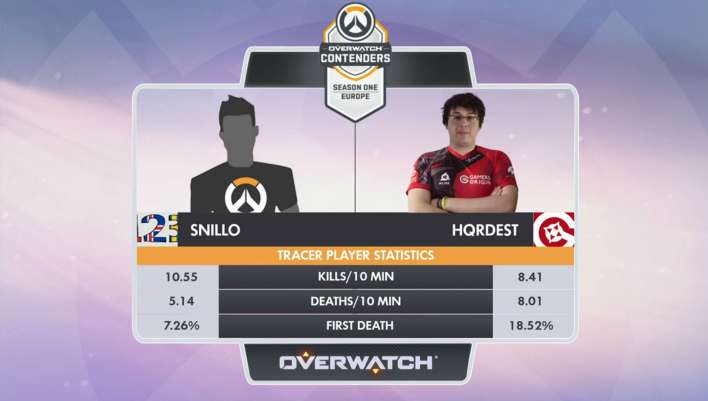 That’s just gorgeous. I get all the info I need from this and it’s perfectly labeled to let me know this is a Tracer stat comparison between the opposing Tracer players. Almost makes me tear up.

The casters and the story they tell.

The men sitting behind the desk are strangers to me, and yet they’ve helped me more than most friends. As I said earlier, my biggest worry was that I would be missing important context by jumping in blind, and within the first 10 minutes, I was handed all the information I needed to properly follow at the very least, this match.

Not all heroes wear capes. Some wear a sports jacket.

They made sure the stakes were set up from the start (that this is a qualification match for GamersOrigin but 123 had already qualified), they gave me a little bit of backstory on the players and the strategies they liked to employ, and they even took me through their predictions based on the teams’ past games and overall performance.

"Doomfist was the first character that allowed me to accurately follow what was going on."

Right off the bat, I felt like I had all the information I needed to thoroughly enjoy this game. I can’t stress how important it is for what’s going on in a game to be contextualized. If you have no idea who these people are, what they’re playing for, or why they’re even here, then it all eventually funnels back to ‘why should I care?".

With the introductions out of the way, there was nothing to stop me from enjoying the game itself.

The match starts: a carnival ride with downs, ups, but mainly ups.

If this VoD was a meal, this part would be one of those five-pound hamburgers that you get your picture on a wall for eating. There’s a lot here, you can ignore most of it at the start, and when you’re done you feel like you need a Tums, an Advil, and a cigar.

The camera is moving, things are happening, and my head hurts.

In the very first minute of gameplay, I had a headache. Not bad one, but enough of one to know that, coupled with a growing uneasiness in my stomach, I had motion sickness. I don’t often get motion sickness, and I’m no stranger to fast-paced games, but some unholy combination of camera turning, PoV swapping and angled shots did it in for me.

This isn’t the most egregious example, but this right here might as well be my kryptonite.

The thing is though after I had toughed it out for Nepal, by the time Numbani rolled around I was completely fine. I was still having issues keeping track of the action, but I could watch it without my head pounding and that was good enough for me.

And speaking of the action…

Oh yeah, it's pretty amazing. These guys are insanely good at Overwatch (who would’ve thought) and it is incredibly fun to watch them zip around each other dodging skills and making plays. Once I was able to watch and fully appreciate the plays, the character that I found the easiest to follow was surprisingly Doomfist.

It’s possible that Leaf’s fluid surety of movement, the hero itself, or me just growing more adjusted to the camera are reasons why, but Doomfist was the first character that allowed me to accurately follow what was going on. Here are a few more clips that show off just how awesome the action in these games is.

"I went into this expecting to have a bad time, and instead, I found a fun, fast-paced, crazy fps."

This is some classic McCree goodness with a sick headshot to finish it off.

An awesome retreating duel between a cowboy and a scientist.

An almost incomprehensible brawl, but boy is it exciting.

Casters, the broadcast UI, and why you should ignore most of it to start.

The casters, in the beginning, were great for me to parse what I was even looking at. But, as time went on and I got used to watching the PoVs, I stopped listening to them during fights and mainly listened to their explanations of strategy. They are of course a lot more knowledgeable about the game than me and I learned a great deal of why the teams did what they did.

The broadcast UI on the other hand…

I have no desire to learn this nor does it impact me.

I’m sure there are people who this information is useful to, and there’s no arguing that it isn’t good information for a game like Overwatch, but it is impossible to pay attention to while watching what’s going on in a team fight. Its presence doesn’t offend me, and it certainly isn’t in the way, so it's completely safe to just ignore that part of the screen entirely and focus on the dudes doing cool things with pixels.

I went into this expecting to have a bad time, and instead, I found a fun, fast-paced, crazy fps that ultimately was a good time. The casters and analysts perfectly provided me with the information to contextualize the match, the games were certainly a solid display of skilled players, and nothing felt like it was overly off-putting to me as a new viewer.

If you can ease yourself into the way the camera moves (or maybe they could just calm down a touch with the PoV changes) you’ll find a quality competitive viewing experience that needs warming up to but delivers on intense action. If you enjoy Overwatch, competitive gaming, first-person shooters, or any combination of the three and you haven’t started watching Overwatch Contenders, jumping right in is not only doable, it’s a blast.

RELATED: "EnVision Fire: "The start of Contenders season one, for us, definitely wasn't a fluke"