P1 MikeYeung on being underdog at Rift Rivals: "I won’t let player names decide how I play the game" 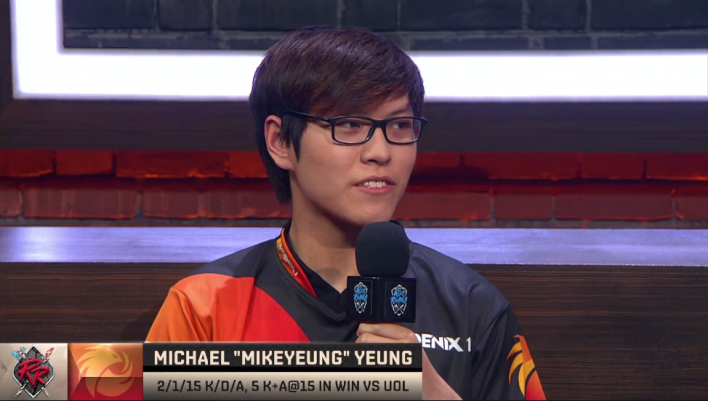 P1 MikeYeung reaffirms to himself that he could play better no matter whom he's up against.

Though they were thought to be an underdog at 2017 Rift Rivals, Phoenix1 clinched a convincing victory against Unicorns of Love after dropping to Fnatic. Specifically, MikeYeung proved that he could hold his own against EU powerhouses like UoL on his first international appearance. MikeYeung was joined by Drakos for a post-match interview for his outstanding contribution.

When asked how he felt to take down UoL despite being considered the underdogs at Rift Rivals, MikeYeung replied with a composure that’s rarely seen in new players:

“I came in with a lot of confidence because I felt that was the right mentality — play the game, be aggressive, and be scared of nothing even if you’re playing against top teams in the world like Fnatic. Even though it’s my first international event and I’m playing against experienced players who have played for years and have played against the best like SKT T1 before, I just have to come in, knowing and thinking that I can play better than these guys.”

Having confidence is one thing, but the experience playing against established teams is another. As such, the interviewer asked MikeYeung if the match against UoL was the same as he imagined:

“How I like to play games is to play without nametags. My coaching staff encourages me to do the same because I have to go by my words; I told them myself that I won’t let player names decide how I play the game.”

Regarding the transition from NA LCS to an international stage, MikeYeung positively looked on the experience because having played against top players from top teams would only going to boost up his confidence coming back into NA LCS.

The interview ended by asking him where he sees P1 finishing in Rift Rivals, to which he answered, “Coming into the event, everybody expected P1 as the 8th place NA LCS team to go 0-6, so we already proved the most of the fanbase wrong. There’s definitely going to be some memes on Reddit.”