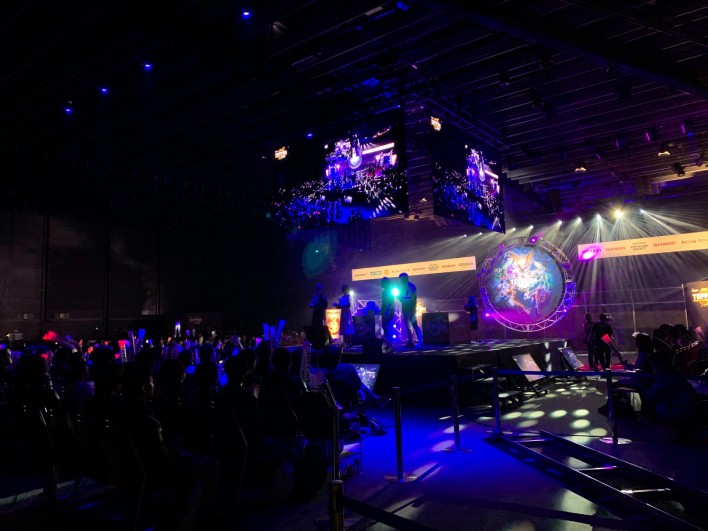 When you think mobile trading card game and esports, what comes to mind? Developer Gung-Ho and partnered publisher Capcom wants your first thought to be TEPPEN, their free-to-play card game with unique real-time gameplay

TEPPEN, regardless of its esports validity, will also have a loyal fanbase because it features some of the most iconic characters in video game history. Ryu and Chun-Li from Street Fighter, Dante from Devil May Cry, Jill from Resident Evil and X from the Megaman series are just a few of the fan favorites that define the games playable characters and cards.

But popular characters aren't enough to make a game an esports success. For that, you need gameplay that inspires competition and on December 21st TEPPEN is putting its gameplay to the test.

This holiday season, four regions (America, Europe, Asia-Pacific and Japan) are battling it out in Tokyo, Japan. Three pro players from each region have qualified for the event and one of them will be crowned 2019 champion. With a prize pool that roughly comes out to 457k USD, the stakes are high for each player involved.

Watch the tournament past broadcasts or live at Twitch.tv/PlayTEPPEN

The stakes are also high for Gung-Ho and Capcom. TEPPEN has solid esports potential thanks to its unique real-time gameplay and the booming nature of mobile games in general and the 2019 World Championship represents the companies first major esports offering.  However, while TEPPEN appeals to more hard-core players willing to embrace the challenging gameplay, most mobile gamers aren't looking for something excessively complex or skill testing.

In fact, Auto-Chess, one of the most popular competitive mobile genres, is defined by how little mechanical challenges it presents players. While the strategic elements of these games are front and center, the "auto" nature of combat makes it easy to play while on the go. Mobile games are generally considered more casual in nature but rejecting that notion is proving to be TEPPEN's biggest strength.

TEPPEN, places reaction speed, timing, and mechanics at the core of its gameplay. Capcom and Gung-Ho are obviously aware that industry reports are pointing towards the future of esports going mobile and, in Asia we already see competitive gamers flock towards mobile esports titles. As a result, TEPPEN stands as a promising title that, if embraced by fans, could become a mobile esports staple.

TEPPEN developers are already on record stating that they knew that they wanted to make a competitive mobile game and, from the looks of it, their dream is becoming a reality. The World Championships have featured some intensely close matches and the players on stage have all the adrenaline and nerves of any PC or console game.

At the end of the day, any game can be an esport, but some are easier to imagine as successful ones. The World Championship shows tremendous promise and, considering TEPPEN has already surpassed 4 million downloads this year (and there are plenty of esports advertisements within the game itself) Capcom and Gung-ho have good reason to look forward to 2020.