KRAFTON, Inc., the creator of PUBG: BATTLEGROUNDS, announced the final results of the PUBG GLOBAL CHAMPIONSHIP 2022 (PGC 2022), an in-person PUBG Esports tournament broadcast live from Dubai from 1 - 20 November. Europe roster Natus Vincere earned the title of PGC 2022 Champions, taking home more than USD $1,000,000 in prize money. Ahead of the final day of the competition, CEO of KRAFTON, CH Kim addressed the audience through a video message, announcing plans for PUBG Esports in 2023. 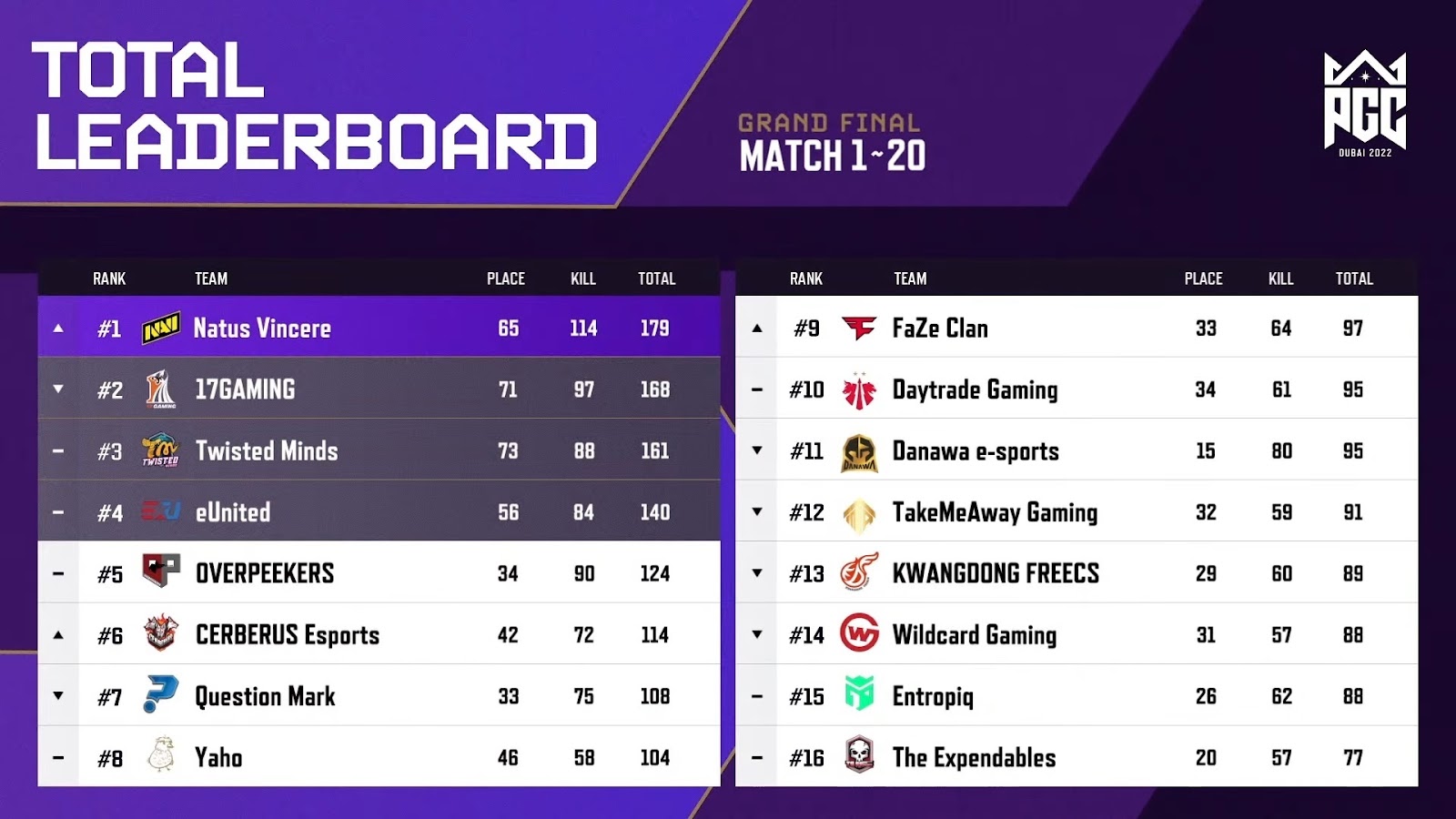 The PGC 2022 Grand Finals took place in UAE Dubai Exhibition Center from 17-20, with a live audience in attendance. The teams played 20 matches spread over 4 days of the Grand Finals and Natus Vincere came out on top with 179 points.

Up until the last day, it seemed like the first place was out of reach for Natus Vincere, but having earned three Chicken Dinners on the final day of the Grand Finals, the team earned their first PGC championship title, becoming the first team from Europe to do so.

Second place went to 17GAMING from China. They held the top place after the first two days of the Grand Finals but were pushed back to second position on the third day. Despite their fierce fight to secure the number one spot on the last day, 17GAMING ended the tournament with a total of 168 points. Europe’s Twisted Minds took the third place, with Americas’ eUnited in fourth.

MVP went to Natus Vincere marksman xmpl who made a total of 32 kills and 15 assists in just the Grand Finals. He was awarded an additional prize of USD $10,000.

Ahead of the final day of the competition, CEO of KRAFTON, CH Kim addressed the audience through a video message, announcing plans for PUBG Esports in 2023.

PUBG Global Series (PGS), which was first introduced in 2020 will be held twice in 2023, once in the first half, and again in the second half of the year. PGS was initially planned to bring top tier global PUBG Esports teams together but was temporarily switched to the PUBG Continental Series (PCS) format due to the pandemic. Participating teams will be able to earn PGC points at the PGS tournaments.

PUBG Nations Cup (PNC) will be held again in 2023. This year’s PNC resulted in 1,600,000 unique viewers, a record high viewership for a PUBG Esports tournament.

A Global Partnership Program will be launched next year. Through a thorough screening and review, KRAFTON will designate its Global Partner Teams from over 250 teams around the world. The Global Partner Teams will have custom team-branded in-game items made and will be given a slot in the PGS. A share of the profits from the sale of the items will be shared with the partnered teams.

KRAFTON is also planning to open a dedicated stadium for PUBG Esports in South Korea in the first half of 2024 to allow fans and players to enjoy PUBG Esports all year round.

CH Kim, CEO of KRAFTON said “KRAFTON will ramp up its efforts to take PUBG Esports and turn it into an iconic and cultural brand” while “defining our unique brand identity of PUBG esports and pursuing diverse collaborations”.