It's almost fixed for ADCs.

If your support is Soraka, Barrier is good too.

Don’t give him a chance to hit his Q by hiding behind minions.
Even if he uses his E, you can chase him if you use your ult.
It’s good enough if you just farm minions without needing to kill him.

Jinx isn’t that good in the current meta.
If you don't get scared of Jinx, Vayne's stronger in the late game.

Twitch is really easy to play against in the laning phase.
Still, his poison 6 stack isn’t something to ignore.
When Twitch uses his ult, go after him by using your own ult to cut him off.

Her E skill is really annoying.
If you’re hit by Q, you won’t even be able to breathe during the laning phase.

Traditional Vayne counter pick.
With her long range, she can put pressure on Vayne from the early game.
If you step on her W, you lose a spell or die.
If you push the lane like crazy, you can farm against here a lot easier.

It’s impossible to 1v1 him.
If you hit lv.6 nearly at the same time, you can win,
but the moment he gets ahead of you, it’s going to snowball like heck.

The most stylish champion of the ADCs.

All ADCs are equal in front of Vayne.

Before you start reading:

1. This isn't something to read during the draft. You need to read it thoroughly.

2. The item build is from others' strategies. I focused on understanding Vayne's skills.

3. Don't chat during games. Sometimes, the game is ruined by just chatting. Use pings. 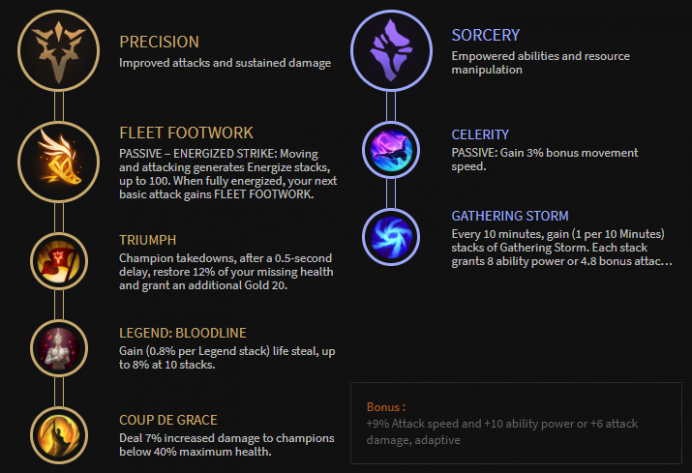 Personally, I think there’s no good runes top pick as secondary in Domination except Sudden Impact, so I go with Sorcery – Celerity – Gathering Storm. Celerity has synergy with Vayne’s passive and makes her feel lighter. Gathering Storm is also very efficient as a champion that aims for the late game. 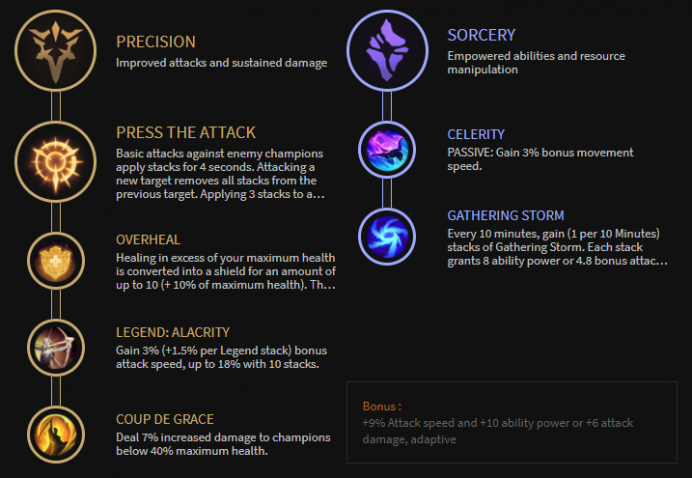 If you're confident of doing well without Fleet Footwork, Press the Attack is alright.

Normally, going with Ruined King is good (you need to buy Bilgewater first) but I don't use it.

One small mistake in trading damage is too critical.

To play Vayne, you need to understand each skill and use it properly according to the situations. There is no specific skill combo.

When her ultimate is on, the effect is triple. This is the identity of Vayne.

It’s a very thankful passive so that Vayne can assassinate the ADCs walking around.

With this, Vayne can follow opponents to hell even if they use spells.

Vayne’s signature skill, tumble. You can categorize good/bad players by seeing how well they use tumble. Tumbling forward shouldn’t be used unless it’s a really sure chance and tumbling diagonally should be used often during the laning phase. Tumbling helps parry the opponents’ non-target skills and makes it easier to kite when bruisers push in. When you’re taking the critical item build, master Q first for the most damage. The extra damage is also dealt to the towers and is very effective in many ways.

This is the main reason that Vayne is a good anti-tank champion. Silver Bolts deal damage based on the opponents’ max health every three strikes. It has good synergy with

However, it’s different in teamfights. Mostly when it comes to teamfights in mid-game or later, Vayne’s W is mastered. The DPS depends a lot on whether Vayne hits all three strikes or not. Focus your hits on the opponent champions; you can change your target, but remember to take at least three strikes per champion. When you have the chance to deal damage to the opponent DPS champions, target their ADC first; normally, the ADCs aren’t able to get away when Vayne approaches by tumbling and becomes invisible.

Vayne’s E knocks back the target and if the target collides with a wall, they’re stunned for 1.5 seconds. There’s a very important issue here. Knocking “back” the target means knocking the target away from Vayne, so if Vayne’s position is changed while Condemn is being casted, the target is flung back in the direction from Vayne. To make good use of this, using flash to change the angle to the target is very useful. This is hard to explain in words; just watch the video.

, you can make a larger angle to knock back enemies.
When bruisers like

approach during teamfights, it’s useful to push them back.
Skills like Zac’s E, Pantheon’s W or Riven’s Q are cancelled if knocked back during cast by Vayne’s E.

is strengthened triple (90 additional movement speed while chasing opponents) and this is fast enough to catch up with an opponent that’s trying to get away with spells. Also, the AD is boosted and Vayne becomes invisible when she tumbles over the duration of the ult.

With the granted invisibility, you can re-position yourself when bruisers leap at you by simply tumbling away. Also, Vayne stays invisible even if there’s a Control Ward around. It’s important to tumble to a direction that the opponent can’t predict. If you tumble to an obvious spot, there’s no point really, even if you’re invisible.

If you just understand Vayne’s skills thoroughly, you can get out of Bronze-Silver-Gold.

Critical build:
Go with the critical build if there aren’t many tank champions in the opponents. The instant damage dealt is a lot stronger than the Ruined King build so it’s very efficient to kill opponent DPS champions. It gets stronger from the third core item.

is a must and it varies from the third core. When there aren’t any bruisers(ex:

and if there is, go with

4-5 core items should be somewhat defensive.
If opponents have a lot of CC,

and if they don’t, go with

.
If the opponent ADC grew well,

,
if their AP mage scaled well,

and if you really need to survive, buy

.
However, usually by the time you revive with Guardian Angel,
the teamfight is nearly over so it’s not very recommended.

Ruined King Build:
When there are many tanky champions in the opponent team and if you’ve selected Press the Attack. Your DPS relies on the percentage damage given. Killing enemies may feel slower but it’s a lot faster killing tanks. Also, the attack speed is very fast.

.
Starting from the third core item, it changes.

has good synergy with

, but there’s an annoying item in the middle of the item tree.

is completely useless to Vayne,
so you would have to collect 1,425 gold after buying

is finished, it has a lot higher DPS than

has good synergy with

. Its item tree is more efficient than

and it has explosive damage.

For the 4-5th core item, we don’t buy items like

.
Since the attack speed is really fast, it’s better to buy life steal items.
So pick from

: If there are multiple AD assassins. Vayne's 1v1 is already strong, but it gets even more stronger.

Laning Phase:
Vayne’s goal during the laning phase is farm as much as or more than the opponent. You need to take every minion you can take. This is because her growth is based on CS. From Lv.6, you can attempt 2v2 fights. If you really don’t want to die, don’t get involved in 2v2 fights and don’t trade damage just thinking ‘I won’t die during the laning phase’.

1. If you destroyed opponent tower:
If you took down the opponent tower early, you need to roll all the snowballs you can.
Take the Drake and Rift Scuttler right away and take vision in the opponent’s jungle.
Swap lanes afterwards and put pressure on the top lane. You can even take Shelly

on the way up to push the top tower right away. If the top lane is advantageous, take a look at mid lane. If the opponent mid laner isn’t good at clearing minions, put pressure on the mid lane.
Otherwise if they're champions like

, just send the support to top lane and freeze the bottom lane to continue farming.

Continue to accumulate CS at bottom lane and do some dirty farming from time to time as well. When there are teamfights, you need to join ASAP. Buying necessary items is important as well.

It’s Vayne time. Focus your targets well at teamfights and destroy them. Positioning is important.


Positioning before teamfights start:
Keep a safe distance away from CC like

’s ultimate INCLUDING the

range.
If the opponent doesn’t have a long range initiating skill, poke at them using

who come after Vayne get focused and die. Managing to survive to continue to deal damage is better than dying trying to keep up your DPS.

Supports that have good synergy with Vayne

Janna: She has the all the abilities that Vayne likes.

Alistar: It’s very convenient when Vayne goes to the bottom with him. Even if you trade damage, your HP recovers really quickly with his passive. It’s really strong at Lv.3 and if you manage to get a kill, you can go for even more kills. CC combo is convenient too.

Soraka: Normally, Soraka trades damage very actively with her Q. When opponents dive at you, you can use your Barrier and ultimate to counter.

isn’t that good with her.