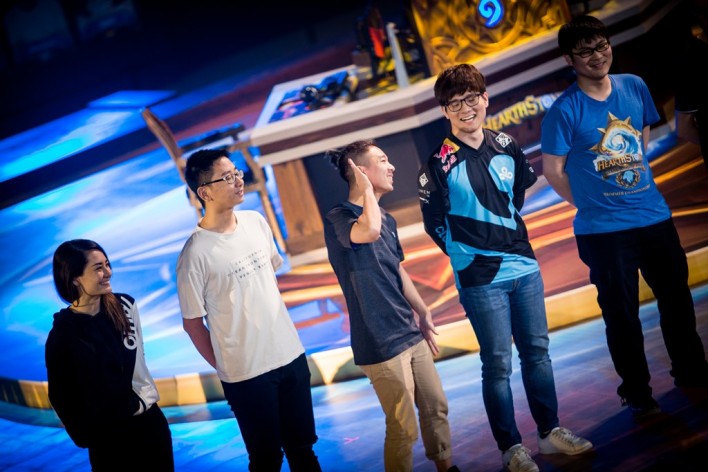 It's been a while since Hearthstone Grandmasters Season 1 crowned its regional victors, but tomorrow the wait is finally over. 48 of the best Hearthstone players in the world take to the largest stage Blizzard has provided to determine which players join their colleagues at the Global Finals at BlizzCon this year.

A new competitive format, Conquest with Shield, and group mixups compared to Season 1 are bound to expose us to butt-clenching competition. And a healthy dose of RNG-fiesta too, of course. It's still Hearthstone after all.

But before everyone can enjoy the action, we decided to make some bold predictions heading into the second season of Grandmasters. Predictions that have such a slim chance of coming true that it's straight up ridiculous to make them. But all the more fun if they end up being right...

1. Priest will have the highest win rate

It has been a while since Priest truly dominated the scene. Back when Barnes was still in Priest, and when Ragnaros or The Lich king were still around, the class sat in Tier 1 more comfortably than it ever has. After that, only Keleseth Priest came close. But the class is making a resurgance. Supported by High Priest Amet, Psychopump and the Divine Spirit + Inner Fire combo, OTK Priest is an actual, legitimate strategy. The deck is versatile and resilient, and mighty me is it powerful. Grandmasters Season 2 is Anduin's time to shine.

Statistics may indicate that Warlock is the class that sees the least amount of play—we think it's Paladin decks that will be biting the dust the most in Grandmasters Season 2. Is there some Quest Paladin deck with that could work in a strategy in the new Conquest format? Possibly. But ultimately we think it's going to be the weakest class.

3. Zalae will absolutely dominate his group

With a competitive field as strong as Grandmasters', there's always going to be a top competitor that ends the season with a disappointing result. In group B of The Americas, this turned out to be Zalae with a 4-10 score after 7 weeks of competition. But we believe in redemption. We're betting on the statistical 1 out of 8. We believe Zalae, despite his group containing fearsome competitors such as PNC, justsaiyan and Fr0zen, will crush the competition. Omnislash's veteran will read Grandmasters Season 2 like Neo read the Matrix. Go get 'em, champ.

4. SK Telecom T1 is sending another player to BlizzCon

The South Korean team SK Telecom T1 picked up three European giants before Hearthstone Grandmasters: Feno, Orange and BoarControl. They joined Surrender, the South Korean Hearthstone god to form one of the strongest lineups out there. And it paid off. Feno managed to win Hearthstone Grandmasters Season 1 in Europe, securing his spot at the Global Finals at BlizzCon. But that's not all: Surrender also was victorious, in Asia Pacific. With 50% of the roster already headed to BlizzCon, we expect another SK Telecom T1 player to make it in Season 2. It'll have to be either Orange or BoarControl, but we'll leave it to them to determine which one will join their team mates.

5. One of the competing world champions, reigning or former, will be relegated

Where one player triumphs, others must fall. In Grandmasters' current system two players are relegated per year: the players who end the group stage as the last player are kicked out. A sad occurence, of course, but it allows for new talent to rise to the big stage. As our final bold prediction we state that one of the world champions competing in Grandmasters will be relegated. This means either Firebat (2014), Pavel (2016), tom60229 (2017) or hunterace (2019) will end their respective group as the player with the fewest wins. Prove us wrong, guys!