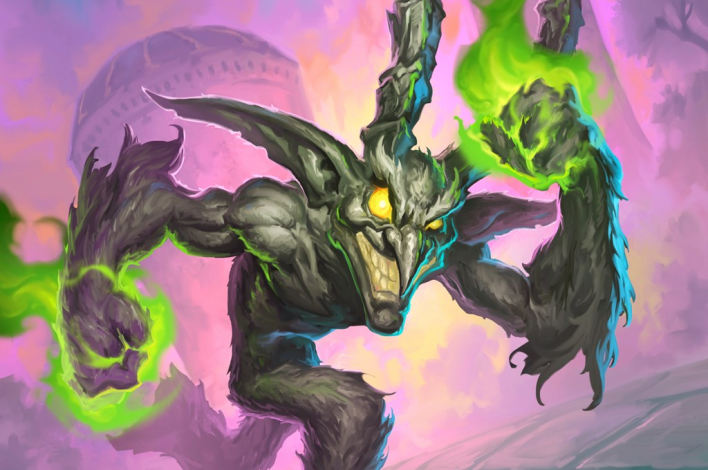 If you've ever watched Games Done Quick or another speedrunning competition, you'll have noticed one thing: all games played are in offline mode. There's always just one player trying to complete the game in record-breaking time. Understandable, as most online multiplayer games don't have incredibly compelling or speedrun-worthy campaigns anymore, and even if they do, you can't risk some stream-sniping troll to ruin it for you.

For long, Hearthstone didn't have much to speedrun. Yes, there are single player campaigns. But there are no real "game breaking" tricks one could use to make a speedrun worth watching and even if there were, randomness through things like card draw would still be an incredibly influential factor. That's not to say it hasn't been done before in some capacity—on Speedrun.com you can find an overview of all the current records. But to say it's a prominent part of Hearthstone would be a huge exaggeration.

However, for the past week, something special has been happening.

In the Tavern Brawl, the game mode with ever-changing rules, a new challenge popped up. Defeat  the eight Blackrock Mountain bosses in under an hour, and you'd get a golden copy of the Bronze Herald card. Brush off another 20 minutes and complete the run in under 40 minutes total, and you'll get a golden Recurring Villain as well.

Some... lost track of the timer and weren't sure what the requirements were: 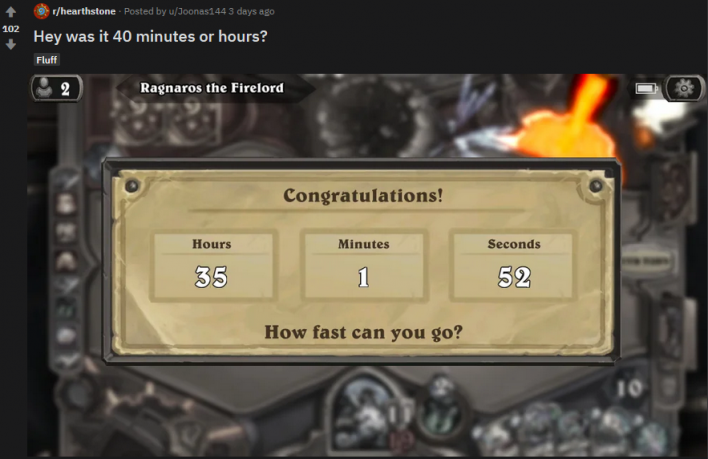 For others it got real tight, barely making it: 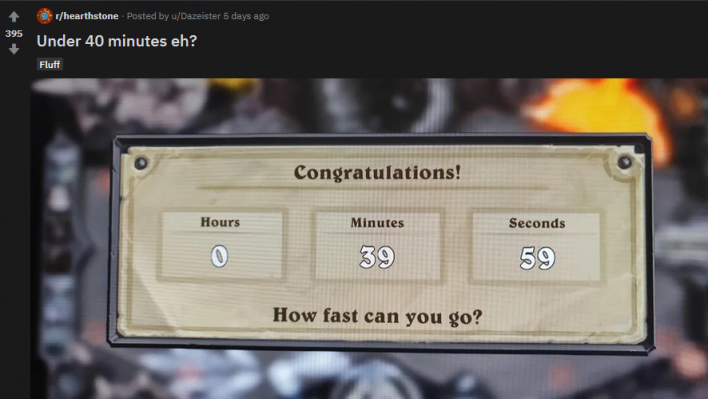 Though for the competitively driven people, a brand new challenge was handed right to them: clearing the eight levels as quickly as possible.

The thirty minute mark was met quickly. Records of 27 minutes, 24 minutes were met easily by veteran players. But the real challenge hadn't even shown itself. The hill got steeper once players tried to reach times like 17, sometimes 16 minutes:

So how far could this be stretched? Within the limits of the game, its animations and everything else, is it even possible to be faster than 15 minutes?

Well yes it is, and by quite a large margin. After player Elfir didn't only break the 15 minute mark, but the 10 minute mark—by 11 seconds—it was Japanese player TRANS who even topped that. Believed to be the current record holder, TRANS smashed through Blackrock Mountain in merely 9 minutes and 15 seconds.

Now that is fast.

The speedrunning won't disappear after just one week either. The next Tavern Brawl provides the same challenge—work your way through eight bosses—but this time players will have access to another character to play with. Let's see if an 8 minute time can be set!