While there may be many fighting games on the market, none have the visual impact of the Guilty Gear series. Legendary character design paired with frame-by-frame attention from the games' art team has made the franchise instantly recognizable.

For those who may not know you, please introduce yourself.

"I'm Akira Katano (Director). I've been involved in Guilty Gear since Guilty Gear Accent Core +R. Before joining Arc System Works, I was a player from the very beginning of the Guilty Gear series, so I first joined as a test player to check the battle balance.

After that, I started working as a planner on Guilty Gear Xrd -SIGN- and have been involved in the overall development of the game, including game design and various modes' specifications. From Guilty Gear REVELATOR, I started to take charge of direction as well."

How would you describe what you do to someone who doesn’t know the inner workings of a game or art studio?

"Basically, my main job is to coordinate the overall schedule and budget, and team assignments. At the same time, I'm also in charge of controlling the implementation of Daisuke Ishiwatari's ideas into the game.

In the Guilty Gear team, all specifications and designs are basically initiated and checked by the General Director, Daisuke Ishiwatari. However, at the time of designing, he often talks about pure ideas, and his design intentions, without technical issues or schedules. One of my other tasks is to determine the final scheme by discussing with each section's leader about technical aspects and schedule."

Despite being a 3D game, Guilty Gear has aimed to appear as 2D. Why is this important to the franchise?

"The series started out as a 2D fighting game, so we wanted to evolve the game in a way that our

fans actually want to see. We also felt that we had reached an appropriate level of fidelity with 2D graphics in the BlazBlue series.

The current visual style was born out of a desire to move in a different direction than the BlazBlue series, and to also produce a game that has a more global appeal."

How have you continued to explore the 3D space in Guilty Gear: Strive?

"A seamless 3D presentation was a goal of ours from the start. It will be readily apparent that we have also adopted the structure of Xrd's Story Mode, especially in the character intro scenes."

In Guilty Gear Xrd, “Artist Intention” was heavily focused on, giving each frame of the game hands-on attention. Is this still part of the philosophy of Guilty Gear? How have you continued to follow through on that mentality?

"Naturally, that mentality does continue to be part of our philosophy.

However, that mentality isn't common in general game development workflows, so it can be difficult to maintain it as we move to a new generation and the scale of development grows. That's why what we appreciate most is the reaction we get when we release trailers."

What new technologies/learnings have you been able to implement that lend to the visual style since the last game?

"There are so many things we could mention, but perhaps the most notable is the ambient background light and how it reflects on the characters."

The internet is obsessed with the hair and fur that you’ve been able to beautifully render in Strive. What challenges did hair pose (especially for a character like Millia Rage)?

"The way that the characters' hair and garments sway is very important in making the characters look appealing, and it was a high priority for us.

How we managed to do it was very simple. We carefully divided up the models, added a number of bones, and the designers worked hard with persistence and guts."

When adding a new character, what is important to make them feel like part of the Guilty Gear universe?

"What's important to making a new character feel part of the Guilty Gear universe isn't so much making them feel like part of the world, but giving them a unique, personality-driven design. That's what gives a character a Guilty Gear feel."

When designing a new character, do you typically have information about what role the character plays mechanically (grappler, ranged, etc) before you visually design them, or does a visual idea lead to the mechanics?

"We create the characters while keeping their mechanics, visuals, and story in mind, so there's no definite order in which we consider these points, but generally we prioritize their story, followed by their visuals, then their mechanics last."

What new character went through the most changes, artistically, from concept to finish?

"The looks for Giovanna and Nagoriyuki were decided upon relatively early on. The final visual isn't that different to the original concepts." 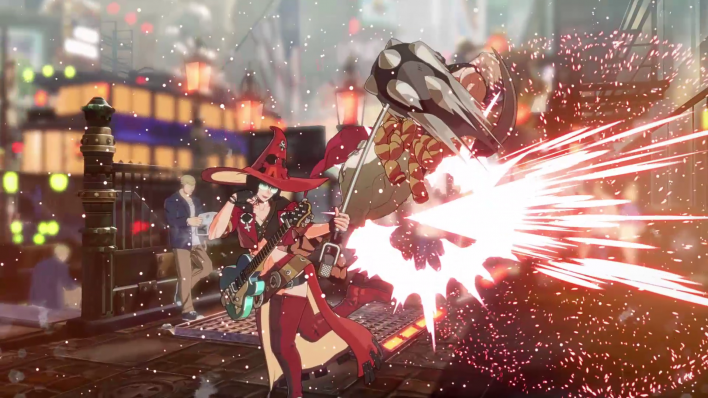 What is the most challenging aspect of balancing art and mechanics in a fighting game?

"It's important to allow for revisions of the whole process as it is happening rather than have everything set in stone from the beginning. Of course, we have a planner who writes up specification documents at the beginning, but since specifications will change for one reason or another during development, it's not uncommon for each move to be reworked.

We believe that this kind of iterative process is crucial in creating better characters, but the biggest issue is securing enough time to do the process."

What aspect of Strive’s aesthetic is your favorite?

"I have many favorites such as lighting and textures, but what I focused on the most was the facial acting and expression of the characters. This is the first time we've attempted to put multiple emotions and characterization into a single action. Please check out how we illustrated all the details of Overdrive Attacks, and more!"

What small design detail is sometimes overlooked that you really appreciate or think is interesting?

"A lot of characters' costumes in this title will differ from those seen in previous titles, but many of the changes will make sense within the context of the story. For example, there are things like badges that represent organizations to which different characters belong to, so those details will definitely be worth looking out for."

What is your response to all the amazing fan art that emerges of characters / the game you worked on?

"It makes us happy to see fans respond so positively. I'm grateful not just for the fan art, but to all those who appreciate our work."

What would you recommend to artists looking to pursue a career in game art?

tasks, but also in fact, creating 'a game.' Although it may sound unremarkable, the most important thing when developing a game is to think of the players who will play and enjoy your game once it is complete. This kind of thinking helps prevent burnout."

We here at Inven thank Akira Katano and the rest of the Guilty Gear team for their time and making this interview possible. Best of luck to all our fighting game fans out there as you dive into Guilty Gear Strive this week!