At some point during development Aphelios had 25 guns, and had minions who personally delivered new weaponry 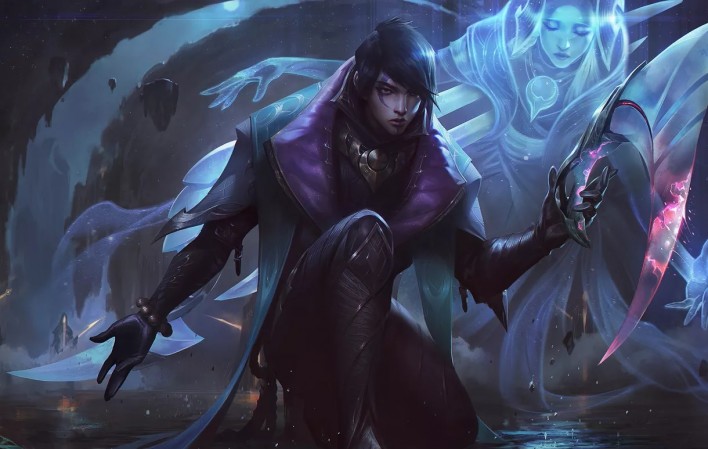 The League of Legends All-Star tournament is not only host to fun competitions between pro League players and community figures—it also offered some insider knowledge. Champion designer Stash 'Stashu' Chelluck joined the show to answer the questions James "Dash" Patterson and Mark "MarkZ" Zimmerman about the newest marksmen champion and one of the most complex champions created to date: Aphelios.

With two active abilities per gun (a special shot and a gun's personalized ultimate), and with five guns available to him, there are ten abilities to master. And then we're not even talking about the interactions between guns yet. But why such a complex champion? "No shade at marksmen players, but that pattern got a little familiar. Your abilities matter to various degrees, but you’re not doing as much thinking and planning, and a lot of strategics as some of these characters elsewhere in the game. So we wanted to bring that new dimension in full force to the marksmen role," the developer explained.

The gunman went through several designs, according to Stashu: "At different times, we had an item shop of guns fur him back in the base, they would spawn over the map… Minions would (...) cart them into your lane and there would be a new one every time." He also took a moment to comment on some of the Aphelios play seen during the NA versus EU game, where Fnatic top laner Gabriël "Bwipo" Rau displayed his skills with the champion:

He further expanded on the design process, and went over the various choices Riot's developers had to make when creating Aphelios: "It was a big challenge, triangulating, like: “What’s the right number?” Is it four, five, six, twenty-five at one point, right? The main thing though, was: we wanted to make a combo champion that had really cool, exceptional moments like we saw there. (...) That was what we’re working on: what is the number that gives us a lot of those moments, without overwhelming players.

"And then it’s also a challenge to figure out what sorts of things can we offer in those moments, that go crazy but still aren’t overwhelming, and allow the allies and enemies to track them and play around them. That’s what led to only two guns at a time, [the player] doesn’t get to control it, has them for a pretty good amount of time, (...) that sort of thing."

Stashu had a handful of tips for new players as well. He agreed with MarkZ's proposed learning strategy of not bothering to swap between weapons too much at first, but rather learn each gun's abilities first and then start worrying about interactions. Stashu also had a tip for people facing an Aphelios in-game: "Most of the time he is not gonna be moving very fast. He’s vulnerable to all-ins. The main thing is: he can’t really affect you very much, other than dealing damage, except for the gravity gun. So look out for the purple orb on his shoulder—that means he’s going to try and root you."

[LCS] GG Goldenglue: "I proved that I deserve to be here... But I'm trying to prove I'm the best."