Dog: "I almost turned down Grandmasters. (...) But just because I want to compete, I accepted the invite." 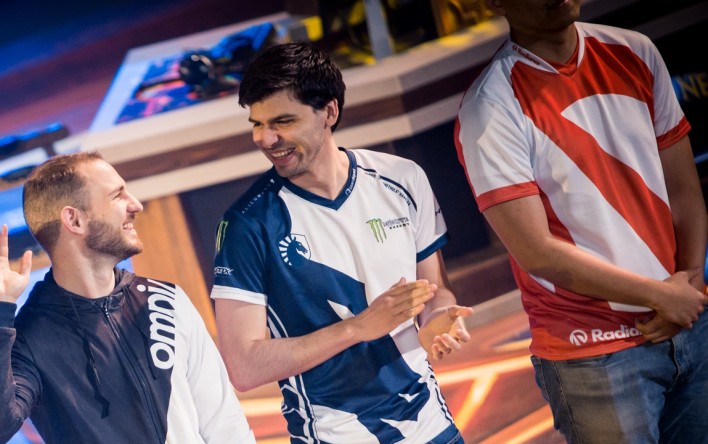 Last week, the Hearthstone World Championships concluded, and closed off a long tradition of Hearthstone Championship Tour events. No more HCT points, no more playoffs and no more seasonal championships. From now on, everything will revolve around a region-based league: Hearthstone Grandmasterst.

In Taipei, we sat down with one of the Americas region's Grandmasters: David "Dog" Caero. The popular streamer shared his thoughts on Grandmasters, why he almost turned down an invite to it, and evaluated the current Hearthstone meta.

When you heard that you were invited to Hearthstone's Grandmasters program, what went through your head?

Well I didn't know what the requirements were, but I was pretty excited about it. Obviously I want to compete in Hearthstone, which is something I haven't been able to do the past year. It was just too much to travel to all the HCT events - there were like over twenty of them. I didn't attend a single one. It just wasn't worth it, I'd rather stream. The fact that this is largely online, with only a few tournaments that have a larger prize pool, is much better for me.

What do you think of the league format? It doesn't seem as grindy and exhausting.

The thing is: When I first started playing Hearthstone I needed to grind, because I needed to make a name for myself. But at this point I don't really need to grind because I'm getting invited to events anyways. You can't really call going to HCT events a grind, since you literally have to pay for everything yourself. That's not a grind, that's an event. Grinding is more like open cups. The league format is interesting, let's see how it pans out.

Some of the most-voiced criticism is that it's pretty hard to get in the league, when you're not in it now. What's your stance on this?

I think it's a little ridiculous. The first season, no one even gets relegated right? How is anyone supposed to even join then. I don't know. I like the storyline of 'anyone can compete' and 'anyone can be good', so I think they need to open up the relegation spots. The ways to qualify [for Grandmasters]... it's fine, but realistically first zero slots and then two slots, is way, way too low. If you are bottom two, you deserve to go out. If you're bottom four, you probably deserve to go out. It's an entire league, so you get multiple chances.

[Blizzard] wants something stable, which makes sense. That's why they don't want to relegate people right away. They want people to stick with it, they want to build brands with people... They want the people who play Hearthstone and grind to create content for them. That's good for them - that's the whole reason they are doing esports. So they're investing a lot in these players, and it's why they don't want to relegate people. It makes sense from their perspective, but it stings for everyone who didn't make it and actually played Hearthstone a lot. This year is almost an off-year for those players aside from a tournament or two.

"I almost turned down Grandmasters, to be honest. I didn't really want to do it. (...)
But just because I want to compete, I accepted the invite."

For you being in Grandmasters is pretty beneficial though, right?

I almost turned down Grandmasters, to be honest. I didn't really want to do it. The only reason I did it, was because I wouldn't be able to play in any competitive esports events for Hearthstone. Other than that, I'd have turned it down because it's a big time commitment in terms of streaming etc. For streamers it's actually not worth it. But just because I want to compete, I accepted the invite.

Hearthstone esports' viewer numbers have steadily gone down over the past years. Do you think Grandmasters is the right move to increase viewership?

I think people do want recognizable names. I actually really dislike the league format of it. I'm never invested in any esports league - I just care about tournaments. That's fun. You get to follow a person throughout the tournament and you get to see the storyline. But am I really going to tune into a league every week to see one of my favorite players play? I don't really care that much. I kind of wish they hadn't gone with that approach.

As for the Specialist format - I don't know if that helps at all. Conquest was pretty easy to understand, and so was Last Hero Standing. I don't know how dumb they think people are... I guess it takes a little explaining, but honestly the explanation for Specialist is a little bit harder right? "Oh you can only change out five cards! But they have two different decks!" I don't know, that's weird to me.

Let's assume everything works out, Specialist takes off and you become known as the master of a certain deck. What does that deck look like?

I don't like locking myself into one class. I feel that, in order to be good at a game, you have to understand every aspect of it. But if I had to choose right now, I'd probably play some kind of Combo deck. Probably Chef Nomi Priest, it's a deck I just really like. I'd pick Rogue if I wanted to win, I guess. [Laughs] It has the best tech options. They can beat Control really easily with King Togwaggle and Togwaggle's Scheme, so in that case Rogue.

Last year, the developers increased the speed and frequency of making card balance changes. Let's assume that's going to keep on happening - what are the three cards you think need to be looked at?

Definitely Dr. Boom, Mad Genius. He needs to be looked at - the applied Rush effect to mechs is ridiculous. Then just probably Rogue cards. Preparation probably needs to be nerfed. The problem with nerfing cards like that though, and with Preparation specifically, is that if you nerf all the 'mana cheat' cards, you end up with "curvestone". The game becomes boring. But Preparation is busted. They nerfed Innervate, which gave you two mana, and that still sees play sometimes. Preparation gives three mana, essentially. It's insane. Last would be Raiding Party, probably. Waggle Pick in combination with all the pirates is a little too good.

We've asked this question a few times, but no one ever mentions Leeroy Jenkins. That card has been part of so much degeneracy.

I think Leeroy is fine. There needs to be a card like that, which keeps certain decks in check. It's good to have a card which makes you think: "Does he have it? Doesn't he have it?" It's a card that provides so much burst. Certain cards enable him a little bit too much, but I think Leeroy is a good card for the game.

"I quit Hearthstone for two months just because I couldn't take it.
The last expansion, Rastakhan's Rumble, didn't do anything."

What do you think of the overall power level of decks in Hearthstone now that some of the most dominant cards have rotated with Standard?

It's pretty low, you can almost just play a Chillwind Yeti. I think people are abusing the busted combos at the moment, which I guess is the way to play Hearthstone overall. It's at a good level I think, but it's difficult to judge. I just think Rogue and Warrior are too far above everything else, pushing other decks down.

The meta seems to have settled quickly. Do you think there's more room for new decks?

I think there will be nerfs soon. Probably within a month. I'm pretty sure they'll nerf Rogue. But there's probably some decks out there. Chef Nomi Priest didn't really become popular until a week ago, and that deck is really, really good. We'll see something new. I'm not sure what yet, but the other classes can't be that bad.

Archmage Vargoth was given to players before the Standard rotation happened, and shook up the meta heavily. Is that something you want to see more of?

I like it a lot. It changed the meta a lot, just one card. The game gets so stale after a while, and three months is way too long until a next expansion. I quit Hearthstone for two months just because I couldn't take it. The last expansion, Rastakhan's Rumble, didn't do anything. When the game stays the same for so long, it becomes too repetitive. Hearthstone is so simple, which is why people like it, but it can be a bad thing too if you play it often and the meta is stale. There needs to be something in the middle, whether it's a new emote or just release some cards like Vargoth.

To wrap it up, do you have anything to say to the fans that are looking forward to see you in Grandmasters?

Thanks for reading this, and thanks for all the support. I appreciate it a lot. Without you, I would be nothing. Just a shell of a man. Or a dog, I guess!