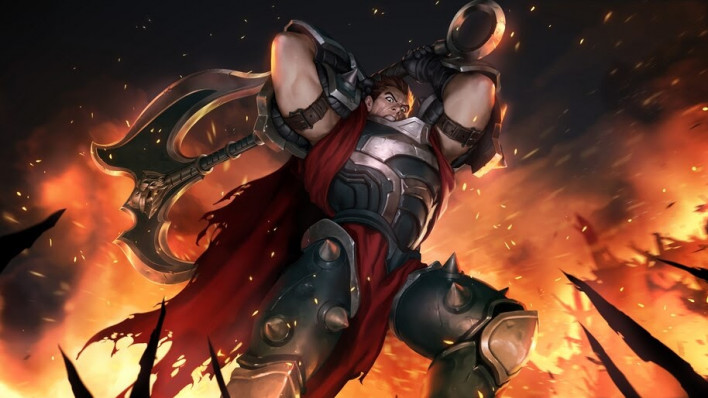 On June 23, Legends of Runeterra received its largest update since the release of the Rising Tides expansion. Patch 1.4 not only reset the ladder rank, forcing everyone to start again from scratch, but also introduced a sleugh of balance changes, aimed to shake the meta significantly.

The release made this weekend's Duels of Runeterra tournaments — one of the largest grassroots, meta-defining compeititions in the game — particularly wild. With events spanning three region shards (EU, NA, and SEA) and with the meta being completely new, the top pros faced the familiar, but tough challenge of predicting the volatile field, coming up with the best decks in just a few short days, and surviving grueling swiss and playoff stages.

Below are all three champions' decks, a total of nine lists that should help deckbuilders looking for inspiration on their ladder journeys. 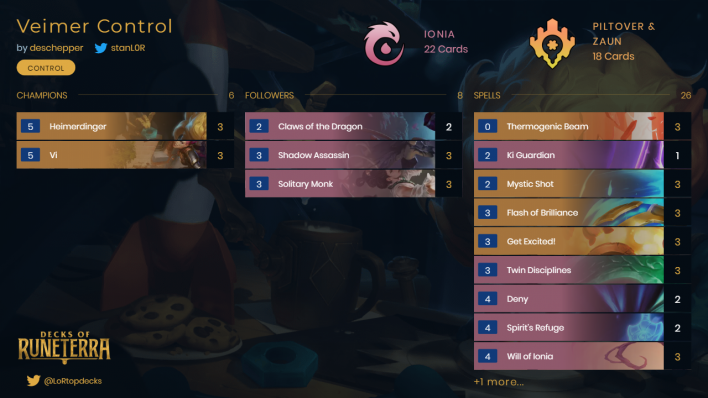 None of these decks are really new archetypes per se. Veimer Control has been the definitive control deck in Legends of Runeterra for several patches now and, in fact, it's weird that it wasn't more prominently featured in championship line-ups. Same for Frostbite Control — the slight nerf to Burn Aggro gave it some room to breathe and it's become one of the top decks to play in both tournament and ladder play.

The cool little addition is the MF/Lucian Scouts Bannerman deck. In the previous meta, players would usually choose the more standard Fiora/Garen pure Bannerman, or the MF/Quinn Scouts aggro. Now, however, the Lucian/MF hybrid is gaining a lot of traction fast, and it could be the new top Demacia midrange deck out there.

Like STAN, Random7hs used two established  and one new archetype to defeat veteran deckbuilder and competitor BruisedByGod in the finals. The fresh addition here is the Darius Aggro with Freljord splash, a deck fueled by the buffs to Darius and Basilisk Rider, which relies on quick aggretion from overwhelm monters to deal as much direct damage as possible. This sets up an early Darius level up or gets the opponent into a Decimate burn or lethal attack froM Decisive Maneuver.

The other two decks will be familiar to seasoned players: the Ezreal/Karma combo/control that lost some market share to Veimer Control is back in the winning seat, and the Sea Monsters midrange/control that has been around as a Tier S/A deck since day one of Rising Tides.

While Southeast Asia is known for its quirky meta, SEA champion High325 ran one of the more standard line-ups. His Burn Aggro list is a variation of the standard Teemo Burn, with Draven and Darius added as extra tools. The Endure Midrange has been the go-to midrange deck for almost a month now. And his Scouts list is what we've seen hundreds of times on the ladder before Patch 1.4.

It's hard to say how many of these decks will become meta-defining or Tier S. The Heimer Control and Demacia Bannermen decks seem to be here to stay, just because they're built on very solid foundations and their core cards are full-on value. The Endure Midrange still looks strong as well, as is the Frostbite Midrange.

The bigger question marks loom over older archetypes like Sea Monsters, whose strength has been fluctuating a lot since Rising Tides launch. The Darius Aggro with Freljord splash is, on the other hand, extremely new and its success might just be the result of the decades old reality of card games — when the meta is new, aggro decks rule supreme.

Disclaimer: The author of this post is associated with the Duels of Runeterra tournament series.