Greetings Adventurers,
This week we bring something designed to help you cool off in this summer heat!
Swimwear for both Male and Female classes have been added! These hot outfits are sure to keep the summer fun going all season long!
We have also tweaked the Terrmian Waterpark to fix a few issues and streamline some of the events. Hopefully this will be even more enjoyable than before!
We appreciate your continued support and strongly encourage you to continue to give us your valuable feedback!
Read on for the full patch notes!

◈ The Ferocious Nineshark that appears during Terrmian Waterpark event has been edited.

• The Ferocious Nineshark’s HP has decreased by 30%.

• When inflicted hit by the Ferocious Nineshark, Stun effect will no longer be applied.

• Attack range of the Ferocious Nineshark has been increased.

• Fixed the issue where the Nineshark Hunting Ship would rattle much.

• ※ Hunting Matchlock deals the most damage against the Ferocious Nineshark.

-Top 30 Entries will receive a "Settlement Pack" which includes:

• During the fireworks event, fireworks will light up the skies of Heidel, Calpheon, and Velia!

• You can also purchase your very own Garnier Fireworks via Pearl Shop (F3) for limited time! They will also be available in the Loyalties tab.

◈ New Rookie and Returning Attendance Rewards have been added.

◈ The chance to obtain Giant Manta Ray and Breezy Conch Seaweed from Harpooning with Terrmian Harpoon has tripled now.

◈ Swimwear Settings have been added.

• When you change from Swimwear to underwear, Swimwear Settings will be deactivated and be turned back into the Underwear Settings button.

• When Swimwear Settings are activated, other adventurers will be able to see your character’s Swimwear in safe zones and in the water.

• If you leave the safe zone or water, Swimwear Settings will be automatically deactivated.

• When Swimwear Settings is activated/deactivated, it will take approximately 10 sec for the change to appear for other adventurers.

◈ The subtitles and audio for certain cutscenes have been fixed to be played in a more synchronized manner.

• Your chance to Fish Mudskippers has increased.

• This will not affect the current chance of Fishing Terrmian Octopus.

◈ The location and gaps of the invisible platform in Terrmian Beach has been changed slightly to make it easier to step onto them.

◈ System message upon appearance of Ferocious Nineshark has been changed.

◈ The sound your character makes when using a summon scroll to summon a monster has been deleted.

◈ Fixed the issue of shadows getting too dark in certain options in-game.

◈ Fixed the graphical issue in which the island where Arena of Arsha occurs appeared to be sunk underwater when viewing it from the World Map (M).

◈ Fixed the issue where the Mysterious Creatures at the coast near Velia moved unnaturally.

◈ Fixed the issue where NPCs in Balenos and Serendia would greet the Guild Master of the guild occupying Calpheon.

◈ The torch-waving NPCs of the following territories have been removed:

◈ Fixed the issue where characters on horseback intermittently could not be controlled.

◈ You can now store [Guild] Breezy Crystal, [Guild] Origin of Wind, and [Guild] Tears of the Wind in the Inventory of a Galley.

◈ The Skill UI at the Stable has been revamped.

• Explanations for changing and deleting mount skills have been added.

◈ Fixed the graphical glitch that occurred on the bridle of the horse when wearing Terrvi Feather Champron.

◈ Text explaining the conditions under which you cannot use a Premium Horse Appearance Change Coupon has been added.

◈ We have fixed the issue where Accuracy effects were not being properly implemented on skills that require the use of summoned creatures.

• We have discovered that the Accuracy effect of the summoned creatures was not totally fixed even after having the Accuracy revisions for all classes last week and fixed the issue with this maintenance. The changes applied are as follows: 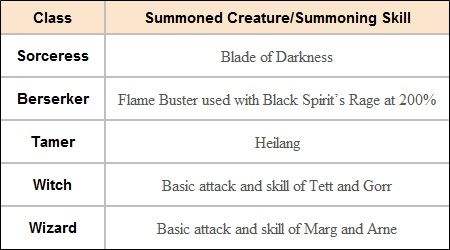 ◈ The damage inflicted by skills consuming 100% of Black Spirit’s Rage has been amended: 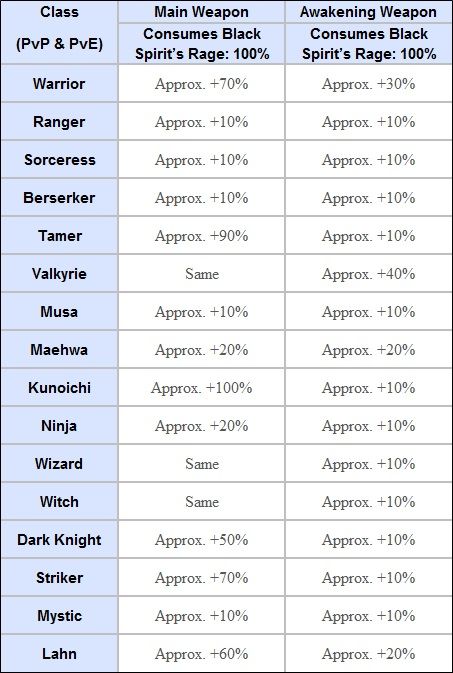 ◈ Super Armor effect has been added to the motion for absorbing Black Spirit’s Rage through Rage Absorption.

◈ You will now recover 0.15% Black Spirit's Rage per second.

◈ When you summon Heilang, Gorr, Tett, Arne, Marg, or Sea Dragon to attack or use the skills listed below, the damage stats from the Main Weapon your character has equipped will now be applied.

• The change was made to prevent the rapid switch from Main Weapon to special gear for higher damage when using following skills or Heilang, Gorr, Tett, Arne, Marg, Sea Dragon, or the followed skills:

◈ You will no longer see the effects that occur when other adventurers have 100% or 200% Black Spirit's Rage.

◈ If you hover over the white circle under the chin for adjusting the jawline in the Customizing > Face > Face Shape UI of the customizing windows, the customizable area should now be marked in blue.

◈ Fixed the unnatural reflection of your character in the water that appeared when swimming in the sea.

◈ Fixed the issue where the hair around the forehead seemed to be floating above the scalp for the 13th hairstyle in the character customization windows.

◈ The follow text has been added to the skill description of Flame Buster:

◈ Fixed the issue where the damage from Giant Leap III when consuming 100% of Black Spirit's Rage was not applied correctly.

◈ Fixed the issue where the “Spins the target on good hits (PvE Only)" effect for Severing Light was not applied while mounted.

◈ The effect applied for the downwards motion of Sanctitas de Enslar when used with Black Spirit’s Rage has been changed from Stun to Bound. The skill’s attack range has been increased.

◈ The motion and effects for Wave of Light has been changed, and charging has been added.

• If you hold the ↓ + F keys after using Wave of Light, charging will be activated. A Forward Guard effect will be applied during charging.

• After charging, the Wave of Light that was formed will attack and pull in targets again at a 25% greater range.

◈ SP requirement of the skill Verdict: Lancia lustitiae has been reduced: 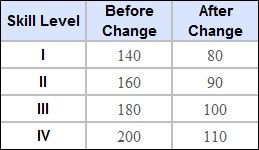 ◈ The amount of SP recovered per every good hit of Promptness has been increased from 35 to 70.

◈ The wave hits of the skill Terra Sancta have been changed to be inflicted on a single localized spot.

◈ Fixed the issue where ally characters would act as if they were hit when Psyche of Aad Sphera was used.

◈ Fixed the issue where ally characters would act as if they were hit when Controlled Madness was used.

◈ Fixed the issue where 150 Stamina was consumed upon using Stigma after Sleet Steps.

◈ Fixed the issue where the CC status effects of Divider were not applied while mounted.

◈ The CC status effects of Obsidian Ashes will now be PVE only if the skill is used while mounted.

◈ The CC skill effect for Wolf's Fang should now only be applied on the first hit.

◈ CC status effects will now only be applied to the first hit when using the basic LMB and RMB attacks while mounted.

◈ Fixed the issue where the CC status effect of Blooming Nether Flower was not applied in PVP when the skill was used while mounted.

◈ To allow you more freedom in choosing the sailing gear best suited to your personal tastes, new sailboat gears have been added. Additionally, the specs for existing sailing gear items have been improved.

• New sailboat gear have been added.

• When the new sailboat gear is equipped, your sailboat’s weight limit will be increased.

• The AP (for Elena Cannon) and equip effects of the following sailboat gear have been improved.Epheria Sailboat: Dragon Prow

◈ Stats for swimming speed increase by percentage has been added to the item descriptions for Da-Dum Da-Dum Diving Suit and Splat Fisher's Clothes.

◈ You can now exchange Fairy Wings for Sweet Honey Wine via the new NPC Ceilyn, instead of Theiah, at the Kamasylve Temple.

◈ Fixed the issue where Ultimate Elsh main weapons could not be exchanged with the Main Weapon Exchange Coupon.

◈ Just in time for the summer beaches, swimsuits and bikinis are newly added to the shop! A special Jukebox for the Terrmian bay is in as well! For details on these special summer additions and more, please check the Pearl Shop Update < Here  > !

◈ The HP of World Boss monsters will now be shared in all servers.

• Adventurers in all servers will now be fighting the same World Boss.

• As before, participation for defeating the boss and items looting will be per server.

※ World Boss monsters used to appear per server. This meant that when a boss appeared and many adventurers gathered in one server, there would be lagging. However, servers with too few adventurers had trouble defeating the boss. Now, the HP of World Boss monsters will be shared throughout all servers. No matter which server you are on and how many are fighting beside you in the server, with the help of everyone you should be able to defeat the boss smoothly.

◈ You can now change servers even when a World Boss monster has appeared.

◈ A new option to change Vision Range to be able to have a wider perspective has been added when battling the following world bosses:

-This option can be used when ‘Boss Vision Range’ button appears on the character near the world boss monster. If the distance with the world boss is too great, this option will not be available.

◈ Fixed this issue where the aim would focus on the air around World Boss Offin.

◈ Fixed the issue where PvP restriction would continue when changing servers after defeating a world boss.

◈ Text explaining that you will need 5 Energy for the herb brewer minigame required to complete the quest [Daily] Fruits of Your Labor has been added.

◈  Fixed the issue where a gauge bar UI appeared if the space bar was pressed repeatedly after succeeding at the King Clam Hammering Board minigame.

◈ Fixed the issue where Quest Summary would be abnormally portrayed when putting the mouse over the quest mark on minimap.

◈ Fixed the issue where the client would crash intermittently when changing in-game settings.

◈ Fixed the issue where the client would crash intermittently when using the character customization windows.

◈ Fixed the issue where Militia members on the opposing side would appear as allies.

◈ Fixed the issue where Pets could not fetch loot items when sea monsters were defeated by Ram skill of Sailboat/Frigate.

◈ Fixed the awkward navigation given by NPC Pavino Greko to get to an ocean liner heading to Terrmian.