Greetings Adventurers,
Going once, Going Twice, Sold! ~ This week adventurers looking to spend silver on some rare and exclusive items, should hurry on over to one of the new Imperial Auction House Managers being added in this week’s patch. While you’re perusing all the new shiny stuff up for auction, be sure to check your event challenges tab to snag the new event items introduced with the Spring Coronet event, and as always, find out all the additional details for this week’s goodies below!

◈ Spring Coronet event is on!

• In addition, go through the following quests to obtain your own [Event] Peach Flower Coronet

• Click <Here > to find out in detail the Spring Coronet event!

◈ The New Challenges (Y) that were available for new adventurers have now ended.

• The Ellie’s Mystical Lake event area has returned to its normal settings and is no longer a safe area.

• Black Spirit quest which leads you to Ellie’s Mystical Lake has also disappeared.

◈ The following items can now be sold to NPC shops.

◈ Imperial Auction House NPCs have been added to each city. 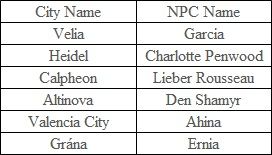 • At the Imperial Auction House, special rare items will be up for bid.

• When the auction house opens up, there will be a system message and the Imperial Auction House NPCs will start accepting bids.

• When the auction is underway, you will be able to see the Current Bid.

• While bidding is still open any Adventurer can place a higher bid, and the Current Bid value will change accordingly.

• If a higher bid is placed a minute before the bidding was to end, bidding will be extended for an additional minute.

• During that extra minute, if an even higher bid is placed, then the bidding will be extended for another minute.

• When the auctions closes and you have the winning bid, the money you pledged for the bid will be consumed and you can receive your new item from "My Bid List.”

• If you lost the bid, you can get back the money you pledged for your bid from “My Bid List.”

• The first Imperial Auction will start on the following schedule.

• Click <Here > to learn all about Imperial House Auction!

◈ Items have been added for Imperial Auction House.

• Talk to Imperial Auction House NPCs in capital cities to place your bid.

• You can simultaneously bid for all items that are currently up for auction.

• The auction continues for 10 days. If a new high bid is placed 1 minute before the end, the bidding time will be extended by 1 minute.

• If the server becomes unavailable due to emergency maintenance or for other reasons, the bidding time will be extended accordingly.

◈ The titles for Renown Score has been edited to better depict the original development intentions.

◈ The score criterion text for The Great One (formerly The Legend) has been simplified so that it doesn’t overlap with other text.

◈ Fixed the issue where the Max HP decrease debuff coming from a winning streak in Team Battle sometimes did not reset.

◈ Fixed the issue where you could not move your character after exiting the spectator mode of Team Battle’s one-on-one match.

◈ Fixed the issue where opponents in Team Battle were sometimes invisible.

◈ In the Individual Battle version of Arena of Arsha, the Max HP decrease effect depending on the matches time lapsed has been removed. Instead, the same effect will be applied to Adventurers on a winning streak.

◈ The current round will be displayed (numerically) in the Manage Matches window for Arena of Arsha’s Individual Mode.

◈ Place of Origin will be specified by the Transportation portion of the Receive Dispatch window.

◈ Fixed the issue where even regular guild members could collect Indomitable Flags.

• Guild Bonus can be set to be distributed by checking either  ‘All’ or ‘Indv.’ (Individual) option button. Note that the overall UI to set this has been changed to be more fitting for this purpose.

• However, Guild Bonus range at max 40 percent of the entire guild fund will remain the same.

• The Guild Bonus distribution formula is as follows:

◈ Fixed the issue where characters pass through some rocks or boulders in Gavinya Volcano Zone.

◈ Fixed the camera glitch that happened while talking to some soldier NPCs in Glish.

◈ Fixed the camera glitch that happened while talking to some Giant soldier NPCs in Heidel City.

◈ Fixed the issue where the camera angle for NPCs Zirara and Virara were swapped.

• Talk to the Stable Keeper or Wharf Manager NPCs where your mount or ship is checked in to use this function. You can only transport your mounts to areas you have already discovered.

• If your mount has items in its inventory, the mount cannot be transported.

• In case of sailboats, you cannot move it to areas where sailboats cannot be placed, such as a riverside.

◈ Fixed the issue where it seemed like there was a gap between the player character and the cargo of Epheria Sailboat when the character leaned on the cargo.

◈ The Instant Accel function of Peridot Forest Path Wagon will now be displayed as a skill, Forest Rush.

◈ The basic stats of Peridot Forest Path Wagon have been improved as follows: 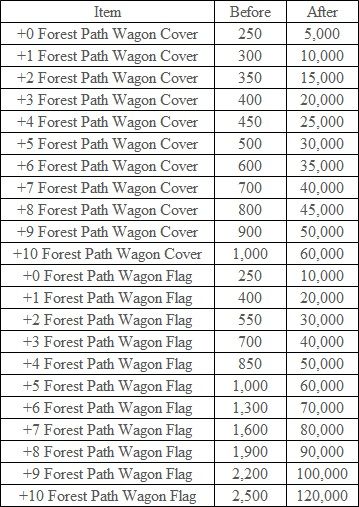 ◈ The amount of EXP for horses connected to Peridot Forest Path Wagon will now be the same as the amount the horses get from Noble Wagon and Merchant Wagon.

◈ The issue where Grapple worked once more after a CC skill is applied twice has been fixed (in PvP).

◈ Damage Reduction Bonuses according to Renown Score have been adjusted.

• This was adjusted to reduce the PvP balance differential among classes arising from Renown Score.. 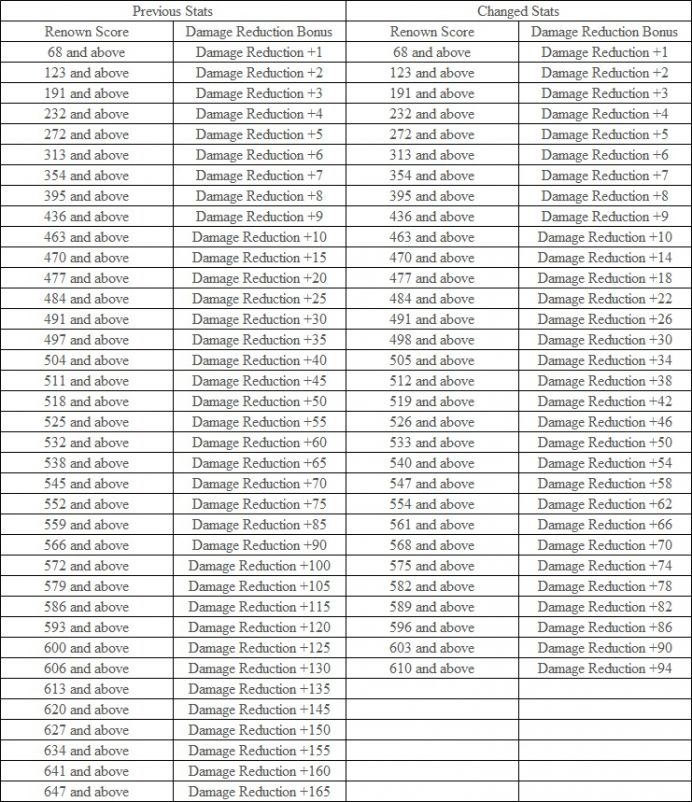 ◈ From 610 and above, every +7 increase on the Renown Score would mean +4 in Damage Reduction Bonus

◈ PvP damage inflicted by each class has been adjusted as below (Arsha Server excluded).

• As Damage Reduction Bonus has been adjusted with the Renown Score, PvP damage inflicted has also been changed accordingly. 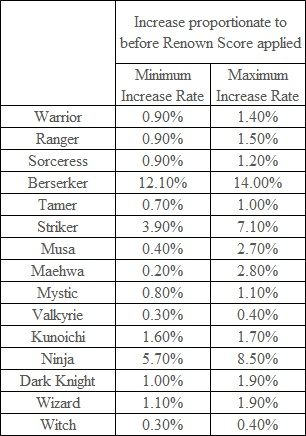 • The base damage of Air Attacks will see a decrease. As Air Attack is difficult to activate compared to Down Attack or Back Attack, the increase in damage was greater. But this made ways for specific classes to have a higher advantage and thus, we’ll reflect all things considered and make the necessary decrease.

• Due to the changes in CC skills, the base damage of a Grapple skill will also increase. Compared to other CC skills where the damage and CC effect is applied altogether upon activation, most Grapple skills inflict lower damage and thus this will see an increase.

• CC skill method of Freezing will also change. Currently, when Freezing is applied, CC count is not being applied properly so it will be changed to be counted the same way as other CC skills.

◈ More realistic physics has been applied to all characters’ capes and skirts/dresses.

◈ Fixed the issue where the helmet portion of the Binari outfit looked unnatural while fishing.

◈ Fixed the issue where you could not use the skill Absolute: Severing Light in succession while mounted.

◈ Fixed the issue where hits were not properly registered upon pressing LMB to switch to Blade combat stance while moving on a non-combat stance after learning Absolute: Slice.

◈ Fixed the issue where hits were not properly registered upon pressing LMB to switch to Blade combat stance while moving on a non-combat stance after learning Absolute: Slice

◈ Equipping Lahr Arcien Helmet with hair style No. 2, 5, 12, and 15 (from the character customization screen) will now look more natural.

◈ Fixed the issue where certain monsters sometimes would not recognize player characters.

◈ Fixed the quest Navigation to now work properly for the following quests:

◈ Icons for the following quests have been changed to fit the quest.

• A Herb to Prevent Petrifying Disease

◈ Icons for Renown Score Titles have been added.

• The icons can be checked in Inventory (I) window.

◈ The blue highlight that represents the character’s Renown Score in the Renown score window has been adjusted to be displayed in its proper place.

◈ There is an issue where Renown Score of some adventurers are shown to be higher than the actual sum and this is being looked into and fixed.