This week marks the beginning of one of the most exciting holidays: BEERFEST! Clink your cups, raise your steins, and do a dance while you enjoy the celebrations happening all around the world of Black Desert! In honor of this event we are adding a special Beer Imperial Crafting Delivery event just for you!

PvPers ready up because the new and improved Node War rules are here. These new rules should open things up a little, and create a little diversity in which nodes you fight for each day. There is a lot to unpack so please read carefully and let us know what you think!

These and other fixes and changes are coming to you right after maintenance so continue to the rest of the patch notes and explore for yourself!


*Please note that there will be no maintenance on 26th September. But as there will be new events starting on the 26th of September, please make sure to check out our official website and in-game event notice!

-You will be able to enjoy the revelries all around the world of Black Desert. (19th September After Maintenance - 10th October Before Maintenance)
-A special beer Imperial Crafting Delivery event for BEERFEST 2018 has been added. (20th September 00:00 UTC - 3rd October 23:59 UTC)
-Click  <Here > to find out this event in detail.

◈To express our appreciation to all our beloved Adventurers, we have extended Black Spirit’s Adventure. Go try your luck now!

-Event Period: 9/26 09:00 UTC ~ 10/03 Before Maintenance.
-During the event, show us your home sweet home in Grána! Decorate your Residence in any way you like, take screenshots, and share with us for a chance to win awesome rewards!
-Start purchasing your homes in Grána and try decorating it with new furniture now craftable at Grána Workshop!
-Be sure to check out the event page to be released on our official website on 9/26!

-Event Period: 9/26 09:00 UTC ~ 10/03 Before Maintenance
-During the event period, complete the Quest to help grow Young Kamasylve Tree, and collect your reward! The more trees that fully grow on more servers, the bigger your rewards will be!
-Be sure to check out the event page to be released on our official website on 9/26!

※ Titles for NPC Dating will be given out during 10/3 Maintenance as there will not be a maintenance scheduled for 9/26.

-Please click  <Here > to see the full details. (Please be advised the Wiki guide is available only in English).

◈To participate in the Node War, the Guild Master or Guild Officer must end recruitment and finish building a fort before 17:00 UTC(EU) / 00:00 UTC (NA). 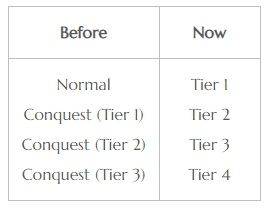 ◈Before, nodes were divided into "Normal" and "Conquest" nodes.

-That distinction is now gone and you can choose whichever node you would like fight for.
-However, you can only participate in one Node War a day.

◈There are now limits to the number of participants from each guild there can be per node tier. 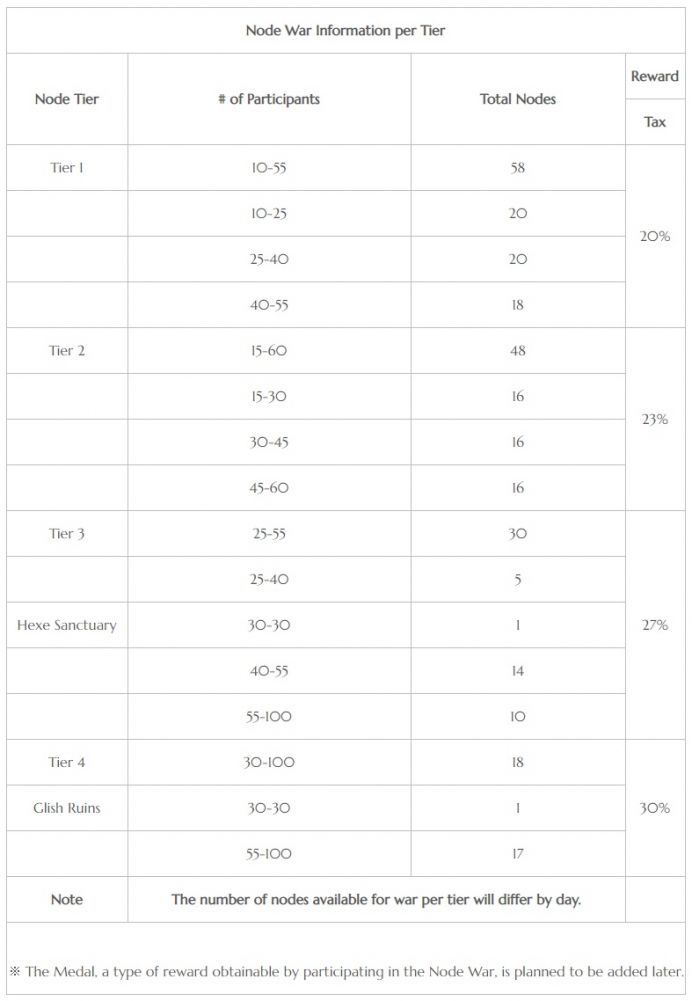 ◈After a guild’s recruitment for Node War closes, (via End Recruit button) the guild will need to choose a node and build a fort. Make sure you have the correct number of participants (including up to five extra recruits) needed to join that node’s Node War.

◈If the number of participants (including up to five extra recruits) is too little or too great, you will not be be able to build a fort.

◈You now need to be at least Lv. 35 to activate Black Spirit's Rage.

◈Fixed the strong illumination effect when the Graphics setting was not set to Remastered or Ultra.

◈Fixed the issue where you could not escape from between the rocks at Mirumok Ruins.

◈The exceeding brightness of the chandeliers at the Great Library of Calpheon has been lowered.

◈Fixed the issue where characters moved abnormally in certain terrain at the Western Valtarra Mountains.

◈Fixed the issue where the quest icon for a soldier NPC near Biraghi Den was appearing in the incorrect location.

◈The item descriptions for [Guild] Galley gear items now say that they can be used by "Guild Officer or higher," instead of just "Guild Officer."

◈Fixed the issue where you could inflict high hunting damage with a matchlock from the backseat of an elephant.

◈The amount of hit damage you inflict from the backseat of an elephant is now set, and will no longer reflect the character’s AP.

-The amount of hit damage you inflict from the backseat of an elephant has been increased by 350%.

◈Fixed the issue with sound not being applied when Witch, Wizard, Kunoichi, or Ninja crawled backwards or forwards.

◈Crawling on board ships like a Sail Boat or Galley will now be possible.

◈Fixed the issue where the camera perspective was unnatural when opening the Knowledge window (H) while your character was facing towards you.

◈Fixed the issue where the text "IMMUNE" appeared when you hit with the skill Spirit's Shackles.

◈Fixed the issue where [Ranger] Marod Star Kamasylven Sword could not be dyed in the Remastered mode.

◈Fixed the issue where the motion for crawling backwards looked awkward.

◈Fixed the issue where [Ranger] Gotha Rensa Longbow was exceedingly bright in the Remastered and Ultra modes.

◈Fixed the issue where the text "IMMUNE" appeared when grappling with the following skills.

◈CC status effect should now only be applied once when using the skill Rooting.

◈Fixed the issue where pressing the Space key while crouching triggered standing up, and not the crawling position.

◈Fixed the graphical issue with the white feathers on the back of the Noel outfit.

◈Fixed the issue where the direction of crawling was influenced by camera movement.

◈Fixed the issue where the inward side of a certain hairstyle customization looked empty.

◈Extra animation has been added so that sprinting will seem more dynamic.

◈Fixed the issue where the Witch would appear to be attacked upon using the skill Spellbound Heart near a World Boss, changing weapon, and recovering MP.

◈Fixed the issue where only the Witch class was missing skin texture in the Remastered mode.

◈Fixed the graphical issue with the neck that occurred with certain skin colors.

◈Fixed the graphical issue with the edge of the neck of the 6th face customization preset.

◈Fixed the graphical issue with the cape when using the skill Meteor Shower while wearing the Valoren outfit.

◈Extra animation has been added so that sprinting will seem more dynamic.

◈Fixed the issue where the Wizard would act attacked when he used the skill Spellbound Heart near a World Boss, changed his weapon, and recovered MP.

◈Fixed the graphical issue with the wrist when wearing [Wizard] Inquirer's Destiny Gloves.

◈It has been changed so that the following weapons now appear symmetrical.

◈Fixed the issue where the necklace of the Wind Waker outfit was exceedly bright in the Remastered and Ultra modes.

◈Fixed the exceeding brightness of the ornamental effects of [Dark Knight] Crown Eagle Vediant in Remastered or Ultra mode.

◈Fixed the graphical issue with the arms when wearing the Blazing Inferno armor.

◈Fixed the graphical issue with shoes when wearing Kzarka Gauntlet.

◈Fixed the graphical issue with the hair when wearing Canape costume with Graphics quality set to "Low."

◈Because Nodes are now divided into four tiers, the part of the item description of Node War forts referring to Node levels have been amended accordingly.

◈FIxed the issue where you could move the Fleece Decorated Dining Table without first removing any props placed on top of the table.

-Be sure to check out the Pearl Shop Update page introducing brand new items and popular return on some of your favorite items on our official website on 9/26!

◈The DP of the boss monster Giath will now increase when it is sitting to concentrate.

◈The quest requirement for "Claus Can't Contain!" has been changed from level 9 to 15.

◈The location for using the summon scroll for the main quest [Boss] Muskan of Madness should now point to inside the Bloody Monastery.

◈The message that appears when you repair a Sail Boat, Frigate, or Galley has been changed.

-Now:
Restoring the Durability of your mount will cost ___ Silver in total.
Do you want to continue?

◈The message that appears when you repair a Fishing Boat, Rowboat, or Raft has been changed.

-Now:
Lifespan of machine-type mounts cannot be restored. Restoring the durability of your mount will cost ___ Silver in total. Do you want to continue?

◈It has been changed so that the counterattack effect during combat appears more natural.

◈The "Saying of the Day" feature has been added to the Status of Alliance Members window.

◈Fixed the issue where you could not extract crystals transfused into an item in the Pearl inventory when the corresponding item slot in the regular inventory was locked.

◈It has been changed so that the default outfit preview setting in the Pearl shop will now show capes.
You can press the "Cape Setting" button to hide capes.

◈Fixed the issue where the top of the first button could not be pressed when multiple choice buttons appeared in the bottom middle of the display when chatting with an NPC.

◈Your Life Skill EXP stats in the My Information window (P) will now show up to two decimal points.

◈You can now click a notification message and it will trigger the same effect as when you click the Notification icon.

◈When you have a registered item, the Marketplace Registration Notification icon will now stay visible..

◈Fixed the issue where item descriptions in the Pearl shop was partially obstructed.

◈Fixed the issue where unnecessary text appeared in the Character Selection window when no character has been created yet.

◈Fixed the issue where the yellow highlighting effect to indicate which server you have selected would intermittently appear for two servers when you selected a server in the Server Selection window after connecting to the game.

◈You can now set whether or not you want notifications (added during the remastering of BDO) to appear in the bottom right-hand side of your display by going to:

◈In the lower left-hand side of the Guild Member Status window the text "Guild Funds" has been changed into an icon.

◈Fixed the issue where the description of items on the item exchange list intermittently did not appear when interacting (R) with a Guild Military Supply Manager NPC.

◈The notification widgets on the bottom right side of the display will now appear if you have Gamepad selected in the game Settings.

◈Fixed the issue where the client crashed when the game was minimized while the End Game window was open.

◈The videos for the Black Desert Video Guide and Skill guides are not displaying.