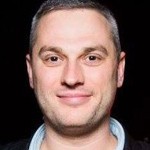 Natus Vincere (Na'Vi) is an esports organization based in Ukraine. Founded in 2009, the organization has teams and players competing in various games, such as Counter-Strike: Global Offensive, Dota 2, FIFA, World of Tanks, Paladins, League of Legends, PlayerUnknown's Battlegrounds and Rainbow Six Siege.

Their Dota 2 squad won The International 2011, becoming the most successful eSports organization at the time.

"Natus Vincere" is Latin for "born to conquer".